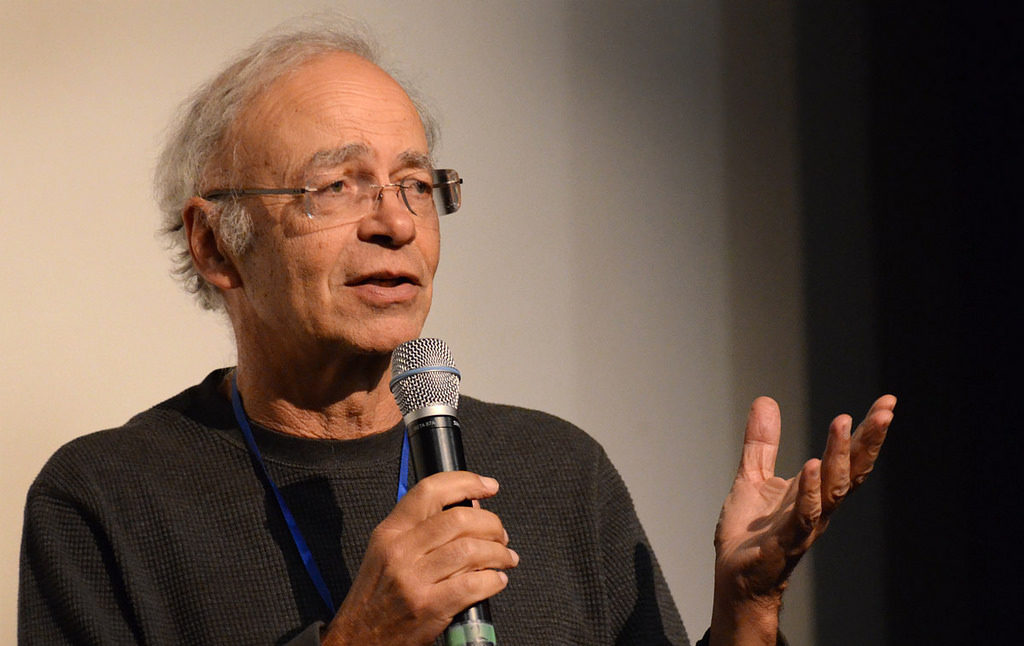 Do you know someone who’s mentally disabled?

If so, you should know that celebrated moral philosopher Peter Singer says it’s okay for them to be raped.

Peter Singer, 70, is an Australian moral philosopher who is widely celebrated and recognized with:

Singer’s latest contribution to ethics is in a New York Times op/ed he co-authored with Oxford moral philosopher Jeff McMahan, in defense of Anna Stubblefield, 45, a former professor of ethics at Rutgers University, recently convicted of sexually assaulting D.J., a 34-year-old black man with severe cerebral palsy who is non-verbal, wears a diaper, and requires assistance with common everyday tasks like bathing, eating and walking.

Although D.J. is incapable of communication, Stubblefield maintains that her use of a controversial method called “facilitated communication” enabled D.J. to express himself to her.

Note: “Facilitated communication” is a discredited technique whereby a facilitator helps a mentally disabled person to “communicate” by moving (or simply pulling) the disabled’s hand across a board showing the alphabet.

Stubblefield spent the next two years working with D.J. on his communication skills, during which time she claimed he was able to write essays and academic papers, including one which was presented at the 2010 Society for Disabilities Studies conference. She came to “love” D.J. and to believe that he loved her and wanted to have sex with her. (Daily Mail)

In May 2011, D.J. revealed his sexual relationship with Stubblefield to his brother and mother, who are his legal guardians. The family went to the police and sued Stubblefield.

In October 2015, a New Jersey jury convicted Anna Stubblefield on two counts of aggravated sexual assault on D.J., and sentenced her to 12 years in prison. The prosecution claimed that Stubblefield had exploited and raped D.J. because he is sufficiently intellectually disabled to be incapable of consenting to sex. The conviction is being appealed.

In their NYT op/ed, Singer and McMahan accuse the trial’s female judge of having prevented the defense from making a case that D.J. was a cognitively aware adult who is mentally and morally capable of consenting to sex. Singer and McMahan then argue that even if the prosecution is right and D.J. is mentally incapacitated, Stubblefield had done him no real harm in having sexual intercourse with him because D.J. is incapable of undertanding what she did. Furthermore, Stubblefield actually did D.J. “good” because he “experienced pleasure” from the sexual intercourse. The two ethicists write:

“If we assume that he is profoundly cognitively impaired … in that case, he is incapable of giving or withholding informed consent to sexual relations; indeed, he may lack the concept of consent altogether.

On the assumption that he is profoundly cognitively impaired, therefore, it seems that if Stubblefield wronged or harmed him, it must have been in a way that he is incapable of understanding and that affected his experience only pleasurably.”

As reported by Steve Weatherbe for LifeSiteNews, April 7, 2017, writing in Current Affairs, Nathan Robinson calls the ethicists’ argument one of Singer’s “most outrageous arguments yet” and that it’s Singer’s stance on the disabled that “has led some disabled people to get the not unreasonable impression that Peter Singer, perhaps the world’s most prominent ethicist, would prefer it if they died . . . . The continued presence of Peter Singer in national dialogue about disability shows just how far we have to go before people like D.J. will actually be granted their full humanity, by prosecutors and philosophers alike.”

Robinson condemns utilitarianism in general for being “meticulous and Spock-like in their deductions from premises,” which leads them to “constantly end up endorsing the moral necessity of an endless number of inhumane acts. It’s a terrible philosophy that leads to brutal and perverse conclusions and, at its worst, it turns you into Peter Singer.”

The German Nazis, too, had their brand of hedonistic utilitarianism which justified their extermination of whole groups of people, including homosexuals, gypsies, the handicapped, and Jews — whom the Nazis called the bacillus race, responsible for humankind’s moral filth and degeneracy.

“Marjorie Anna Stubblefield goes by her middle name, pronounced with an aristocratic a, as in the word ‘‘nirvana.’’ Her last name is her former husband’s. Years ago, she was Margie McClennen, an honors student who grew up Jewish in the nearly all-white town of Plymouth, Mich.”

Peter Singer, too, is Jewish. His parents were Austrian Jews who immigrated from Vienna to Australia, where he was born. Singer’s grandparents were less fortunate: his paternal grandparents were taken by the German Nazis to Łódź, and were never heard from again; his maternal grandfather died in the Theresienstadt concentration camp.

But the irony of what Stubblefield did to D.J. and the similarities of Singer’s brand of ethics with Nazism evidently is lost on the esteemed ethicist.