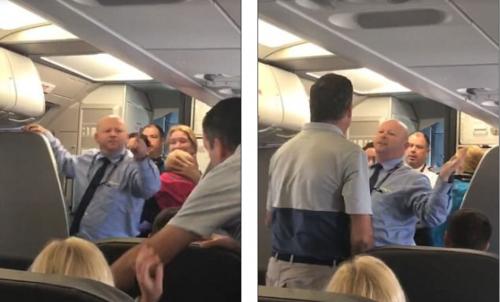 The friendly skies have become a nightmare for travelers.

Barely two weeks after United Airlines became a pariah for assaulting and forcibly dragging a ticketed passenger, 69-year-old doctor David Dao, off an overbooked flight, American Airlines made the news when a male steward hit a mother with a stroller as Flight 591 was about to depart from San Francisco to Dallas Friday afternoon, April 21, 2017.

Passenger Surain Adyanthaya took this video and posted it to Facebook.

Adyanthaya said he started filming after the flight attendant “violently took a stroller from a lady with her baby on my flight, hitting her and just missing the baby. They just involuntarily escorted the mother and her kids off the flight and let the flight attendant back on, who tried to fight other passengers. The mom asked for an apology and the AA official declined.”

In the video taken by Adyanthaya, as the mom cries uncontrollably after being hit with the stroller, a male passenger confronts a male flight attendant, saying, “You do that to me and I’ll knock you flat.”

The male passenger replies, “You almost hurt a baby!”

The passenger eventually returns to his seat and the flight attendant leaves the plane.

Adyanthaya posted another photo on his Facebook page showing the woman who was struck had two infants – believed to be twins – in her arms. She was reportedly removed from the plane, while the flight attendant who assaulted her was permitted back on the plane.

According to Reuters, American Airlines spokeswoman Leslie Scott said the incident started over a dispute as to whether the woman could bring her stroller on the flight. Witnesses said the male flight attendant told the woman she could not keep the stroller at her seat in the rear of the plane, and that she was trying to find space for it when the initial incident occurred.

American Airlines said in a statement:

“We are deeply sorry for the pain we have caused this passenger and her family and to any other customers affected by the incident.”

The male flight attendant has been suspended, while the woman and her family were upgraded to first class for the remainder of their international trip.

I’m incredulous that some commenters on the video posted on Adyanthaya’s Facebook page actually applaud what the bald American Airlines attendant did. They accuse the woman of fake crying, and blame her for not following AA rules, as if that warrants her being struck with a stroller by the attendant. I honestly don’t know what has happened to us — that increasing numbers of people seem to be turning into vicious psycho/sociopaths.

Megan Gennah Kaplan: “Maybe have some fucking respect for employees of a company and do what they ask you to do, so they don’t have to use force to do their job” (Her comment got 172 “likes”)

Shirley Carter: “These passengers are out of hand