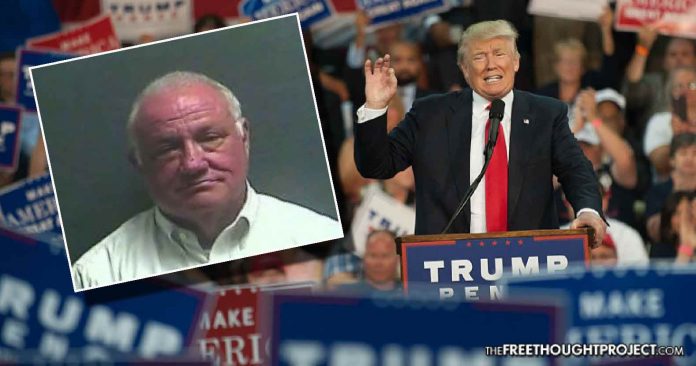 Campbell County, KY — Judge Tim Nolan of California, Kentucky represents District 5 on the Campbell County School Board. He served at the chair of the 2016 Donald Trump campaign in Campbell County. And, he’s just been charged with felony child trafficking.

Nolan is now facing charges of felony human trafficking of a minor, felony inducing a minor to engage in sex and a third count of giving alcohol to a minor.

It is unclear as of yet, just who Nolan’s customers were. However, there were many of them, as his charges include the note that the child was subjected to “commercial sexual activity.”

Nolan, who is 70-year-old, is scheduled to appear in a preliminary hearing on May 5.

During Trump’s presidential run last year, Judge Nolan was serving as the chair of his campaign. The alleged sex trafficking occurred in August of 2016 — while Nolan was working on the Trump campaign.

As RCN reports, Nolan is an outspoken and controversial figure in local politics. Last year he sued the creator of GOPfacts.org, which took aim at Nolan and others, and specifically referred to Nolan as a vehement racist and posted a photo that purported to be of Nolan in a Ku Klux Klan robe.

Nolan was appointed by Governor Matt Bevin to the Kentucky Boxing and Wrestling Commission but was removed only days later when the Klu Klux Klan scandal erupted.

Unlike Governor Bevin, however, Trump did not remove the Judge from his campaign.

According to Raw Story, Rumors of the investigation surfaced in early April when Cincinnati Enquirer reporter Scott Wartman broke the news that Campbell County Police Chief Craig Sorrell had denied an open-records request that sought documents involving any investigation of Tim Nolan.

In announcing that the state’s Special Prosecution Division would be handling the case, the office of Attorney General Andy Beshear stated that “a core mission of Beshear’s is to bring justice to the victims of rape, sexual assault and human trafficking.”

After his arrest, Campbell County Schools released the following statement:

“We are immensely troubled and saddened to hear of the arrest of Mr. Nolan and grieve as a district for those impacted. Campbell County Schools’ leadership is currently monitoring this situation and working to determine next steps. We ask the community for your continued confidence in our commitment to each and every child as we work to provide them with the highest quality education in a safe and secure setting. Our mission calls us to do ‘Whatever It Takes’ to ensure high student achievement and success in college, career, and life. We will continue with this mission, regardless of any obstacles placed before us.”

As corporate media writes off talk of ‘pizzagate’ as if it’s some tinfoil conspiracy theory that couldn’t possibly happen, recent busts of pedophilia rings are shattering their claims. In fact, after a massive bust in California, Los Angeles County Sheriff Jim McDonnell says the arrests represent a “very sad commentary on the condition we’re dealing with.”

Donald Trump even weighed in on the problem and said he decided that he won’t be party to those who deny the horrid reality that is the child sex trade.

Trump even held a press conference last month in which he detailed his plans to go after the victims of the “human trafficking epidemic,” as he explained.

Well, now Trump has a place to start — inside his own campaign.