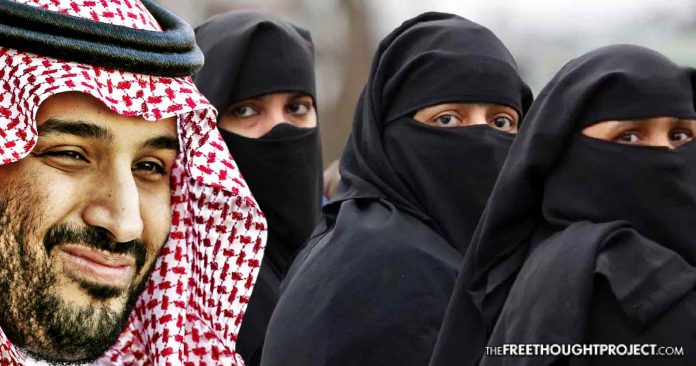 Saudi Arabia isn’t known for gender equality. In fact, the Saudi government’s idea of fair play among the sexes is ensuring women their husbands can only have three more wives. Saudi women truly have zero rights in society. Ranking Saudi Arabia among the 10-worst-countries for women, the Toronto Star wrote, “In oil-rich Saudi Arabia, women are treated as lifelong dependents, under the guardianship of a male relative. Deprived of the right to drive a car or mix with men publicly, they are confined to strictly segregated lives on pain of severe punishment.” So, imagine the surprise and dismay the world is now exhibiting with the knowledge the United Nations has elected Saudi Arabia as a member of its Women’s Rights Commission called the “Commission on the Status of Women.”

Geneva-based UN Watch president Hillel Neuer likened the election to, “making an arsonist into the town Fire Chief!” Neuer went on a Twitter tirade to drive home the significance of his opposition to allowing Saudi Arabia to have a seat anywhere near a women’s rights council.

“The news the @UN never wanted you to see—but we made it go viral. Saudi Arabia elected to women’s rights commission,” he tweeted. Calling on opponents to rise up, he stated, “But why not show moral courage & condemn this UN betrayal of Saudi women’s rights activists? UNESCO’s chief condemned its election of Syria.”

And in another tweet, he said, “How does Saudi Arabia win seats on U.N. human rights bodies? Cash & secret deals—even with adversaries like Russia.” Neuer’s reference to Saudi money, certainly a factor in buying their way onto the commission, is nothing new. The Free Thought Project has been chronicling their monetary influence for years.

Earlier this year we told you the Saudis heavily influence John McCain’s politics, leading some to question his motives for encouraging the U.S. to join the Syrian Civil War. And on the Democratic side of the two-party-paradigm, the Saudis have given millions to the Clintons. So, it should come as no surprise watch dogs like UN Watch are saying the same thing about the Saudis.

What does it mean for the world now that the Saudis have a seat at the women’s rights table? Glad you asked….UN Watch describes the election as very significant.

The fundamentalist monarchy is now one of 45 countries that, according to the U.N., will play an instrumental role in “promoting women’s rights, documenting the reality of women’s lives throughout the world, and shaping global standards on gender equality and the empowerment of women.”

The election, also, was anything but transparent. The kingdom of Saudi Arabia was elected by a “secret ballot” last week at the U.N.’s 54-nation Economic and Social Council (ECOSOC). The U.S. reportedly objected to a Saudi nomination and pressed the countries of the world to take a vote, in protest of the ECOSOC’s customary practice of “rubber stamping” nominations. Unfortunately for women, the vote passed and the Saudis were placed on the commission.

Saudi Arabia, who was exposed by the 28-pages for helping to fund the 9/11 terrorist attacks which brought down the World Trade Center’s twin towers, and who is being sued in court by families of the victims, is the same country which kills homosexuals and stones adulterers.

When 9/11 happened, instead of going after the Saudis — who made up the majority of the hijackers — the George W. Bush administration attacked and overthrew Saddam Hussein’s regime in Iraq, and destroyed the country of Afghanistan.

If you need any evidence on just how oppressive the Saudi regime is, look no further than the video below that aired on national television — an instructional video on how to beat your wife.

The video features a Saudi doctor, Khaled Al-Saqaby, who deals with the often ‘thorny’ issue of how and when to beat your wife. Al-Saqaby begins the video by telling husbands not to immediately attack their wives, but to discipline them properly first.

When speaking of how women some women say they would like to be treated with equality, Al-Saqaby called this a “very grave problem.”

He says, “The first step is to remind her of your rights and of her duties according to Allah. Then comes the second step – forsaking her in bed.”

The third step, beating, has to correspond with the “necessary Islamic conditions” before taking action.

“The beating should not be performed with a rod, nor should it be a headband, or a sharp object.”

Instead, husbands should use a ‘tooth-cleaning twig or with a handkerchief’ to beat their wife.

Hopefully, then, the wife will “feel that she was wrong in the way she treated her husband.”

At the end of the video, Al-Saqaby lets the wife-beating husbands of Saudi Arabia know that sometimes, you may have to dole out an extra beating outside of the world of just discipline. Sometimes, according to this sicko ‘doctor,’ they just deserve to be beaten.