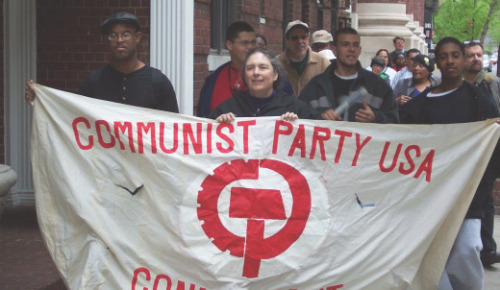 People’s World, the bilingual news site of the Communist Party USA (CPUSA), reports on April 19, 2017, that CPUSA “has been receiving membership requests ever since Donald Trump was elected President.”

Emile Schepers, CPUSA’s International Secretary and an anthropologist by profession who was born in South Africa, told Granma International that “Although the phantom of the McCarthy era still looms across the U.S., there is growing interest in communist ideas. The global financial crisis affected many people and left the sense that today’s youth are worse off than their parents. Neither recent Democratic nor Republican administrations have been able to resolve the serious problems affecting the majority of the country’s citizens. Although the United States is in no way experiencing a pre-revolutionary situation in the communist sense, capitalism is showing terminal signs worldwide.”

What Schepers neglected to say is that Marxist intellectuals have been insisting that “capitalism is showing terminal signs worldwide” for more than a century.

But how to explain the 2016 U.S. election that voted uber capitalist Donald Trump as president?

Schepers attributes that to an “ideological manipulation” that unleashed a right-wing upsurge because “popular discontent doesn’t always take a progressive route.” Even in his current home state of Virginia, not only the wealthy, but also many poor whites with “false class consciousness” voted for Trump. Schepers blames Americans’ “false class consciousness” on the corporate mass media and “local news stations in the interior of the country [that] only broadcast preachers announcing the end of the world.”

Schepers is convinced that if Bernie Sanders had been Trump’s opponent, Sanders would have won — the same avowed socialist Sanders who is a millionaire with three homes, including a $600,000 lakefront estate purchased just five days after the 2016 Democratic National Convention that selected Hillary Clinton as the party’s presidential candidate.

Schepers admits that the great challenge for CPUSA continues to be organizing American workers and trade unions.

CPUSA stopped offering its own candidate in US presidential elections years ago. Instead, CPUSA has endorsed Democratic Party presidential candidates in every election since 1988, beginning with Michael Dukakis to Hillary Clinton in 2016.

The CPUSA opposes U.S. militarism and supports the Palestinian cause, the Cuban Revolution and more recently the Bolivarian Republic of Venezuela — the same corrupt regime that mismanaged and destroyed the Venezuelan economy, and ignores and suppresses the tens of thousands of Venezuelans who protest and march against the government. Way to go, CPUSA!

Unlike Emile Schepers, the Democrats who have gone over to the Communist Party USA at least are honest, as the Democrat Party long ago had morphed into the communist party in all but in name. See: