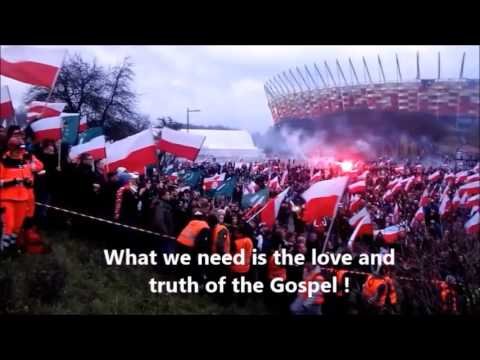 News you didn’t see on the MSM-Deep State Media.

On November 11, 2015, some 25,000 to 50,000 Polish nationalists peacefully marched in Warsaw, Poland, to mark the country’s return to independence after the First World War, to uphold Poland’s Christian civilization, and against the Muslim invasion of Europe.

The 50,000 figure is that of the march organizers.

The rally was held under the slogan, “Poland for the Poles, Poles for Poland”, in reference to the ongoing “migrant” invasion.

Chanting “God, honour, homeland” and “Yesterday it was Moscow, today it’s Brussels which takes away our freedom,” the marchers trampled on and burned an EU flag, and held banners that read “Great Catholic Poland” and “Stop Islamisation”. (Breitbart)

Even Snopes admitted that the march received sparse news coverage, reported by only Bloomberg and U.S. News and World Report, and in Europe, by Telegraph, Express, Financial Times and RT.

One would think that a march that massive, of tens of thousands of people, would warrant at least a mention in the New York Times, or Washington Post, or the alphabet TV news.

It is also ironic that instead of the countries of western Europe, it is Poland — a former communist party-ruled country that was officially atheistic — that defends Christianity.