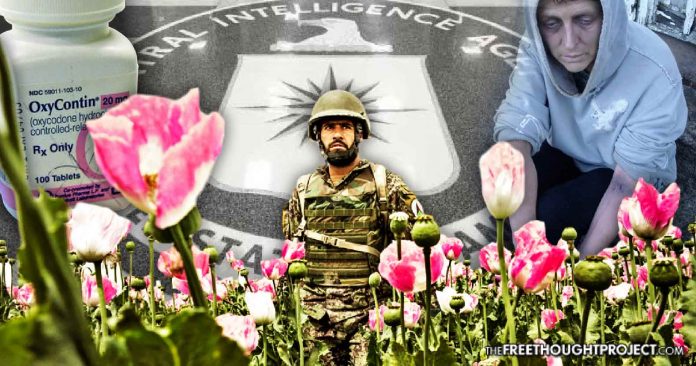 Richard Nixon, in his effort to silence black people and antiwar activists, brought the War on Drugs into full force in 1973. He then signed Reorganization Plan No. 2, which established the Drug Enforcement Administration (DEA). Over the course of five decades, this senseless war has waged on. At a cost of over $1 trillion — ruining and ending countless lives in the process — America’s drug war has created a drug problem that is worse now than ever before.

This is no coincidence.

For years, those of us who’ve been paying attention have seen who profits from this inhumane war — the police state and cartels.

This horrendously corrupt and violent drug war has gotten so bad, that it is getting pushed into the mainstream. In an extremely rare move, A&E Networks, a subsidiary of ABC and the Walt Disney Company, will be addressing the government’s role in the drug war in a four-part documentary series on the History Channel, titled, “America’s War on Drugs.”

In this documentary, History channel promises to delve into items that, up until recently, were considered ‘conspiracy theory.’ CIA drug dealing is one of those such items. According to the description on A&E:

“America’s War of Drugs” is an immersive trip through the last five decades, uncovering how the CIA, obsessed with keeping America safe in the fight against communism, allied itself with the mafia and foreign drug traffickers. In exchange for support against foreign enemies, the groups were allowed to grow their drug trade in the United States.

Promising to be one of the most explosive television series in recent history, the show intends to expose the CIA’s connection to the crack epidemic.

Night one of “America’s War on Drugs” divulges covert Cold War operations that empowered a generation of drug traffickers and reveals the peculiar details of secret CIA LSD experiments which helped fuel the counter-culture movement, leading to President Nixon’s crackdown and declaration of a war on drugs. The documentary series then delves into the rise of the cocaine cowboys, a secret island “cocaine base,” the CIA’s connection to the crack epidemic, the history of the cartels and their murderous tactics, the era of “Just Say No,” the negative effect of NAFTA, and the unlikely career of an almost famous Midwest meth queen.

If the CIA trafficking cocaine into the United States sounds like some tin foil conspiracy theory, think again. Their role in the drug trade was exposed in 1996 in a critical investigative series “Dark Alliance” by Gary Webb for the San Jose Mercury News. The investigation, headed up by Webb revealed ties between the CIA, Nicaraguan contras and the crack cocaine trade ravaging African-American communities.

In the book, “Pablo Escobar In Fraganti,” Escobar, who lives under the pseudonym, Juan Sebastián Marroquín, explains his “father worked for the CIA selling cocaine to finance the fight against Communism in Central America.”

Going even further down the rabbit hole, the History Channel will address how US involvement in Afghanistan turned the country into a virtual heroin factory and how the drug war empowers cartels.

The final chapter of the series examines how the attacks on September 11thintertwined the War on Drugs and the War on Terror, transforming Afghanistan into a narco-state teeming with corruption. It also explores how American intervention in Mexico helped give rise to El Chapo and the Super Cartels, bringing unprecedented levels of violence and sending even more drugs across America’s borders.

The reason why the drug war actually creates a drug and violence problem is simple. And those who profit most from the drug war — drug war enforcers and cartels — all know it. When the government makes certain substances illegal, it does not remove the demand. Instead, the state creates crime by pushing the sale and control of these substances into the illegal black markets. All the while, demand remains constant.

We can look at the prohibition of alcohol and the subsequent mafia crime wave that ensued as a result as an example. The year 1930, at the peak of prohibition, happened to be the deadliest year for police in American history. 300 police officers were killed, and innumerable poor people slaughtered as the state cracked down on drinkers.

Outlawing substances does not work.

Criminal gangs form to protect sales territory and supply lines. They then monopolize the control of the constant demand. Their entire operation is dependent upon police arresting people for drugs because this grants them a monopoly on their sale.

However, the illegality of drug possession and use is what keeps the low-level users and dealers in and out of the court systems, and most of these people are poor black men. As Dr. Ron Paul has pointed out, black people are more likely to receive a harsher punishment for the same drug crime as a white person.

This revolving door of creating and processing criminals fosters the phenomenon known as Recidivism. Recidivism is a fundamental concept of criminal justice that shows the tendency of those who are processed into the system and the likelihood of future criminal behavior.

The War on Drugs takes good people and turns them into criminals every single minute of every single day. The system is setup in such a way that it fans the flames of violent crime by essentially building a factory that turns out violent criminals.

The system knows this too — as the very existence of the police state is dependent upon the drug war. When drugs are legal, there are far fewer doors to kick in, fines to collect, profit prisons to fill, and money to steal.

When drugs are legalized, gang violence drops too — drastically. Not only does it have a huge effect on the localized gangs in America, but the legalization of drugs is crippling to the violent foreign drug cartels too.

This is why the Free Thought Project and other open-minded groups all advocate bringing this bloody and criminally ineffective drug war to a sudden and grinding halt.

Hopefully, the History Channel’s new documentary will push others to question drug laws. Hopefully, the documentary wakes people up the idea that legality does not equal morality and that government force, via kidnapping, caging, and killing, is no way to solve an addiction problem. Hopefully.