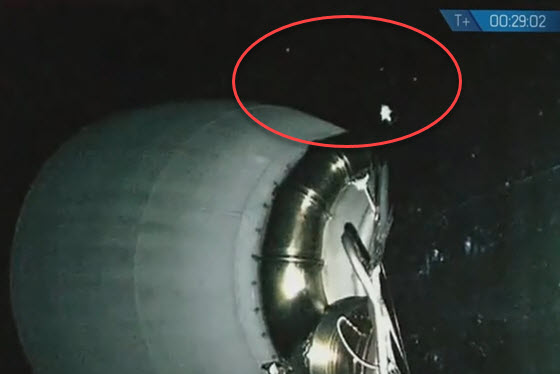 Something really fishy is going on with SpaceX. A lot of people are starting to wonder if the first attempts at a civilian space program are being deliberately sabotaged by the military-industrial complex or even a deep state with a secret space program they do not want exposed.

Either way, weird things keep happening around SpaceX launches, including many many random unexplained failures, explosions, and now… UFOs.

During the most recent SpaceX satellite launch a couple weeks ago, a mysterious object in a triangle formation appears and hovers over the satellite… and instantly the feed gets cut.

Secureteam 10’s Tyler Glockner pointed out: “These are not stars and in no other part of this footage will you see stars,” adding “They immediately cut to this animated tracking system, for a few moments, almost as if they are giving it just enough time, for this UFO to move out of sight, before they immediately cut back to the fed of the rocket.

“Considering that Space X has received over $1 billion in government funds to launch satellites and send supply rockets for NASA, it’s not too surprising that they shut the feed down. The government has too much control over them.”

“Anyone else surprised and disappointed to see Space X hiding info from the the public like cutting their live feeds? I would have thought a Elon Musk would be more interested in getting the truth out there.”

Yeah… so would we.