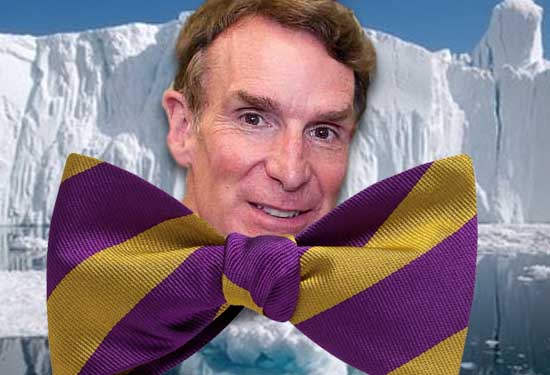 The myth that is overpopulation is already starting to unravel before our eyes, just as predicted years ago. The propaganda will only work on the masses for a few more years before the mathematical reality will render it impossible to believe anymore.

Birth rates have now officially declined below the necessary 2.1 replacement rate to maintain population in most every developed country in the world, with some Asian country birth rates now so low, their governments are actually attempting to pay the population to reproduce. China even relaxed its one child policy to two children. (They did the math.)

Enter Bill Nye the Propaganda Guy (as in, Bill Nye the Authoritarian Carbon Tax Guy or Bill Nye the “Try ‘Climate Change Deniers’ as War Criminals” Guy), our used-to-be friendly, bow tie wearing rabid anthropogenic climate change pusher, who is now casually discussing with bioethicists on his new show how people in less developed countries should maybe be punished for having “extra kids”.

Nye asked one of the panelists on the Tuesday episode of his Netflix show “Bill Nye Saves The Earth” if it would be a good idea to have the government penalize having “extra kids.”

“Should we have policies that penalize people for having extra kids in the developed world?” Nye asked Travis Rieder, an academic for Berman Institute of Bioethics at Johns Hopkins University.

“I do think we should at least consider it,” said Rieder, who believes that limiting the size of families is paramount to fighting global warming.

Nye goes on to say, “Well at least consider it is like ‘do it’.”

So damn smug. What exactly is an “extra kid” and why do eugenicists always want to penalize poor people in poor countries for having kids?

The type of penalization Nye is talking about is likely the financial kind that makes climate change scare-a-tologists like Al Gore richer but ultimately doesn’t really do anything to address actual environmental issues.

One of the chief reasons birth rates are so high in less developed countries in the first place is because the infant mortality rates are also dramatically high while life expectancy rates overall are drastically lower than in developed nations, but of course “scientists” like Nye never ever bother to point this fact out.

Come on, Nye, haven’t less developed nations like India and the ones in Africa been punished enough with all the paralyzing and deadly vaccines that have been pushed on them by your fellow eugenicist billionaire Bill Gates? Is that not lowering the population fast enough for you there Nye??

By the way… what is Nye even a “scientist” of anyway? Does anyone even know? Anyone can put on a white lab coat, it doesn’t make them a scientist.