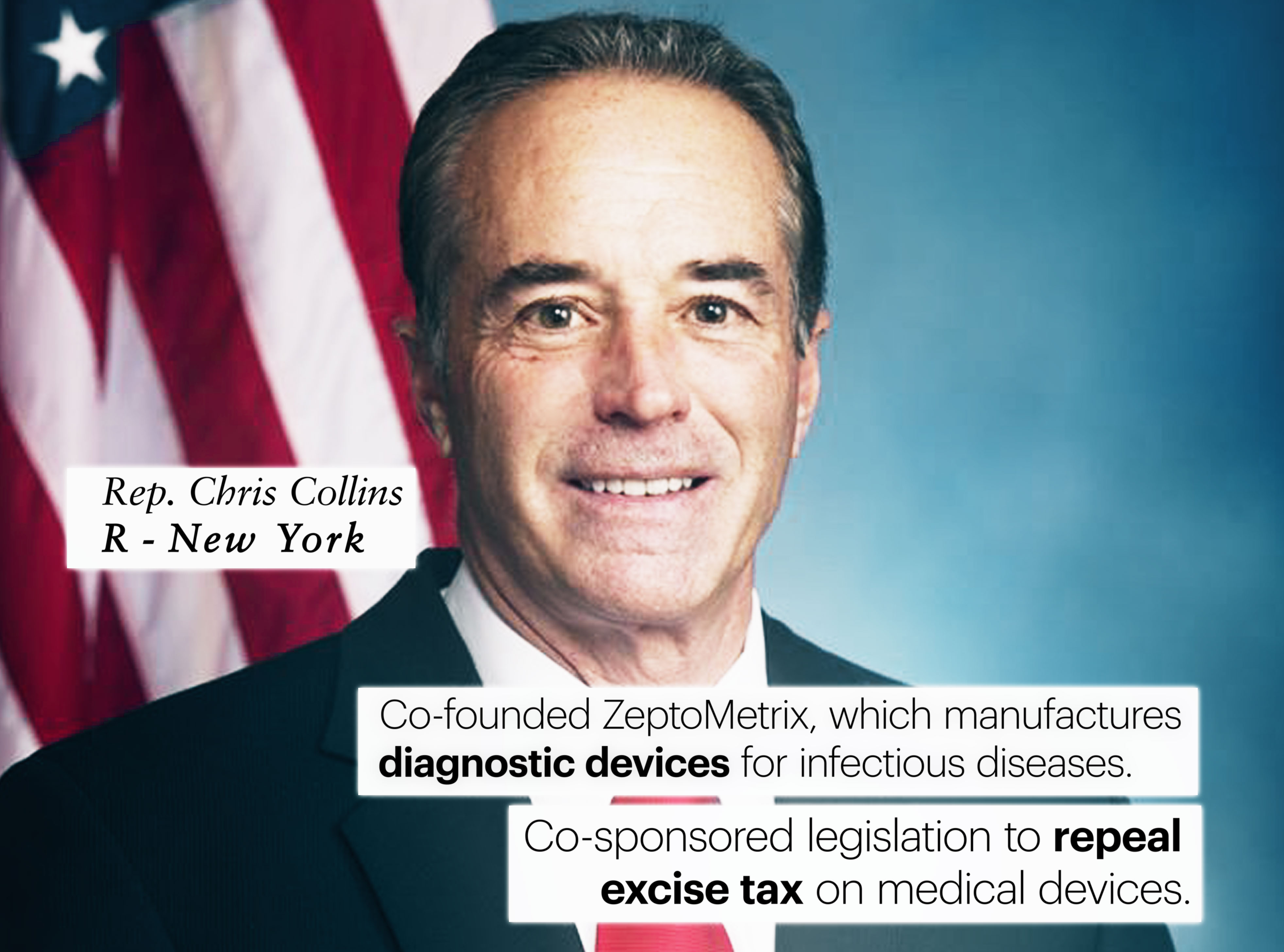 (ANTIMEDIA) Representative Chris Collins of New York is by no standards a dominant member of the House. He sits on the Committee on Energy and Commerce, but he’s not a chair of any of the subcommittees. In early 2016, however, he raised eyebrows as the first congressman to endorse Donald Trump. He was briefly a surrogate for the president, and Fortune ran an article stating Trump had tapped him to be his “eyes and ears” in Congress. However, that only seemed to apply during the transition, as Devin Nunes (R-CA) quickly rose to power as Trump’s congressional insider.

Collins’ visibility in the house may be rising following a recent investigative piece by The Daily Beast that uncovered some corrupt skeletons rattling around in his closet. The piece detailed Collins’ holdings in Innate Immunotherapeutics, an Australian drug company based in Sydney. Knowledge of Collins’ holdings was already public, as the New York Times ran an article in January detailing Collins investments. According to the Times, the congressman “purchased shares of Innate four times in 2015 and 2016…totaling between $60,000 and $110,000.”

Collins’ chief of staff and Washington lobbyist Bill Paxon also bought shares in the company. Interestingly, the Center for Responsive Politics has no records of Innate moving money, but Paxon is a former congressman and a top-notch lobbyist with clients like the Pharmaceutical Research & Manufacturers of America and Philip Morris International.

The Daily Beast reported that “Collins wrote into a bill language to expedite the FDA’s approval process for drugs” similar to those sold by Innate Immunotherapeutics. “Four months before the bill was signed into law, Collins again purchased stock in Innate, this time as much as $1 million.” The bill referenced was the massive 21st Century Cures Act, which received bipartisan support and was passed in the final weeks of Obama’s presidency.

Technically, Collins didn’t break any laws when he made the massive purchase and authored the language. A loophole in the law dictates that elected officials only disclose their involvement in domestic initial public offerings. While Innate Immunotherapeutics is traded publicly in the United States, their stock still moves for less than a dollar.

Still, many view Collins’ huge buy-ins and work on the 21st Century Cures Act as an ethical red flag. As a former FEC lawyer told The Daily Beast:

“One could argue that not only should foreign IPOs not be exempt, but that they present an even greater possibility of a conflict of interest because they’re involved with foreign persons.”

A congressional insider described Collins as “kind of an oddball in the House,” noting that the New York lawmaker is “not well-liked, even among Republicans.” Collins’ financial moves could lead to an investigation by the House Ethics Committee.

Collins’ communications director said in a statement to The Daily Beast that “despite the continued partisan attacks insinuating otherwise, Congressman Collins has followed all ethical guidelines related to his personal finances during his time in the House and will continue to do so.”

Luckily for Collins, there are many provisions that could lead to him getting away with his hands clean. His language in the bill can be seen as having a broader effect on the pharmaceutical industries, and he could easily argue this was not targeted at his specific holdings. Also, Collins was involved with Innate Immunotherapeutics long before his work on the 21st Cures Bill. However, the congressman’s time of flying under the radar with his investments is now over.