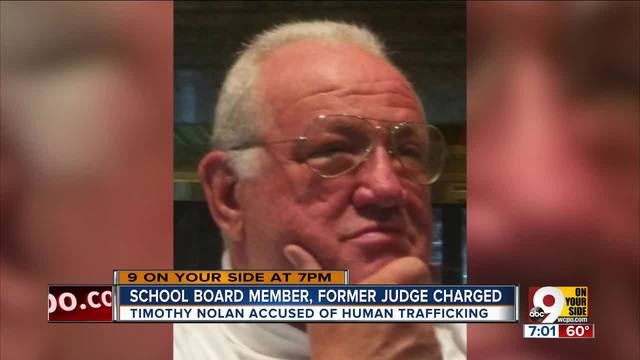 We are told pedophiles come in all bi-partisan varieties, including pillars of the community such as judges, police officers, teachers, and doctors.

The recent arrest of Tim Nolan, a 70-year-old former district judge and former chair of Trump’s campaign, is a case in point.

Scott Wartman reports for Cincinnati.com, April 21, 2017, that the arrest of former Kentucky Campbell County District Judge Tim Nolan on charges of human trafficking and unlawful transaction with a minor has shocked the community.

Nolan, 70, was a district judge in the 1970s and 1980s. He is outspoken in conservative politics and the tea party movement, and was elected to the Campbell County School Board last November. He was also the chairman of Donald Trump’s presidential campaign in Campbell County.

Court documents don’t give much detail about the incident or incidents that led to the charges. This much we do know, according to the criminal complaint:

The case presents a tricky situation for the legal community due to Nolan being a former Campbell County District Judge and his daughter, Taunya Nolan Jack, is the Campbell County Circuit Court Clerk.

To avoid conflicts of interests, a special judge from out of the area, District Court Judge Elizabeth Chandler from Carroll County, is presiding over the case and all court documents are being filed in Boone County. The attorney general’s office is prosecuting.

It is not clear what action the Campbell County School Board will take. Chairwoman Janis Winbigler referred all questions to the district office, saying, “We’re just learning about this. The board is immensely troubled by this.” Superintendent David Rust did not immediately return calls for comment.

The arrest has some veteran lawyers and judges scratching their heads. Retired family court judge Mickey Foellger who, as an attorney in the Campbell County attorney’s office, had worked with Nolan, said Nolan had a reputation as being a strict judge that “leaned to the tougher” side of sentencing. Foellger said, “I can’t imagine what he did. I don’t want to speculate. It’s mind-boggling that he would be with an underage girl.”

On April 21, Nolan was released on $50,000 bond and placed on an ankle monitor. He is scheduled for a preliminary hearing on May 5.