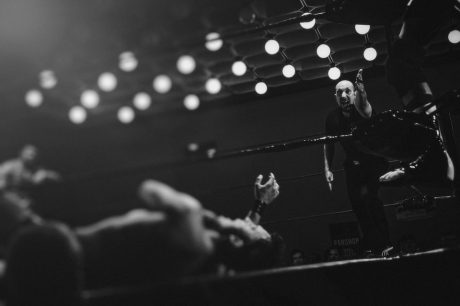 We have just witnessed one of the greatest routs in modern American political history.  We are still waiting to see if a spending agreement can be reached so that a government shutdown at midnight on Friday can be averted, but whether a shutdown actually happens or not, the Democrats have won this round by a landslide.  Even though the Republicans control the White House, the Senate and the House of Representatives, during these budget negotiations the Republicans have backed down on major issue after major issue.  The Democrats are acting like they own Washington D.C., and the Republicans are letting them get away with it.  For years Republican politicians have had a reputation for being gutless and spineless, but in 2017 they are taking their lack of courage to a whole new level.

Since a border wall was the number one issue that Donald Trump campaigned on, many had been anticipating that he would battle hard to get funding for it.  But instead he folded like a 20 dollar suit, and Senate Minority Leader Chuck Schumer has admitted to the press that he was anticipating that this might happen…

As for the broader funding standoff, “I thought one of two things. I thought he’d either back down. Or he’d do [a shutdown], and it would be a fight we’d win,” said Schumer. “When the president just puts together his own plan, which is almost always hard-right given who the people around him are, he has problems.”

And since the Republicans control the White House, the Senate and the House, many social conservatives believed that this would be the time when Planned Parenthood would finally be defunded.

But that is not going to happen either, and the truth is that the Republicans did not even put up a fight.

On Thursday, the Democrats decided to reach even further.  They warned that they would shut the government down if the Republicans brought a bill to replace Obamacare up for a vote by the end of this week, and within hours  the Republicans backed down…

Despite pressure from the White House, House GOP leaders determined Thursday night that they didn’t have the votes to pass a rewrite of the Affordable Care Act and would not seek to put their proposal on the floor on Friday.

Even though the Democrats have already gotten more than they could have ever dreamed possible, they are continuing to make more demands.

As we roll into Friday morning, the Democrats are warning that the government will shut down if the Republicans don’t agree to a bail out for Puerto Rico and billions of dollars of Obamacare subsidies.  An exasperated Trump fired off a tweet that clearly expressed his frustrations with these greedy Democrats…

The Democrats want to shut government if we don’t bail out Puerto Rico and give billions to their insurance companies for OCare failure. NO!

The Democrats are like a football team that is already up 70 to nothing and is still running a no-huddle offense because they want to score even more points.

At some point you have to understand that you have completely embarrassed the other side and that it is time to end things.

If anyone out there believes that I am overstating things, can they please explain to me what the Republicans are going to “win” in this budget deal?

There may be a limited bump in defense spending, but other than that I can’t really think of anything.

My hope is that someone in the Republican Party will eventually grow a spine.  Perhaps it will be Trump, and it was a promising sign when he told Reuters that he is not too concerned if a shutdown actually happens…

President Donald Trump downplayed the severity of a potential government shutdown on Thursday, just two days shy of a deadline for Congress to reach a spending deal to avert temporary layoffs of federal workers.

This is the kind of attitude that the Republicans needed to have weeks ago.

If the Democrats are going to be exceedingly greedy, the Republicans should simply let the government shut down.  The military and all “essential” operations would continue operating, and a lot of the “non-essential” operations that would temporarily close up shop would be stuff that we don’t actually need anyway.

So I don’t know why the Republicans are so fearful of a government shutdown.  Yes, the mainstream media would say that it is all their fault, but we are still well over a year away from the next elections.  If you were ever going to fight, now is the time to do it.  Instead of being so fearful of the mainstream media, our representatives in Washington should be concerned about what is good for the American people.

If the Republicans are always going to give the Democrats virtually whatever they want, why do we even have elections anyway?

We might as well just eliminate the Republican Party and go to a one party system like they have in China if Republicans are never going to actually ever do anything for us.

To me, it seems like the Democrats are almost secretly wishing for a government shutdown so that they can score some political points with the American public.  The Republicans should proudly stand united behind a bill that includes funding for a border wall, that defunds Planned Parenthood, and that completely eliminates all Obamacare subsidies and then let the Democrats force a shutdown by blocking it in the Senate.  At least that way the American people would be able to see that it is the Democrats that are to blame for any shutdown.

Instead, the Republicans have been groveling at the feet of the Democrats as if they are their masters, and it has been a horribly shameful display to watch.