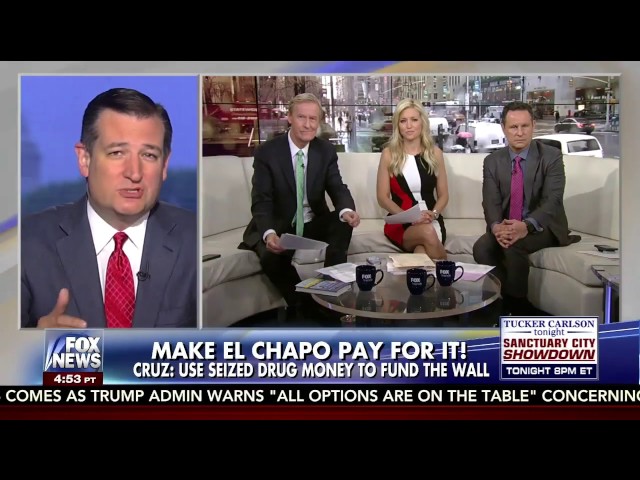 In a move that seems to be a stroke of genius, Senator Ted Cruz (R-TX) has introduced a bill that calls for the use of $14 billion that was seized from Mexican drug lord Joaquin “El Chapo” Guzman, who threatened Donald Trump in 2015, to be used to fund the southern border wall between the US and Mexico.

S. 939 is aptly cited as the Ensuring Lawful Collection of Hidden Assets to Provide Order Act or the EL CHAPO Act.

In a statement to Breitbart Texas, Cruz said, “Fourteen billion dollars will go a long way toward building a wall that will keep Americans safe and hinder the illegal flow of drugs, weapons, and individuals across our southern border. Ensuring the safety and security of Texans is one of my top priorities.”

“The Democrats are threatening government shutdown because they are so opposed to finally securing our border,” Sen. Cruz said. “So I have been trying to think about ‘how can we get this done?’ So yesterday I filed the EL CHAPO Act that provides that if El Chapo, the famed Mexican drug lord, is convicted, that his criminal assets go directly to building a wall and to securing the border and keeping our country safe.”

The bill states that the US government reserves any amounts forfeited “as a result of the criminal prosecution of Joaquin Archivaldo Guzman Loera (commonly known as El Chapo), or of other felony convictions involving the transportation of controlled substances into the United States, for security measures along the Southern border, including the completion of a border wall.”

“Notwithstanding any other provision of law, any illegally obtained profits resulting from any criminal drug trafficking enterprise led by Joaquin Archivaldo Guzman Loera (commonly known as El Chapo), which are criminally forfeited to the United States Government as a result of the conviction of Mr. Guzman Loera in Federal District court, shall be reserved for security measures along the border between the United States and Mexico, including the completion of a wall along such border, for the purpose of stemming the flow of illegal narcotics into the United States and furthering the Nation’s security,” the bill reads.

“Notwithstanding any other provision of law, any funds that are criminally forfeited to the United States Government as the result of a felony conviction in a Federal district court of a member of a drug cartel—an individual engaging in a continuing criminal enterprise involving knowingly and intentionally distributing a controlled substance, intending and knowing that such substance would be unlawfully imported into the United States from a place outside of the United States—shall be reserved for security measures along the border between the United States and Mexico, including the completion of a wall along such border, for the purpose of stemming the flow of illegal narcotics into the United States and furthering the Nation’s security,” the bill continues.

“There’s a justice,” Cruz suggested concerning using the money from the Mexican drug lord for a border wall.

“These drug cartels are the ones crossing the border with impunity, smuggling drugs, smuggling narcotics, engaged in human trafficking,” Cruz told Tucker Carlson. “They’re the ones violating our laws and it’s only fitting that their ill-gotten gains fund securing the border.”

“The U.S. Government is currently seeking the criminal forfeiture of more than $14 billion in drug proceeds and illicit profits from El Chapo, the former leader of the Sinaloa drug cartel who was recently extradited to the U.S. to face criminal prosecution for numerous alleged drug-related crimes, including conspiracy to commit murder and money laundering,” Cruz said.

“Now, it so happens, coincidentally, that the estimated cost of the wall is between $14-20 billion,” Cruz said, referencing the introduction of the bill on Monday.

Guzman was extradited by the Mexican government in January after Guzman had escaped multiple times from Mexican prisons. Prosecutors have filed murder charges against Guzman for the killings of two relatives and two US citizens, but he is not expected to receive the death penalty. So, no justice there.

Recall that Guzman was named as a beneficiary of the Obama-backed Operation Fast & Furious arms trafficking. We also know that in 2014, documents indicated that the DEA was involved with Guzman in trafficking cocaine under both President George W. Bush and Barack Hussein Obama Soetoro Soebarkah.

Guzman was known to have butchered his own people and targeted Christians, as well.