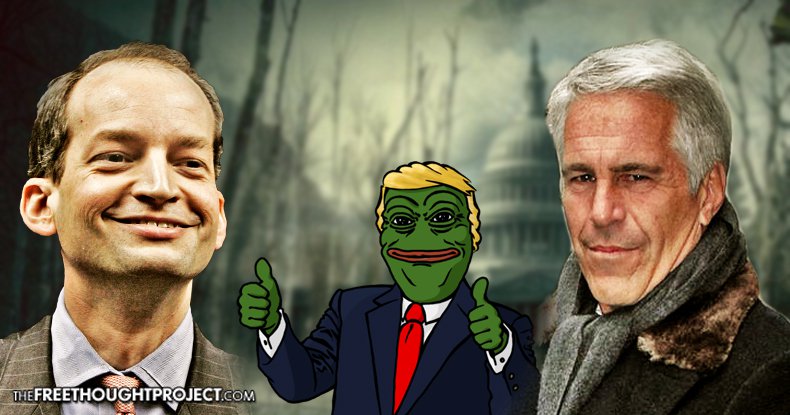 Labor Secretary Alexander Acosta, confirmed to the position Thursday by the U.S. Senate, is one in a string of disputed appointees to President Trump’s Cabinet, but this contention doesn’t concern his politics, rather, it’s centered on his lax treatment of billionaire pedophile, Jeffrey Epstein.

And former Green Party candidate and U.S. Representative, Cynthia McKinney, is none too pleased with the confirmation, tweeting shortly after the news,

McKinney had plenty of company in calling out Acosta’s appointment — weeks ago — but disputation over a shameful plea deal worked for Epstein’s benefit faded significantly from corporate media headlines in recent days.

Perhaps the lecherous and pedophilic behavior for which Epstein earned the consternation of millions once his sexual escapades with minor girls became public knowledge doesn’t so much bother American politicians, whose inappropriate lust was also exposed. Indeed, prior to taking the White House, billionaire Donald Trump dished out praise for Epstein back in 2002, telling New York Magazine for an article, in hindsight, peculiarly titled, “Jeffrey Epstein: International Moneyman of Mystery,”

“I’ve known Jeff for 15 years. Terrific guy. He’s a lot of fun to be with. It is even said that he likes beautiful women as much as I do, and many of them are on the younger side. No doubt about it — Jeffrey enjoys his social life.”

“A Florida mother first brought billionaire Jeffrey Epstein’s peculiar caprices to the attention of Palm Beach police in 2005 when she reported that her teenage daughter had been given $300 at an Epstein party to strip to her underwear and massage the mogul. Eventually, federal investigators and prosecutors built a case against Epstein (who started out as a teacher of seventh graders at a New York private school before striking it rich in finance) that involved 17 witnesses and five other underaged women.”

Further, the Post continued, “Although Epstein’s friends and visitors once included past and future presidents, rock stars, and some of the country’s richest men, he is no longer a social magnet. Epstein pleaded guilty to a Florida state charge of felony solicitation of underage girls in 2008 and served a 13-month jail sentence. Politicians who had accepted his donations, including former New Mexico governor Bill Richardson and former New York governor Eliot Spitzer, have scurried to give them back. (Harvard University kept a $6.5 million gift, saying it was ‘funding important research’ in mathematics.)”

To say the notorious money-mover and entertainer of the world’s elite liked ‘women’ on ‘the younger side’ utterly dismisses the extent of debauchery which took place at Epstein’s southern Florida home and private access Caribbean island, as noted by staff of a U.S. Attorney ten years ago — before that attorney arranged a deal over which criminals of every stripe would drool.

In his tenure as that attorney based in Miami, Acosta bucked recommendations to federally indict Epstein — despite that the now-64-year-old sexually abused no less than 40 girls, most of them aged between 13 and 17 years.

Epstein — had it not been for suspicious wrangling by Trump’s only Latino Cabinet pick — might have been sentenced to life behind bars.

Prosecutors from Acosta’s office, working with the FBI and documented for the court, found that, through assistance from several female assistants, Epstein “would recruit underage females to travel to his home in Palm Beach to engage in lewd conduct in exchange for money … Some went there as much as 100 times or more. Some of the women’s conduct was limited to performing a topless or nude massage while Mr. Epstein masturbated himself. For other women, the conduct escalated to full sexual intercourse.”

Rather than the minimum ten-year sentence the billionaire pedophile faced, attorneys and police were shocked when Acosta’s arrangement with Epstein’s lawyers landed a part-time, eight hours per day county jail term — in essence, downplaying the criminal severity inherent in allegedly having sex with children just beginning to experience the pangs of puberty.

“Acosta also deviated from legal norms when he granted the deal without first notifying the young women who had spoken to investigators about their experiences with the billionaire,” Newsweek reported. “Details of the deal were not made public until a federal judge unsealed it as part of a civil lawsuit brought by four women in 2015.”

Epstein served a mere 13 months total for his crimes.

Acosta’s apparent indiscretion on serious matters wasn’t held to pooh-poohing the gravity of sexual abuse of minors — the New York Times noted Thursday a 2008 investigation by the Department of Justice faulted Acosta for violating federal law and departmental policy for consideration of political affiliation during hiring while heading the DOJ’s civil rights division, which stacked the deck with allies of then-President George W. Bush.

On the non-political but legally tangible criminal activities of which Epstein and his ilk seemed so fond, Acosta’s ‘sweetheart deal’ sent a resounding message the caprices of the elite trumps holding the wealthy accountable for even the most pernicious of wrongs — hardly the paragon of integrity befitting an appropriate leader, much less a U.S. Secretary of Labor.

Despite a tepid backtracking in 2011, via a letter posted online to the Daily Beast, Acosta’s tone intimated the desire to disregard past errors possibly made in the handling of Epstein’s case.

“Some may feel that the prosecution should have been tougher,” he wrote. “Evidence that has come to light since 2007 may encourage that view. Many victims have since spoken out, filing detailed statements in civil cases seeking damages. Physical evidence has since been discovered. Had these additional statements and evidence been known, the outcome may have been different. But they were not known to us at the time.”

With Epstein walking free about his home in the U.S.-controlled Virgin Islands, not having had to experience years or life inside a steel cage, revelations of his behavior occasionally seep into the harsh eye of public purview.

In a 2014 court filing, an unidentified woman accused the money manager of holding her hostage as a “sex slave” — Epstein had forced the young girl to have sex with Prince Andrew — a claim vociferously denied by Buckingham Palace.

Epstein’s lewd wrongdoings cannot be misapplied to the latest Trump appointee, but Acosta must bear the burden in tacitly dismissing the pain, anguish, and trauma experienced by the billionaire’s victims — since he, alone, prevented a punishment congruent with the criminality of acted-upon pedophilic desires.

For a strong advocate and champion of the people like Cynthia McKinney, however, the two should be inextricably linked, never forgotten, and the one responsible for letting the other slide should never have been rewarded with a prestigious and powerful position — one which traumatized victims will feel a constant reminder their pain didn’t so much present a stumbling block for its achievement.