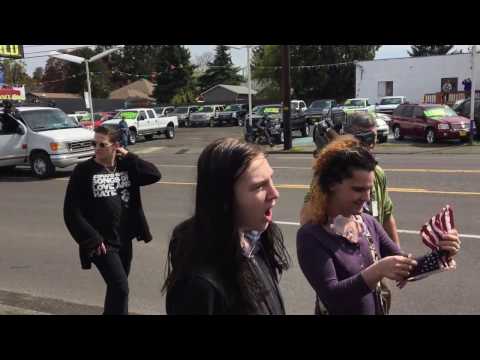 PORTLAND, OR (INTELLIHUB) — The George Soros-funded anti-fascist group known as ANTIFA has been taking to the streets en masse recently in an attempt to cause even more confusion and chaos than there already is in America.

However, it didn’t work out too well for one transgender ANTIFA protester who lit a small American flag on fire while walking down the sidewalk in protest.

Just after the transgender person with a beard who others on scene identified as a ‘woman’ lit the flag on fire a biker Trump supporter snatched it from “her” out of nowhere.

“Hey, you a fu**ing stealing my property,” the alleged woman said after the big biker grabbed it.

“That’s her property,” another ANTIFA protester’s voice could be heard saying.

An ANTIFA protester then spoke up in defense and said: “It’s a ‘her’ you transphobic piece of shit.”