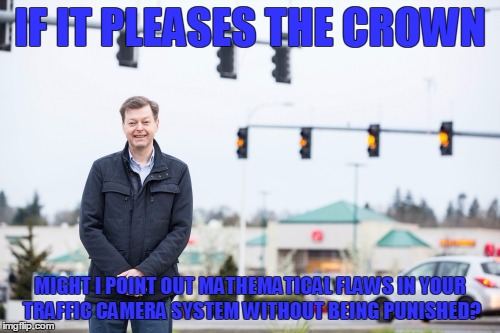 Mats Järlström noticed a flaw in the mathematical formula used to regulate the timing of traffic lights.

His interest was sparked back in 2013, after his wife received a red light camera ticket after driving through the intersection of Allen Boulevard and Lombard Avenue in Beaverton, Oregon. Mats explored how yellow lights are timed. He began writing and speaking publicly about how red light cameras misuse the standard mathematical formula for timing traffic lights, which leads to unsafe driving conditions and unfair tickets when drivers slow down to turn.

People wanted to hear Mats’ ideas. Local news outlets covered his story, and he shared his research at a national conference of the Institute of Transportation Engineers.

Mats observed a problem – one that was costing drivers a bundle (his wife was fined $260 for her ticket) and set out to fix it.

Trying to improve driving conditions – while saving drivers money – is something most reasonable people would find honorable.

People, excepting the “authorities” in Oregon – who did not appreciate Mats’s ideas at all.

The problem of traffic light cameras being flawed (in favor of the State, of course) is not new. According to DrivingLaws.org: “In some cases, it has been discovered that municipalities have deliberately shortened the duration of yellow lights in order to increase the odds of running the light (and ratcheting up the town’s traffic enforcement revenue).”

Back in 2014, a local news article referred to Beaverton as “TicketTown”, calling police in the area “ticket-writing royalty, the kings and queens of pulling drivers over in the area”.

Red light cameras are often installed under the guise of reducing accidents, but they have actually turned into quite the cash cow not only for cities, but for the corporations that supply the cameras. As Jeff Zurschmeide explained in Red-Light Cameras Are Producing Profits More Than Protecting Drivers:

One proven way to reduce accidents and improve red-light compliance is to actuate the yellow light sooner and leave it on a little longer. Drivers have more time to notice and react to the yellow light, and most will stop for it. This is not news. The U.S. Department of Transportation (DOT) has been recommending this technique for decades.

However, if you’re thinking that cities with red-light camera contracts have followed the DOT’s guidelines to reduce accidents and increase compliance, think again. The contracts in place with red-light camera providers often specify maximum yellow light times, and impose financial penalties if the city lengthens the yellow period.

In fact, a 2001 report issued by the Office of the Majority Leader in the United States House of Representatives showed that the typical yellow light time had been reduced by about 25 percent compared to the times prevailing in the mid-1970s.

Naturally, someone had to try to silence Mats and stop him from exposing and interfering with the city’s revenue-generating racket.

Mats has filed a lawsuit against the board, with the help of the Institute for Justice, a nonprofit law firm that “litigates to limit the size and scope of government power and to ensure that all Americans have the right to control their own destinies as free and responsible members of society.”

The lawsuit challenges the constitutionality of the state’s requirement that citizens must obtain an engineering license in order to publicly debate anything involving “engineering.”

His story has gotten quite a bit of coverage, including this local news feature:

Sam Gedge, an attorney at the Institute for Justice, said of the case:

“People should be free to debate any topic, including technical topics like math and traffic lights. But I was fined simply for speaking out and was told that I can’t truthfully call myself an engineer. The board has not only silenced me, it has silenced many other people who want to talk about technical issues.”

If you are aware of how pervasive the police state is – how deeply entrenched it is, even at local levels – then this story may not surprise you very much.

And, you may not be surprised to hear that states don’t want anyone interfering with one of their prime revenue-collecting schemes.

But Mats’ case adds to a growing body of evidence that government’s attempts to suppress free speech (and silence those who attempt to expose corruption) are growing dangerously out of control by the day.