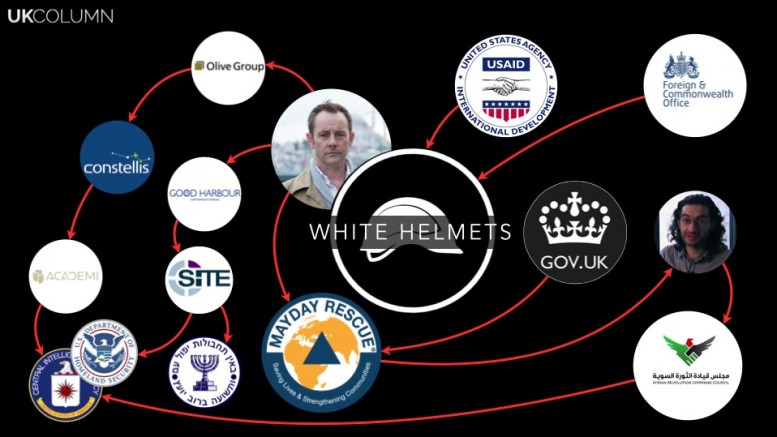 Unlike journalists associated with the Western corporate media, Vanessa Beeley has been reporting from inside Syria on and off since early 2016. In many cases, while the Western corporate press was reporting in the most authoritative manner about the alleged “crimes against humanity” committed by the Syrian government in Aleppo despite having no one on the ground in those areas, Beeley was indeed present and able to directly contradict the lies spread by the corporate press with her own firsthand accounts.

Likewise, Beeley has led the charge against the ridiculous propaganda outfit known as the White Helmets, a terrorist support group that has been used by Western governments to lure well-meaning millennials into supporting al-Qaeda against the secular government of Bashar al-Assad.

It is well-known to anyone who spends even the smallest amount of time researching the Syrian conflict that the United States and Britain have been providing support to not only the White Helmets but also to terrorist groups such as al-Nusra, ISIS, and al-Qaeda among others. Indeed, ample evidence shows that the White Helmets are nothing more than a support group for al-Nusra, essentially acting as a propaganda wing of the organization. In other words, it is evident enough to anyone who exams the situation closely that the White Helmets and Nusra are the same organization.

Vanessa Beeley has now provided one more bit of evidence in this regard after a visit to the M10 hospital in Sakhour, East Aleppo, an area which had long been an al-Nusra Front stronghold and acted essentially as a compound and headquarters for the terrorist group’s operations in the area. After the liberation of East Aleppo, Beeley and a handful of independent journalists were able to travel to Sakhour and the M10 to investigate the aftermath of the battle. What they found was yet more evidence that the West’s precious White Helmets are nothing more than al-Nusra’s propaganda wing, as both Vanessa Beeley and I have documented repeatedly in the past.

Notably, these ambulances were clearly donated to the White Helmets/Nusra team by Western countries as one can see in the pictures. In addition, another healthy dose of supplies have come from Western countries, as is evidence by the English writing on the labels. The supplies originated from German healthcare company, Fresenius, a corporation that does a great deal of business in the United States. However, supplies are provided to the White Helmets by the United States, Britain, EU, Qatar, Japan, and Norway, not necessarily by specific corporations.In this compound, which is supposed to have housed only al-Nusra, one can clearly see White Helmets supplies, uniforms, and other stage props, including ambulances. In other words, the al-Nusra compound and the White Helmets compound were one and the same.

So while England’s Donald Trump, Boris Johnson, readies for war against the Syrian government, one question he should be answering is why English ambulances and English medical supplies continually end up sitting in al-Qaeda compounds in Syria?

Vanessa Beeley’s pictures, posted below, show the Western ambulances belonging to the White Helmets and their proximity to the Nusra/al-Qaeda compound. However, Beeley’s videos taken from the scene are what truly show the scale to which Nusra and the White Helmets function as the same organization, with one being the military wing and the other being the propaganda outfit.

As Beeley herself wrote,

Walking inside the Nusra Front HQ in Sakhour East Aleppo. From the top floor window you can see into the adjacent White Helmet centre. Both buildings were school buildings converted into arms and equipment stores for the extremist factions who held East Aleppo prisoner for almost five years. Littered around all buildings was proof of equipment supply from U.K., U.S. and EU states, Japan, Norway, Qatar, Saudi Arabia, and Turkey. The White Helmet centre was connected to the Nusra Front buildings and graffiti and logos clearly demonstrated the White Helmets affiliation with al-Qaeda.

The White Helmets have long been exposed for being nothing more than al-Qaeda’s propaganda outfit, most recently having signed a document as a statement of solidarity with al-Qaeda fighters in Barada, Damascus, threatening to withhold drinking water from Syrian civilians unless the Syrian military ending all military operations there.