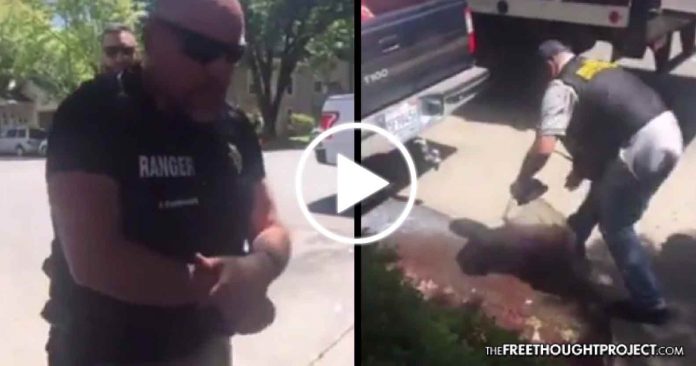 Government agents have again let their true colors shine, in a latest attempt to fight one of the most pernicious and brutal crimes embattling far too many communities across the nation — a lack of permit.

Never fear, code enforcers raided street food vendors outside Sacramento’s Southside Park, where they have long made food and beverages available to the public and attendees of Our Lady of Guadalupe Church each Sunday.

These fearless agents of the State, peace officers, not only seized the food supposedly so in need of a permit, they dumped punch into storm drains and confiscated coolers, tables, chairs, canned soda, and literally everything in the vendors’ possession — the entire raid, captured on Facebook Live video.

In video footage, one peace officer says, “I came and I personally talked to each of them months ago. And I told them, ‘If you don’t comply, if you don’t get a permit, you’re going to be in violation, they’re going to confiscate your product.’”

What the agent fails to make clear on tape is that most of the vendors present had, indeed, applied for permits prior to this raid — but the permits had yet to be approved. In short, the officers previously warned permits would be necessary — but they did not allow sufficient time for governmental permission slips to be granted before carrying through on threats to shut them down.

One woman pleaded with these officers of the peace not to take from under her the cooler filled with water and cans of pop she explained her family so desperately needed — but a female cop would not listen to reason. Eventually, the forlorn woman had no choice but to relent and allow the beverages and cooler to be seized.

“Look at what they’re doing,” Desiree Rojas, of the Labor Council for Latin American Advancement, can be heard narrating on video footage of the raid.

Rojas believes the obstreperous raid might have had more to do with the vendors’ nationalities — most speak Spanish and are Mexican — than with their lack of permits.

“It was embarrassing and humiliating,” she told local FOX40. “And I don’t think that the Mexican community deserves to be treated that way.”

But what Rojas added next speaks to the oppressive national political climate — and the fears so innately present in the minds of those food vendors and their clientele as to be inextricable from their utterly victimless crimes.

“We thought it was ICE.”

These otherwise law-abiding street vendors — most still waiting for the appropriate pieces of paper for which they applied — now must scramble to supplant the income that will be lost without the equipment necessary to run their businesses.

Without the coolers to keep beverages appropriately chilled or warmed, or the tables and chairs they provided for churchgoers to congregate over a meal, the vendors fear for their welfare and that they might have attracted the attention of immigration officials — if unnecessarily so.

Rojas emphasized most of these Sunday morning vendors would very much like to work within the confines of the law — whether that be through permitting or any other restrictions the State would impose — but had not been given sufficient time since being threatened with shutdown for permit applications to be granted.

Ironically-monikered peace officers claimed without elaborating or providing specific details on the video they’d received complaints — but the outpouring of support from the public and church communities, as well as outrage over the raid, did not evince any complainants relieved to see the picnicking quashed.

Rojas and members of the Labor Council for Latin American Advancement will discuss the raid, its repercussions, and their concerns for the community stemming from the actions taken by police on Sunday.

Obtaining a permit — which, for all intents and purposes, amounts to a permission slip from the State — can be a fraught and unnecessarily arduous procedure, depending on one’s location in the U.S. and the subject matter in question.

Frequently, the State offers no leniency in the matter, making the process of getting a permit a patience-testing exercise at best — add extenuating circumstances, and obtaining a permit becomes a Herculean task.

For instance, last August, Louisiana experienced torrential downpours and widespread flooding so damaging, scores of home- and business owners had no choice but to rebuild from scratch. That seemingly simple solution — starting over — soon turned into laborious hoop-jumping in order to satisfy permitting requirements the State had previously imposed.

No latitude was offered flood victims when it came time for construction to begin — permits, the State essentially demanded, are permits — even if high water left victims without shelter. As Baton Rouge building official Justin Dupuy noted at the time,

“We haven’t suspended any of our requirements for permitting.”

Then, in September, another prime example of the absurd intersection between logic and the overcriminalization of daily life reared its head, when a little girl did what little girls have done throughout time immemorial — she set up a lemonade stand.

At the height of Pokemon Go hysteria, several local governments even sought to force permitting restrictions on players.

From diligent street vendors offering tasty bites to kids’ offering family-recipe lemonade to parched passersby, one thing has been made abundantly clear — permitting is out of control.

Permits are the government’s way of bilking people of money under the petulant guise of public safety — but the truth about permitting is much simpler and infinitely less benign.

‘You aren’t allowed to profit unless I get my cut,’ is what the State really says when Mexican food vendors, flood victims, little girls, and countless others receive fines and tickets — or have their possessions confiscated — due only to lack of permit.

That the Sacramento food vendors didn’t shirk legal responsibilities and had applied for the necessary permits when cops seized their wares again proves the issue has little to do with the permit, itself, and everything to do with an unreasonable government running roughshod on all of us.

If you still aren’t convinced, just ask the guy who volunteered free hugs to subway riders in November — for which the State slapped him with a $101 ticket.