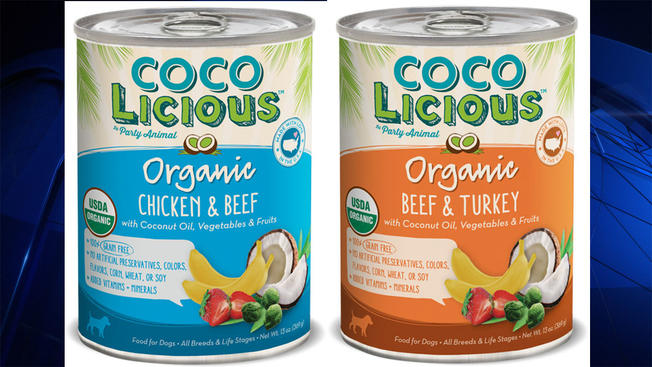 From WebMD (4/28/17): “Party Animal is recalling dog food that tested positive for a pet euthanasia drug…The voluntary recall affects the company’s Cocolicious dog food brand…The affected products include 13-ounce cans of Cocolicious Beef & Turkey dog food (Lot #0136E15204 04, best by July 2019) and 13-ounce cans of Cocolicious Chicken & Beef dog food (Lot #0134E15 237 13, best by August 2019)… Party Animal is working with distributors and retailers to find out if any other beef-flavored foods are still being sold, and if so, to recall them immediately, the company said.”

KDVR (FOX) reports: “Party Animal is recalling two lots of its Cocolicious dog food because it might contain pentobarbital.”

CNN: “Party Animals, a California-based pet food maker, is recalling two lots from its line of Cocolicious dog foods after some cans in Texas tested positive for pentobarbital — a chemical that’s used to euthanize animals. In a statement on its website, Party Animal said a customer in Texas had given Cocolicious samples to a lab and the dog food tested positive for pentobarbital. Party Animal is asking for those test results, and ‘out of an abundance of caution’ is recalling the two lots of dog food sold nationwide. The company is also sending cans of its dog foods to an independent lab for testing.”

How would this drug, used to euthanize animals, find its way into pet food? The suggestion is: the pet food contains meat from previously euthanized animals (not cows).

Concerning a previous recall by another company, Evanger’s, the Detroit Free Press stated: “In researching the supply chain, Evanger’s learned that ‘pentobarbital is very highly controlled, and that, if an animal is euthanized, it is done so by a veterinarian. Once this process has been done, there is absolutely no regulation that requires the certified vet to place any kind of marker on the animal indicating that it has been euthanized and guaranteeing that product from euthanized animals cannot enter the food chain’.”

If this is true, we would be talking about euthanized dogs and cats somehow entering the pet-food manufacturing process—and pet dogs would end up eating dog and cat meat.

Veterinarians are selling euthanized animals to middle men, who in turn supply meat to pet-food manufacturers?

There is another possibility. The American Society for the Prevention of Cruelty to Animals (ASPCA) states, on its website: “Approximately 6.5 million companion animals enter U.S. animal shelters nationwide every year… Each year, approximately 1.5 million shelter animals are euthanized (670,000 dogs and 860,000 cats).” Are shelters selling the euthanized animals? Do a few (or more than a few) animals end up in pet food?

Knoji.com states: “Cremation allows for the shelter to burn the bodies of pets. However, not all animal shelters can afford this so many send the bagged bodies of animals to a special part of the city landfill (garbage dump). The third option is not as common as it use[d] to be, and generally not done in the charity run shelters, but more common in city run ‘pounds’ – this is when the bodies are sold to research labs, dissection supply companies, or rendering facilities where they may actually be rendered down and put into pet food.”

“It might surprise some dog owners to know that dog meat has been used in dog food. This practice was relatively common until the late 1990’s. Even today there are no laws preventing man’s best friend from ending up in dog food.”

“Please note the below information on dead dogs being used in dog food is true to the United States but may also occur in Canada and possibly other countries.”

“At some time or another pet food companies realized there was a cheap source of meat available… Dog Meat, and it could be purchased cheaply from animal shelters and the dog pound. These were places where dogs were euthanized weekly and there was always a need to dispose of the bodies. Nobody said anything and there were no laws preventing such from happening.”

“However what started to tip the scales was that the veterinarians who performed the euthanasias at the animal shelters started noticing it was taking more and more drugs to put these animals to sleep. They realized that somehow pets in animal shelters were building up an immunity to the medications used to end their lives. Typically veterinarians are called to shelters every week to euthanize between 10 and 200 animals (or more in larger centers) so this was where they saw the problems develop quite easily.”

“As such several investigations were launched to see how pets were building up immunities to the drugs. The FDA (Food and Drug Administration) launched an investigation. They found that sodium pentobarbital (the drug often used to euthanize pets) passed through the rendering process and ended up in pet food. They admitted finding the drug in some pet foods and stated ‘several retail feeds were confirmed for the presence of phentobarbital which could only have come from euthanized animals.’ Most of these investigations were exposed by television news groups such as Seattle’s King 5, and KMOV in St. Louis, Missouri.”

“What they exposed was something that many people already knew – dead dogs were being used to make dog food. Many animal shelters are government run. These poorly funded shelters found a way of generating extra income and disposing of the animal bodies all at once—Sell them cheaply to a [pet food] rendering plant. You will note your local SPCA probably does not do this.”

This account suggests that the FDA already knows dog meat in dog food is an ongoing problem, and the FDA also knows that euthanized dogs, whose bodies contain the euthanasia drug, are used for dog food. This is not a new discovery or a puzzling problem.

If the FDA is scratching its collective head and trying to solve a mystery, that would be a pose.

It would be like saying, on a human level, “Well, we know several companies have been polluting the water and soil of a town for years, and the chemicals are exceedingly toxic and dangerous, but we’re not sure where the cancer clusters are coming from. Much more investigation is needed.”

It appears we’re looking at a situation where all the parties—government animal shelters, veterinarians, pet food rendering plants, pet food companies, and the FDA—know exactly what’s going on…and say nothing, or pretend surprise when a new case of dogs eating drug-poisoned dog meat shows up.

The FDA is famous for ignoring their own responsibility, when a medical drug they’ve approved, as safe and effective, starts killing people.

I wonder how many humans, living on the extreme margins, eating pet food, have succumbed…