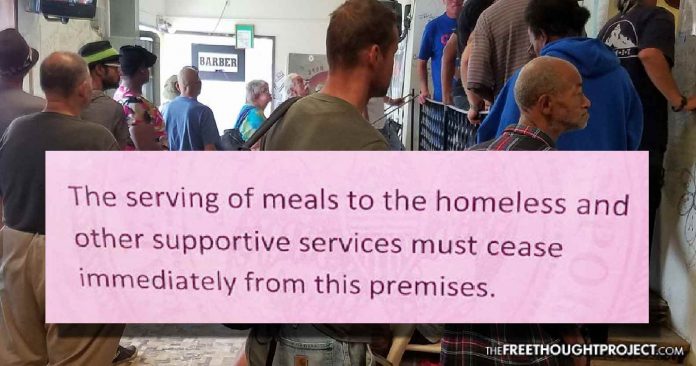 Davenport, IA — A church in Davenport, Iowa, facing zoning restrictions related to its outreach program to feed the homeless, is appealing its local council and questioning the legality of the city’s regulations. This all stems from a cease and desist order they received — because feeding the homeless is not allowed when you’re zoned as a church.

Pastor Jim Swope founded Timothy’s House of Hope in 2009 and is associated with Compassion Church, which was founded by Pastor Nick Cantwell. One of the primary missions of the church is focused on outreach to poor and homeless individuals, offering addiction resources, haircuts, a food pantry, clothing, and meals at no charge, according to the ministry’s website. Timothy’s House of Hope center has estimated thousands of meals served each month.

Timothy’s House of Hope recently moved its operation from West 4th Street to Washington Street, which is where the Compassion Church is located. The center’s location change resulted in its closure just days later due to what has been described as “zoning issues.”

While the House of Hope was allowed to serve meals at the 4th Street location, their move to Washington Street is reportedly in violation of zoning ordinances. The church is permitted to operate on Washington Street, but “services to the homeless” are prohibited due to zoning regulations, according to the Quad-City Times.

Bruce Berger, Davenport’s economic development and planning director, said that the property must first be classified as a “Planned Institutional District” specified for “Housing and Supporting Services.”

The city appears to have taken a general position of seeking to abide by zoning regulations. Davenport Mayor Frank Klipsch told WQAD News 8 that “We can’t let this be interpreted in any way that we do not support the great work that timothy house of hope is doing,” and has said that the city is reaching out to the city attorney to check the possibility of re-opening as the zoning issues are addressed.

In the meantime, however, to hell with the homeless people who need the food. They can starve whilst the church files the proper paperwork and red tape to help people.

In addition to the zoning issues, Swope has claimed that Davenport Alderman Ray Ambrose is specifically opposed to the notion of a homeless outreach center operating on Washington Street. According to Swope, Ambrose confronted him and “just lit into me and said he didn’t want bums on top of the hill” following the center’s relocation.

The Quad City Times reported that Ambrose acknowledged that he doesn’t view the center as a good fit for the area, which is a business district that he described as “most iconic.”

“It’s a huge issue with me and I’ll fight it to the very end,” Ambrose was quoted as saying. “I don’t have a warm and fuzzy feeling for the homeless as other people do.”

According to Radio Iowa, Ambrose “says the church lied about its plans and that a homeless outreach center does not fit into his vision for the district.”

A group of community members spoke out at a city council meeting on April 26 urging the city to allow the center to reinstate operations. Mike Meloy, an attorney working with the Compassion Church, argued that the “city of Davenport’s actions violate Pastor (Jim) Swope and Pastor (Nick) Cantwell’s religious freedom of association and religious rights protected by the First Amendment of the United States Constitution (and) Article 1 section 3 of the Iowa Constitution.”

Drew Klein, state director for Americans for Prosperity-Iowa, shared his thoughts on the controversy. “It is truly appalling that city officials are citing long ignored zoning regulations to shut down a ministry that has done nothing but serve underprivileged members of the Davenport community,” Klein noted.

Klein was among other individuals at the meeting who called out Ambrose’s comments about the homeless and said that “Alderman Ray Ambrose’s words on this issue have been particularly distasteful, referring to members of the homeless community as bums and claiming he does not share his community’s sympathy for these individuals.”

“Shuttering a ministry that is doing incredible work in the community is probably not what their voters had in mind,” Klein added.

Klipsch reiterated that the city was hoping to work with the Compassion Church and Timothy’s House of Hope to reach a solution and that the issue was presented to the city as a zoning problem, not an act of opposing the work of the church.