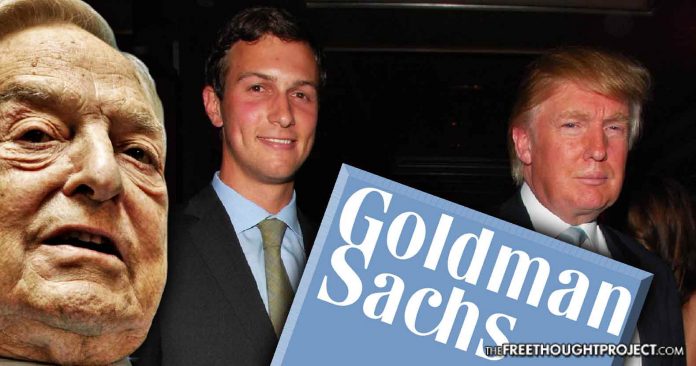 “Mr. Kushner’s stake in Cadre—a tech startup that pairs investors with big real-estate projects—means the senior White House official is currently a business partner of Goldman Sachs Group Inc. and billionaires including George Soros and Peter Thiel, according to people close to the company.

“The Cadre stake is one of many interests—and ties to large financial institutions—that Mr. Kushner didn’t identify on his disclosure form, according to a Wall Street Journal review of securities and other filings. Others include loans totaling at least $1 billion, from more than 20 lenders, to properties and companies part-owned by Mr. Kushner, the Journal found. He has also provided personal guarantees on more than $300 million of the debt, according to the analysis.”

To hold a position of power as high up in the Trump White House as Kushner, such connections and associations must be reviewed by ethics officials for potential conflicts of interest — in particular, to ensure political decisions will not serve either the adviser or his father-in-law.

According to one of his attorneys, Jamie Gorelick, Kushner owns a company called BFPS Ventures LLC — the parent or umbrella over Cadre — but the latter and ostensively more disputatious startup is not reported anywhere in the adviser’s mandatory financial disclosure forms.

Gorelick assured the WSJ the real-estate firm, Cadre, is indeed mentioned in a revised financial disclosure form, but that cannot be released to the public prior to analysis by ethics officials.

Further, none of Kushner’s whopping $1 billion debt total had been fleshed out in those disclosures.

Despite the astronomical I.O.U. tallies and potentially explosive ties to the billionaire contentious provocateur, Soros — who, incidentally, provided Kushner a $250 million line of credit — Gorelick insisted any revision to a financial disclosure form is considered “very normal,” since attorneys, not Kushner, prepared the information.

She added Trump’s son-in-law had indeed previously discussed the newly revealed information with the Office of Government Ethics and he has already “resigned from Cadre’s board, assigned his voting rights, and reduced his ownership share.”

Thus far, the Office of Government Ethics has not responded to the Journal’s request for comment on the matter.

Former Federal Election Commission chair, Trevor Potter, aligned with other ethics experts in noting the business ties through Cadre and related debts must ordinarily be disclosed — but stopped short of calling the failure to publicly disclose the information a substantive violation of rules.

However, business connections and related debts, they said, must be disclosed to officials so that Kushner would be forced to recuse himself upon any future conflicts of interest where investors and businesses could stand to gain from such a high-level association and vice versa.

“Mr. Kushner,” the WSJ continues, “the 36-year-old scion of a real-estate family, agreed with federal ethics officials to divest more than 80 assets after he and his wife Ivanka were hired by her father, President Donald Trump, to be senior aides. White House officials have said some of the sales were needed to avoid potential conflicts between Mr. Kushner’s far-reaching job duties and his personal financial interests.”

All told, Trump’s adviser retained some 200 assets worth $116 million, largely in properties throughout the United States — but has refused to place those assets into a blind trust, as called for by ethics experts.

Kushner cofounded Cadre in 2014 with his brother, Joshua, and a longtime friend and business partner, Ryan Williams — and substantial assistance from a number of high-powered Goldman Sachs investors, including Thiel.

Cadre then garnered a $250 million line of credit from billionaire George Soros, who — known in the U.S. primarily for financial and political support of the Democrat Party, and thus also a general adversary of Republicans — also reportedly invested heavily in the company in 2015, prior to Trump’s bid for the presidency was announced.

The Journal also notes that, although Kushner putatively stepped back from positions of authority in Cadre, as owner, he retains the power to “influence the [firm’s] management or policies,” as stated in public information from the Financial Industry Regulatory Authority.

Chief Executive Williams asserted Cadre has cooperated with regulators in updating disclosures to “reflect Jared’s non-operational, non-management relationship with the company, which has been in place since the inauguration.”

“BFPS Ventures, the company that Mr. Kushner’s lawyer says holds his Cadre stake, is shown on his financial disclosure form as owning unspecified New York real estate valued at more than $50 million. The form adds that ‘the conflicting assets of this interest have been divested,’” the Wall Street Journal explains.

An analysis by the outlet found Kushner’s assets could be easily tied to multiple U.S. and foreign Big Banks, private equity firms, and government-owned lenders.

And lenders to Kushner — allocated for real estate or to him, directly — the Journal found, “include Bank of America Corp. , Blackstone Group LP, Citigroup Inc., UBS Group AG, Deutsche Bank AG and Royal Bank of Scotland Group PLC. Royal Bank of Scotland didn’t immediately respond to requests for comment; representatives of the other firms declined to comment.”

While a number of investors and associates of Kushner’s declined to comment on these revelations, those who did, dismissed the news as typical and unconcerning to the public.

“Anything that presents a potential for the conflict of interest should be disclosed so that the public and the press can monitor this,” Potter told the Journal, while downplaying the severity of previously undisclosed information.

Unnamed sources told the Journal Kushner would indeed recuse himself in matters pertaining to Deutsche Bank or RBS, to which he provided personal guarantees on loaned funds.

However, Kushner’s legerdemain in failing to disclose debts to Bank of America, Blackstone Group, Citigroup, UBS, Deutsche Bank, and RBS, until now, should not exactly instill confidence in any declarations of transparency on financial matters.