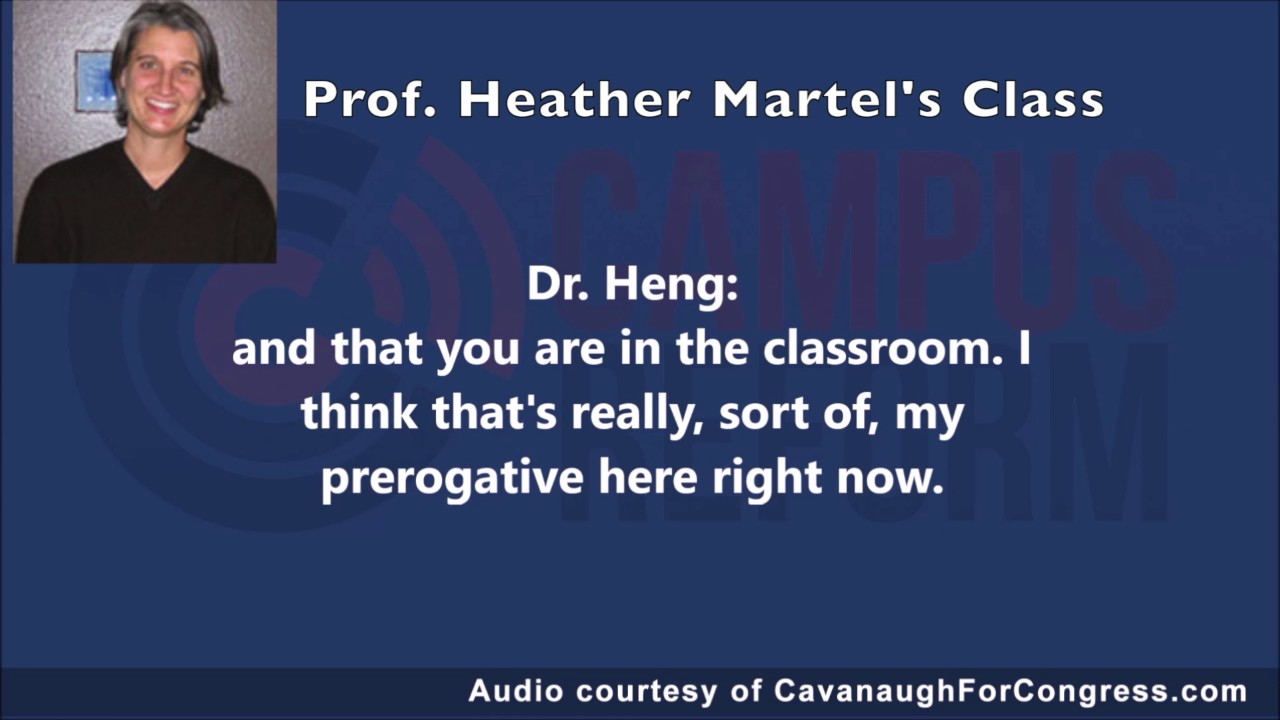 Holden is a Christian.

In February, Holden arrived early to a U.S. history class with at least five minutes to spare. So he took out his Bible to read, but was ordered by the instructor, Assistant Professor Heather Martel, to stop reading the Bible because she didn’t want him to “sit in front of her” with his Bible out.

Note: Dr. Heather Martel is an Assistant Professor of History (which means she likely is untenured) and an Associate Faculty of Women’s and Gender Studies at Northern Arizona University (NAU). She claims U.S./gender history as her specialty.

Holden refused. Martel reported him to her department chair Dr. Derek Heng. Holden was called into Heng’s office. Below is an audio recording of Holden’s meeting with Heng, provided to Campus Reform by Kevin Cavanaugh for Congress.

Here’s a transcript of the audio recording:

Dr. Heng: “So, I mean, so Prof. Martel says that she doesn’t want you sitting in front of her because you put, you know, a Bible out, right?”

Heng: “So, um, I don’t know what dynamics is going on in the classroom. Um, I mean the real key, uh, is to make sure that, you know, the class is able to go on and that you are in the classroom. I think that’s really, sort of, my prerogative here right now.”

Holden: “So she doesn’t want me front because I have my Bible out.”

Holden: “I mean, class isn’t even started yet. I’m reading my Bible.”

Holden: “Ya, not for another five minutes.”

In other words, although the student Mark Holden HAD DONE NOTHING WRONG, simply because Professor Heather Martel was bothered by seeing Holden reading the Bible, History Department Chair Professor Derek Heng asks the student to put his Bible away.

Anthony Gockowski reports for Campus Reform, April 27, 2017, that prior to the Bible incident in February, Martel had accused Holden of violating the university’s policy on disruptive classroom behavior when Holden challenged Martel’s views on cultural assimilation.

Holden told Campus Reform that he had questioned the matter of cultural assimilation by citing news reports about two Muslim immigrants who erected a sign declaring that the Koran gives them the right to commit rape.

In an email that Martel sent to Holden accusing him of disruptive classroom behavior, she claims Holden had interrupted the class multiple times and “made a scene,” only stopping after a classmate intervened. Martel wrote:

“Then you raised your hand for most of the rest of class. When I acknowledged that I saw your hand but stated we would be hearing from your classmates instead, as you had already had your input, you said in a loud voice: ‘You work for me. I pay your salary.’”

Martel then sent out a second email about the altercation, not just to Holden but to the entire class, outlining “steps to re-instate civility in the classroom” and declaring emphatically that “hate speech” would not be tolerated.

Holden told Campus Reform that he eventually withdrew from Martel’s class. Holden sees the Bible incident as Martel’s and Northern Arizona University’s restriction of his free speech, calling it “a systemic problem, not just at this university, but across the United States” because most college professors are “pushing an ideology on students and any opposition to this is refuted and slashed.” While there may be students “who want to speak up,” they don’t “feel that they can because of fear about their grades.” And it’s not just students. Conservative-leaning professors face similar concerns in relation to keeping their jobs.

Casey Mattox, Senior Counsel of the Alliance Defending Freedom, tells Campus Reform that “public universities are supposed to serve as a marketplace of ideas, and Christian students are not second class citizens on their tax-funded campuses. By singling out a student’s religious views for discriminatory treatment a professor not only violates the First Amendment, but also disserves the very purpose of a university.”

Campus Reform contacted both Martel and Heng, offering them the opportunity to address Holden’s characterization of the events and offer their own perspectives, but neither responded in time for publication.

A reader received this automated reply when he emailed Prof. Heather Martel, who is claiming victimhood:

This email account is being trolled as a part of a political campaign to harass and intimidate university professors. To my colleagues, students, and friends, I am sorry for the inconvenience. If you are trying to reach me for legitimate NAU business, please use another method for reaching me.

If you are reaching out to me with the intent to harass and intimidate me, cease and desist. The story in the news is a lie. The emails and voicemails I am receiving are deluded, cruel, and disgusting. I will not be reading or listening to them. They will be reviewed by law enforcement officials.

We have the audio recording of Martel’s department chair Prof. Derek Heng saying that “Prof. Martel says that she doesn’t want you [student Mark Holden] sitting in front of her because you put, you know, a Bible out”. Let’s see Martel call that a lie!