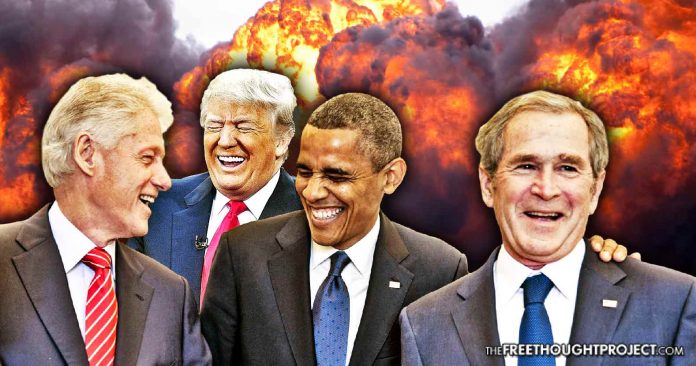 FBI Director James Comey hasn’t relented on the U.S. political establishment’s Blame Russia propaganda campaign, so his Russophobic rant in testimony to Congress over the Hillary Clinton email scandal hardly came as a surprise; but this banal obfuscation of blame and the nation’s toothless duopoly — not Moscow — constitutes the greatest threat to democratic rule, says a former MI5 operative.

And, as would be expected of a former UK Intelligence agent turned whistleblower, Annie Machon is not amused — calling the two-party system in the U.S. a “sham,” and a far greater threat to its own downfall than Russia could possibly be.

But that hasn’t quashed the flow of hot air from petulant U.S. officials.

“A huge portion of WikiLeaks’ activities has nothing to do with legitimate newsgathering, informing the public, commenting on public controversies, but is simply about releasing classified information to damage the United States,” Comey blustered on Wednesday.

Following former secretary of state and failed presidential candidate Clinton’s diatribe lambasting Comey, Wikileaks, and its founder, Julian Assange, as responsible for her failed campaign — while in the same breath claiming to take “absolute personal responsibility” in the matter — it was the FBI director’s turn to play the blame game.

But Comey, Clinton, and their ilk, Machon told RT in an interview published today, must shoulder the blame — and cease the disingenuous finger-pointing — as this new Red Scare-anoia could bring down the vestiges of democracy in the United States.

Members of the Senate Judiciary Committee grilled the FBI chief over his letter to Congress less than two weeks prior to Election Day stating the bureau had discovered new emails pertaining to the Clinton saga — a move which Hillary and the Democrat Party excoriated as throwing the election in favor of Donald Trump.

Comey, noting it is “fair to say that Russia is still involved in American politics,” categorically asserted Russia is to U.S. democracy “the greatest threat of any nation on earth, given their intention and their capability.”

Former MI5 officers Annie Machon and David Shayler abandoned the UK Security Service in 1996, to blow the whistle on rampant corruption, criminality, and incompetence in Western and British Intelligence, and after years on the run and in hiding — during which both and their friends and family received death threats — began public criticizing policy.

Asked to assess Comey’s brash statement on Wikileaks, Machon remarked the FBI director seems to have dug himself “into a hole” in multiple ways, as she explains,

“One, [Comey is] trying to assess Russia as the biggest threat to American democracy while no proof has been presented publicly about any of these over-inflated allegations about Russia trying to hack into American elections. Two, WikiLeaks is by any standards a publisher of information that is very much in the public interest. Not just the recent disclosure about the CIA, not just the disclosures from the Democratic National Committee last year or the Podesta files or whatever.”

Comey, Clinton, and pols on both sides of the aisle have crucified Wikileaks for publishing information as part of a political agenda — one loyal to Moscow, rather than allegiant to Western, ostensively democratic, power. Democrats and Republicans, alike, have pegged Wikileaks as a falsifier of information or publisher of so-called Fake News — but the publishing outlet has yet to release a single document proven to be fabricated or manipulated in any way.

That perfect track record should not only speak for itself, Machon suggests, but must lend constancy to Assange’s assertion such accusations from the U.S. and its allies merely mask the elitist establishment’s own culpability in the currently ailing democratic system.

Officials from either side of the duopoly also argue Wikileaks’ political motivations mean certain content won’t be released, making the outlet something besides a publishing organization — but Assange has repeatedly scoffed at the suggestion.

“WikiLeaks,” Machon continues, “for the last ten years, has been publishing information from around the world about financial corruption, about right-wing extremism, about the Bilderberg Group, about war crimes, about Chelsea Manning’s disclosures, American diplomacy, they publish what they think is in the public interest (which they have to rely on their sources giving to them – OK).

“So, they are a publisher by any standard. They are just a new hi-tech conduit for publishing as opposed to the old corporate media like the New York Times or the Washington Post.”

Yesterday, Comey stated the Russian government still meddles in U.S. politics, but not matter how authoritatively the FBI head proffers such an accusation, Machon and other critics say the evidence has yet to surface:

“Nobody anywhere appears to have seen any hard evidence about the alleged Russian hacking of the American election. This started as a sort of swerve that was put out by Hillary Clinton’s campaign to try and avoid accountability for the fact that she had apparently illegally used a private email server.”

It didn’t take long for officials to conflate documents published by Wikileaks with a (nonexistent) Russian agenda, the former intelligence official notes, but, “There is no evidence” that was or is the case.

“And then it suddenly became, ‘Russia hacked the election process,’ ‘Russia hacked Vermont’s energy grid,’” Macon adds. “This has all been disproven time and time again.

“This is so much hot air designed to obfuscate the fact that Hillary Clinton very badly lost the election last year. Also it is very convenient to try and push forward what is now being openly expressed finally; the American administration’s wish to try and prosecute Julian Assange by any means necessary, be it espionage, whatever it is.

“He has caused an embarrassment by publishing some of the information about what America is getting up to. So, they just want to get him in any which way, as well as other WikiLeaks staffers. I think James Comey is really sort of fanning the flames of what could be one of the biggest mistrials in history if this goes ahead.”

Where Russia does not present a clear and tangible threat to the U.S.’ democratically-based system, politicians and officials — the system’s strictest adherents and players — in actuality, do.

Machon explains that, for Americans, “the greatest threats to their democracy is, first of all, the two-party system which is actually a sham in a sense that it doesn’t matter who you vote for, the same government administration will get in. And the fact that most of the candidates who are put up for election to president in the US tend to be very heavily backed by big lobby organizations, by Wall Street. So, vested interests tend to be running a very corporatists’ state in America.”

For its part, Russian officials interestingly sided more with White House spokesman Sean Spicer — who distanced the administration from Comey’s allegations Russia is the ‘greatest threat.’

Russian Senator Franz Klintsevich, according Newsweek’s translation of a statement in TASS, observed, “In the U.S., the FBI is trying to change the administration.”

Klintsevich gently chided the FBI chief, adding, “Special services… can and should have their own opinion but it is better to keep that to yourself and not share it publicly. The White House’s reaction to FBI Director James Comey’s statement is undoubtedly a pass of the ball over to Russia’s court.”

Russophobic propaganda has, as intended, so inundated American popular and political culture, to stand vocally against that grain often finds one ostracized to a degree. Indeed, this new Red Scare efficaciously took up the slack ensuing decades rightly and necessarily eroded.