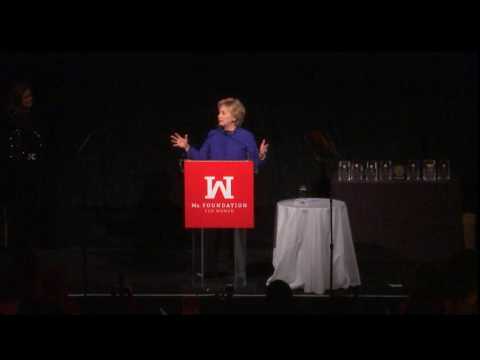 Hillary Clinton is the undead.

In two days this week, she appeared at three women’s galas:

Narcissists cannot tolerate criticisms and critics because how dare anyone criticize someone who’s superior to all of you?

On Wednesday, May 3, 2017, speaking at Ms. magazine’s Gloria Awards, Hillary once again blamed her losing the 2016 presidential election on those knuckle-dragging “misogynists” and “xenophobes,” whom she had called “deplorables”. The worst among them are “white men”. Hillary said, beginning at the 9:11 mark in the video below (I strongly suggest that you turn the volume down, not only because her voice is grating, but at some points she literally bellowed):

“So many of us let out a collective groan when we saw photos of groups of white men gathered around a conference table in Washington, making decisions about women’s health.”

And what she means by “women’s health” is the absolute right to kill the unborn and to contraceptives, including abortifacients, and to taxpayer-funded Planned Abortionhood.

Then Hillary feigned sympathy for women who are having a hard time in life, and has the gall to compare their hardship to her being criticized (“trolled”) on Twitter. She said (13:39 mark):

“Look, I know what it feels like. There are moments when just reading the news or scrolling through Twitter can be so depressing. But I just want all of those Twitter trolls out there to know that maybe if you had left us alone we might have gone out longer in the woods for those walks. But every time you hit those 140 characters demeaning and denying women’s voices and rights, we’re coming back at you.”

“We’re coming back at you”

Is that a threat?

Bring it on, Hillary.