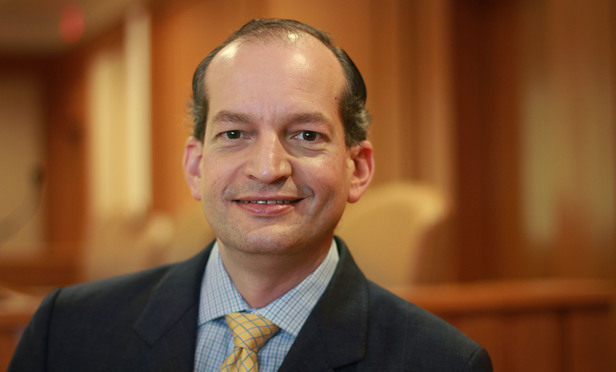 Washington, D.C. — Earlier this year, President Donald Trump promised to seek out sexual predators and those who are participating in the “human trafficking epidemic” and bring them to task. However, his recent actions in the White House appear to be doing the exact opposite.

Last week, the Free Thought Project reported on Trump’s pick for Labor Secretary, Alexander Acosta. As TFTP noted, former U.S. Representative, Cynthia McKinney, is none too pleased with this confirmation, tweeting shortly after the news,

Epstein is a convicted child molester and sexually abused no less than 40 underage girls. Despite this fact, Acosta protected him while serving as a U.S. Attorney in Florida.

These are undisputed facts — yet Trump still appointed Acosta.

Acosta’s appointment should come as no surprise, given Trump’s outspoken praise for Epstein, including referring to the convicted pedophile as a “terrific guy,” he is “fun to be with,” and “he likes beautiful women as much as I do, and many of them are on the younger side.”

Giving Trump the benefit of the doubt with Acosta would be easier had he not made those comments. It would also be easier to overlook if he didn’t just appoint another alleged sexual predator to his cabinet.

According to ProPublica, a political appointee hired by the Trump administration for a significant State Department role was accused of multiple sexual assaults as a student several years ago at The Citadel military college.

Steven Munoz was hired by the Trump administration as assistant chief of visits, and has been accused of sexually assaulting male students — not once — but at least five times.

As ProPublica reports, at The Citadel, five male freshmen alleged that Munoz used his positions as an upperclassman, class president and head of the campus Republican Society to grope them. In one incident, a student reported waking up with Munoz on top of him, kissing him and grabbing his genitals. In another, on a trip to the Conservative Political Action Conference in Washington, D.C., a student said that Munoz jumped on him in bed and he “felt jerking and bouncing on my back.”

“Munoz coerced, threatened, and convinced me to allow inappropriate touching, grabbing, and kissing by leading me to believe it was what I needed to do to gain acceptance in the corps of cadets,” one accuser said in their statement. “He threatened to call my upperclassmen who would be upset if I did not comply with him.”

Another victim described how Munoz “instructed me to sit on his bed during these meetings. … After a few meetings he began to rub my leg with his hand. He moved his hand under my shorts and the first time I pushed his hand off my leg he said he was just playing and that he did it with his other knobs so I shouldn’t mind. I had seen this in the past and when I asked my classmates about the interaction, they said when they resisted, he yelled at them for not trusting him and Mr. Munoz made them stay longer in his room.”

In another meeting, Munoz “put his other hand down my underwear until I again pushed him away, but he did not stop. He said as a new leader I had to learn to trust other leaders on the team and this was how I should show him I trusted him.” Munoz said “he read the Bible and knew what it said and I should not question his love of God. He continued to rub my leg and rub my private area. … He said this needed to stay between us and dismissed me.”

In spite of an investigation finding that these assaults “likely occurred,” a local prosecutor reviewed the case and declined to go after Munoz. Instead of charging Munoz with assault, he was let off with a warning only to be given several awards for “leadership, sound character, and service to others” upon graduating in 2011.

In spite of the Citadel investigation finding that “certain assaults likely occurred,” Munoz was able to weasel his way back onto the campus. Later that year, ProPublica writes, the school partially rescinded the no-trespass order, “permitting general access to public facilities and events, but no direct cadet interactions.” Asked why, the school pointed to the prosecutor’s decision not to seek indictments.

Despite the very public allegations of sexual assault, in 2012, staunch Christian, and RINO, Rick Santorum found no problem hiring Munoz either.

So how does a five-time accused sexual predator find his way on to the Trump train? Well, the answer to that question is fairly simple.

As Vice News points out, the Trump administration is no stranger to allegations of assault. Aside from his “grab ’em by the pussy” comment, the president himself has been formerly accused of sexual assault in court. In the 1980s, Trump’s former pick for secretary of labor, Andrew Puzder, was accused of domestic abuse, and Steve Bannon was charged with misdemeanor assault and battery in 2001, although the case was later dropped.

As the Free Thought Project reported last month, during Trump’s presidential run last year, Judge Tim Nolan of California, Kentucky, was serving as the chair of his campaign. In April, Nolan was arrested and charged with numerous felonies for the sex trafficking of children — all which took place while he worked on the Trump campaign.