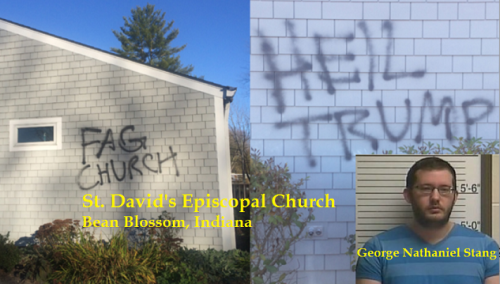 Last November, St. David’s Episcopal Church, a pro-LGBT church in Bean Blossom, Indiana, garnered national headlines when immediately after the 2016 presidential election, it was spray-painted with graffiti — the messages “Heil Trump,” “Fag Church,” and a swastika.

It turns out that, once again, the church vandalism is a fake hate-crime by — surprise! — a liberal.

In an interview with the IndyStar, the 26-year-old Stang explained that he vandalized the church as a “false flag” operation to rally people following Trump’s electoral victory. He said: “I guess one of the driving factors behind me committing the act was that I wanted other people to be scared with me. I’m very sad to have created more hate in a world that already has too much hate … The congregation doesn’t deserve it, the emotional turmoil I put them through.”

“It was November, shortly after the presidential election. Stang told everyone he discovered the graffiti when he arrived for Sunday morning services,” reported WTHR. “Detectives immediately suspected the crime was committed by someone familiar with the church. They said cell phone records put Stang in the area Saturday night.”

Following the election of Donald Trump last November, many claimed that there was a spike in hate crimes directed toward liberals, Muslims, and racial minorities. The Southern Poverty Law Center claimed in a report last December that over 1,000 hate crimes were committed between Nov. 9 and Dec. 12 of 2016:

“Overall, anti-immigrant incidents (315) remain the most reported, followed by anti-black (221), anti-Muslim (112), and anti-LGBT (109). Anti-Trump incidents numbered 26 (6 of which were also anti-white in nature, with 2 non-Trump related anti-white incidents reported) . . . . [A]round 37 percent of all incidents directly referenced either President-elect Donald Trump, his campaign slogans, or his infamous remarks about sexual assault.”

But Associate Editor of Reason Elizabeth Nolan Brown maintains this wave of alleged hate crimes was mostly comprised of hoaxes and exaggerations rather than actual bigoted violence:

“The bottom line is that when it comes to physical aggression inspired by this election, we are looking at a little more than a dozen incidents reported, over a 10 day period, in a country of roughly 318.9 million people—none of which resulted in serious injuries. Regarding the rash of hateful graffiti and signs popping up this week: while some was certainly meant to offend or inspire terror, other times it has turned out to be the work of anti-Trump forces who intended it as commentary on how they perceive ‘Trump’s America.’”