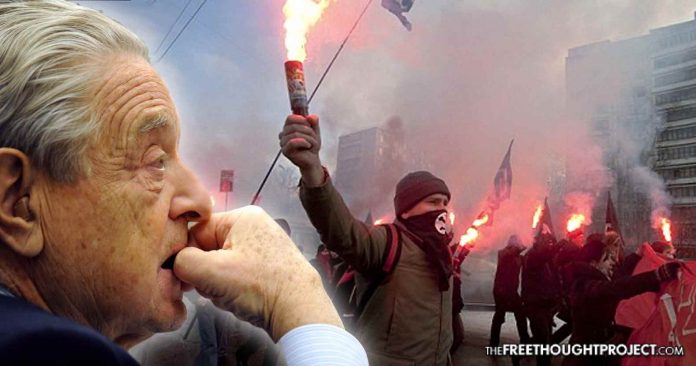 Billionaire globalist and altogether controversial figure, George Soros, is now the subject of a $10 billion lawsuit accusing him of being a “racketeer billionaire” for meddling in the affairs of a sovereign African nation — purely for personal reasons — in what critics say typifies his modus operandi.

For those who skimmed that first sentence, yes, that’s Billion — with an emphatic capital “B.”

FOX News reports the 86-year-old financier and manager of a global network of nonprofits will be forced by BSG Resources’ lawsuit to answer for manipulating the politics and economics of Guinea for his own benefit.

“Soros was motivated solely by malice,” BSGR states in the suit, “as there was no economic interest he had in Guinea.”

“Companies controlled by Israeli mining magnate Beny Steinmetz sued fellow billionaire George Soros, claiming he cost them at least $10 billion through a defamation campaign that stripped them of rights to an iron ore deposit in Guinea and other business opportunities around the world,” Bloomberg reported.

Interestingly, as opposed to innumerable civilians directly affected by Soros’ notoriously shady string-pulling, the lawsuit originates with the billionaire’s peers — who claim his monied influence bilked them of at least as many billions as claimed.

“To Soros, Steinmetz’s success, as well as his active, passionate promotion of Israeli life, business and culture are anathema,” the lawsuit states. “Soros is also well known for his long-standing animus toward the state of Israel.”

Steinmetz was arrested in December 2016 over allegations he and BSGR forked over millions in bribes to government officials for mining rights on Simandou — but those charges had been based on “fabricated reports by Soros-funded companies,” BSGR explains in its suit.

Bloomberg notes Mamadie Toure, the fourth wife of the former president of Guinea, “who implicated BSGR and Steinmetz, received $50,000 from an adviser to President Alpha Conde and $80,000 from an ‘agent or affiliate of Soros,’ according to the complaint.”

States the lawsuit, “Soros’s financial clout gave him power over Guinea’s processes of government, which he then thoroughly abused” — and only as a matter of enmity, since the obscenely wealthy globalist stood to gain nothing economically in the Western African nation.

Iron ore from the untapped Simandou is thought to be of the highest grade in the industry, with reserves estimated to comprise over two billion tons — making this legal brawl among tycoons a matter of grave financial consequence — at least, to those other than Soros.

Years of allegations and accusations of underhanded business affairs between BSGR and Soros had not led the company to take direct action until now. In its complaint, “BSGR alleges that Soros was driven by a grudge dating back to 1998 around a business in Russia and his alleged hostility towards Israel.”

Indeed, accusations the Hungarian-American regularly disguises shady political maneuvers as humanitarian in nature — when the contrary tends to be true.

Among many other entities, Soros’ Open Society Foundations — an umbrella over multiple ostensively beneficial organizations — has long been suspected of funding and training political movements toward ends favorable to the globalist.

Even officials from his homeland of Hungary affirm this, as top education official, Minister of Human Capacities Zoltan Balog, asserting recently, as quoted by FOX,

“We are committed to use all legal means at our disposal to stop pseudo-civil society spy groups such as the ones funded by George Soros.”

Soros reaches deep into personal financial reserves during U.S. elections, often spending ample funds for desirable candidates in every level, from District Attorneys to presidential hopefuls — and frequently bequeaths millions to contenders on both sides of the aisle.

In fact, Soros’ undeniable influence over American politics will be central to BSGR’s case against him, as the suit claims sway over the U.S. Department of Justice after it sided with the billionaire on the bribery issue.

J. Christian Adams, former Obama-era DOJ attorney, told FOX the system had been ‘at Soros’ beck and call,’ noting he had been instrumental in reforming police procedures and in bringing about changes to voter ID laws. Adams told the outlet,

“Soros’ organizations in the U.S. were instrumental in shaping DOJ policy under the Obama administration.

“Americans do not understand the extent to which Soros fuels this anti-constitutional, anti-American agenda.”

A spokesperson for Soros told FOX the lawsuit is a diversionary tactic for the company, as BSGR only wishes to deflect from its own wrongdoing.

Whatever the ultimate outcome of the BSGR lawsuit, it’s clear the planet can no longer stomach the parlor game attitude Soros effects when meddling in the affairs of sovereign nations, entities, and individuals.