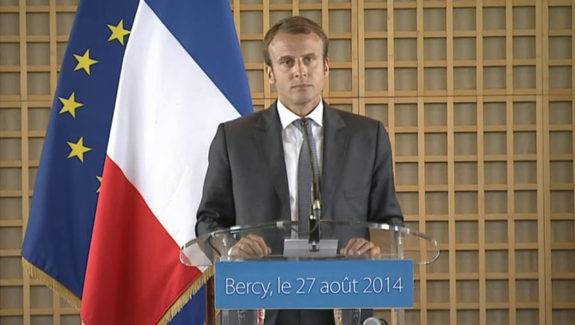 On the eve of what may be France’s most important presidential election between globalist Emmanuel Macron and nationalist Marine LePen, the French government is telling the country’s media that they must not publish damaging emails of Macron’s tax evasion so as “to prevent the outcome of the vote being influenced.”

French TV news channels, being partial to Macron (just as America’s MSM openly favored Hillary Clinton in the 2016 election), are compliant and have not mentioned the Macron emails. But the left-leading Liberation prominently featured the news on its website, while saying that the information had been distributed in an “unethical method,” and that timing of the hack is meant “to create chaos“.

The emails, which Macron claims had been hacked, were posted on the 4chan chat forum yesterday afternoon.

As William Craddick of Disobedient Media puts it, the leaked documents:

“appear to show that French Presidential Candidate Emmanuel Macron entered into an operating agreement for a Limited Liability Company (LLC) in the Caribbean island of Nevis, and that the company may have had a business relationship with a bank which has been previously involved in tax evasion cases in the Cayman Islands . . . .

[Less than a month ago in] April, Macron denied that he was hiding offshore accounts or inheritances from French authorities, even as his opponent François Fillion became mired in similar allegations. If confirmed as authentic, the documents would prove [Macron’s denial] … to be untrue and provide important clues as to where the hidden funds might be located.”

Since 4chan deletes its posts at the end of each day, you can’t read those posts on 4chan, but they are archived here.

In the interest of the French people having the knowledge about presidential candidate Macron so as to make an informed choice in the ballot box, FOTM is joining other blogs in exposing the content of the Macron emails, specifically two documents.

The first document is an operating agreement bearing Macron’s name and signature which was drawn up on May 4th, 2012 to form an offshore company, La Providence LLC, in Nevis, a small island in the Caribbean described by Bloomberg as a popular tax haven in that offshore LLCs in Nevis are guaranteed secrecy and privacy. Information about company owners is neither published nor available to the public.

Below is a screenshot of the operating agreement, showing Macron’s name:

A second document provides evidence of a business relationship between Macron and a bank with a history of tax evasion, in the form of a fax sent to Macron’s La Providence Ltd. from the First Caribbean International Bank based in Barbados. According to Forbes, First Caribbean International Bank was implicated as a facilitator of tax evasion in 2013. The bank was also named by Reuters as a player in fraud in the 2015 Fédération Internationale de Football Association (FIFA) scandals.

Below is a screenshot of the fax referring to a returned check (cheque) that First Caribbean International Bank had sent to Macron’s La Providence LLC: