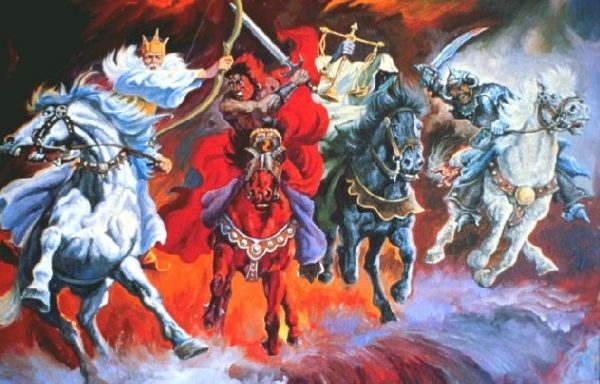 Are we on the verge of the worst times in all of human history? We live at a moment when prominent leaders in the scientific world and in the religious world are both urgently warning that humanity could soon be facing a nightmarish apocalyptic future. Weather patterns are rapidly changing, the crust of our planet is becoming increasing unstable, “superbugs” that are resistant to antibiotics threaten to completely render our best medical treatments obsolete, the number of global terror attacks continues to rise year after year, and thanks to weapons of mass destruction humanity now has the capability of completely destroying itself several times over. They often disagree about why it will happen, but an increasing number of scientific and religious leaders have come to the exact same conclusion that the future of humanity is very bleak.

Despite the fact that technology is increasing at an exponential rate, many top thinkers in the scientific community now believe that there is a very good chance that the human race will be facing extinction by the end of this century. The following comes from an outstanding Salon article…

The late microbiologist Frank Fenner, for example, whose virological work helped eliminate smallpox, predicted in 2010 that “humans will probably be extinct within 100 years, because of overpopulation, environmental destruction, and climate change.” Similarly, the Canadian biologist Neil Dawe reportedly “wouldn’t be surprised if the generation after him witness the extinction of humanity.” And the renowned ecologist Guy McPherson argues that humanity will follow the dodo into the evolutionary grave by 2026.

Those are some very sobering words.

Perhaps you have never heard of any of those guys before, but I know that virtually all of you have heard of Stephen Hawking. According to Hawking, we have now reached “the most dangerous moment in the development of humanity”…

“Now, more than at any time in our history, our species needs to work together. We face awesome environmental challenges: climate change, food production, overpopulation, the decimation of other species, epidemic disease, acidification of the oceans. Together, they are a reminder that we are at the most dangerous moment in the development of humanity. We now have the technology to destroy the planet on which we live, but have not yet developed the ability to escape it.”

The last 100 years have been unlike any other era in human history. We have constructed towering cities all over the planet, we have developed remarkable technologies that have enabled us to make the impossible more than possible, and the population of this planet has shot up to a staggering 7 billion people.

But in order to feed our exploding population, we are going to need another miracle. According to Megan Clark, the head of Australia’s national science agency, more food will need to be produced over the next 50 years than has been produced throughout the rest of human history combined…

“It is hard for me to comprehend that in the next 50 years we will need to produce as much food as has been consumed over our entire human history,” she said.

“That means in the working life of my children, more grain than ever produced since the Egyptians, more fish than eaten to date, more milk than from all the cows that have ever been milked on every frosty morning humankind has ever known.”

These are the types of things that keep scientific thinkers up late at night. At this moment, great famines are already hitting places such as Venezuela and Yemen, and this trend is only going to accelerate in the years ahead.

Hopefully mass death for the human race will be delayed for as long as possible, but one thing that is already happening is widespread species extinction among wild animals all over our planet. The following comes from one of my previous articles…

It has been called “the long extinction”. Our planet is in the process of dying, and as you will see below, this process of death and destruction appears to be accelerating. According to a report that was put out by the World Wildlife Fund and the Zoological Society of London, the number of wild animals around the globe appears to be decreasing at a rate of about 2 percent a year. 2 percent may not sound like a lot to you, but over 10 years that would mean that 20 percent of all wild animals in the world would be gone. And according to that same report, it is being projected that the total loss of wildlife during the 50 year period from 1970 to 2020 will be a staggering 67 percent.

For religious leaders, the concerns are often more spiritual in nature.

Many Christians are convinced that the return of Jesus Christ is rapidly approaching, and meanwhile many Muslims are expecting a figure known as “the Mahdi” to come back soon. Here is more from the Salon article that I quoted earlier…

Returning to religion, recent polls show that a huge portion of religious people believe that the end of the world is imminent. For example, a 2010 survey found that 41 percent of Christians in the U.S. believe that Jesus will either “definitely” or “probably” return by 2050. Similarly, 83 percent of Muslims in Afghanistan and 72 percent in Iraq claim that the Mahdi, Islam’s end-of-days messianic figure, will return within their lifetimes.

As I discussed in The Rapture Verdict, I certainly believe that anyone that is able to stay alive through the cataclysms that are coming will have the opportunity to witness the return of Jesus Christ. So many ancient prophecies found in the Bible are being uniquely fulfilled in our generation, and it is truly an exciting time to be alive.

Unfortunately, many are not prepared for the great challenges that we will have to face before Jesus comes back. The following prophecy was recently given by Jeff Byerly…

There are a lot of men who are taking puzzle pieces and forcing them in places they do not go and it is making the picture unclear. The end of this season will bring clarity and you will understand exactly where you are when the fiery “kickoff” event happens. The financial collapse will soon follow. Then food will be hard to come by and many will starve but my remnant will feed even greater multitudes than I did, for I have gone to the Father. The whole world shall once again go to war and over one fourth of the inhabitants of the earth shall be killed by guns and bombs, by famine, disease and the beasts of the land. There will be many martyred during this time and I will avenge their deaths when the number of them has been fulfilled.

All this will happen before the day of the LORD. The great day Our indignation, vengeance, retribution and wrath shall be poured out upon the children of disobedience. No man shall hide from Us. We shall find all those deserving just punishment. There will be a global earthquake caused by an asteroid hitting the sea. There shall be tsunamis worldwide and every mountain shall be moved and every island will be out of place. The very atmosphere will be ripped open and recede like a rolled up scroll. The sun will be black and the moon will be blood, gross darkness shall cover the people and the whole earth for three days as in the time of Exodus, but My the houses of My people shall have light and people shall become light for they will be changed and My glory shall be shown on them. My children will be shown clearly to the world who they are!

Of course many other men and women of God have been warning about many of the exact same things, but most people are choosing not to listen.

Personally, I am entirely convinced that we are living during one of the most critical times in all of human history. The years ahead will be incredibly difficult, but for those that are part of the Remnant they will also be incredibly thrilling.

Great shaking is about to begin.

For those that know who they are, who they belong to and where they are going, that is actually very good news.