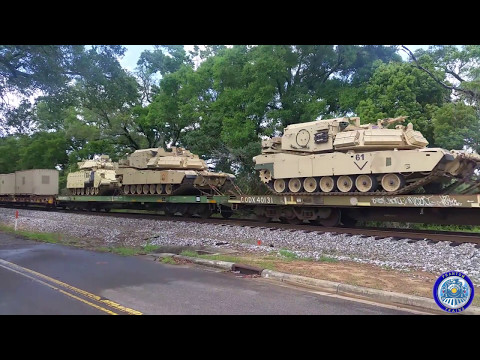 Armorded brigade rolls on railcars to Florida for “deployment”

(INTELLIHUB) — According to a report, an ex-military eyewitness spotted an “entire armored brigade” heading to South Florida via train.

The report posted by Already-Happened.com reads as follows:

“I caught a Military Transport Train headed to South Florida (of all places). I’m ex-Army, and this is baffling even to my active-duty buddies. Can’t figure out where they are going to. If they were going to Afghanistan or a similar area, they would have left from the West Coast, not Florida. The assumption is that they are headed to somewhere in Europe to beef up border defenses among NATO nations in the event of a war. Keep in mind, that there were a total of 4 trains that carried an entire Armored Combat Brigade Team. I was only in a position to record the 4th and final train (It has Bradley’s, Abrams, Howitzers, etc), and hundreds of ‘containers’ that most likely holds support equipment and munitions.

The military equipment includes the following:

All of the ‘trucks’ are part of the Family of Medium Tactical Vehicles (FMTV).”