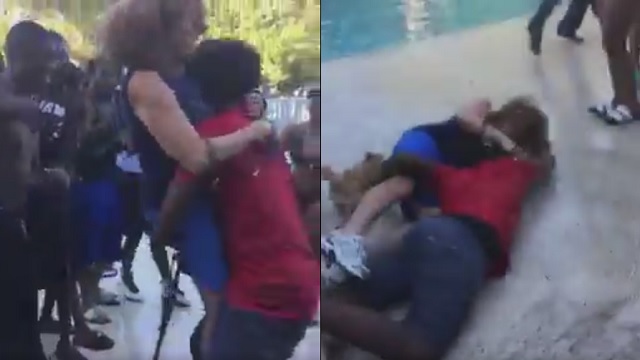 An elderly white woman was slammed to the ground and then thrown into a pool along with her dogs on Saturday after she politely asked a mob of party-goers in South Florida to lower their music.

According to MTONews, the woman “suffered serious head trauma” and almost drowned.

MTONews reports she was “later rushed to the hospital and is currently in STABLE condition” and police are investigating the incident.

The attack has so far gotten zero mainstream media coverage.

Here’s a flyer for the event which was shared on social media: Here’s another shot of the block party: While some are trying to justify the attack saying the man “slipped,” he never should have laid his hands on her in the first place. The fact is after slamming her to the ground incredibly violently, the thug then chose to pick her up and throw her into a pool. This elderly woman could have easily been killed.

While the media is currently trying to act like this never happened, imagine for a moment the outrage if an elderly black woman went to a frat boy pool party and asked them to turn down the music, then a white frat boy picked her up, slammed her to the ground to the cheers of his frat boy buddies, and then threw her in a pool leaving her for dead.

That would get 24/7 coverage and be characterized as a hate crime and an indictment on all white people. Instead, as the races are reversed, it’s being completely ignored.