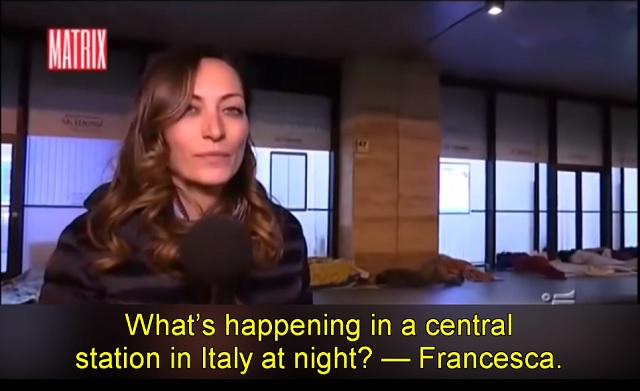 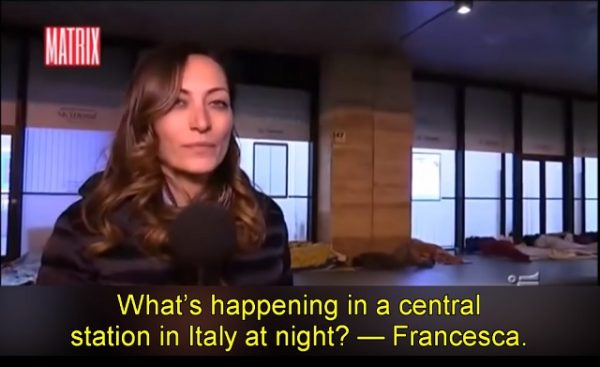 Police say the attacker was a 37-year-old migrant from Ivory Coast in West Africa who was hit with a deportation order in September 2016.

From LiguriaNotizie.it (translated with Google):

“Thanks to all of your closeness. Thanks to the hero taxi driver, the Army, the Police ” . And ‘This is the message that Francesca Parisella, journalist assaulted live during the last episode of the Matrix, while he was making a service on the degradation of Rome’s Termini Station, which at night turns into a giant dormitory for the homeless.

The correspondent of the deepening of Channel 5 program, was connected live during the episode last Wednesday April 3, 2017, with the study from Rome Termini Station, around 23.30 pm, in via Marsala, and was commenting on the situation while the cameraman who was with her resumed, at a safe distance, the long line of immigrants homeless who slept in beds of fortune placed against the walls. When suddenly the connection was interrupted abruptly. Then, after a few seconds, she is back on the air with Parisella explaining always live “We were attacked …” .

But at this point, the incredible has happened, all live on television. Suddenly the poor Francesca Parisella launched the chilling screams, that made his blood run cold is the conductor Nicola Porro that all the people in the studio, as well as to all the viewers at home. The reporter shouted, his voice choked with fear: “What do you want? Are you crazy? ” , And after having desperately still screaming started racing, as was understood by his heavy breathing echoing in the study.

Matrix Studio literally paralyzed with fear, with the tension that was cut with a hatchet and conductor Nicola Porro who first whispered “Oh My God …”, and then blurted out: “I would say at once to the production instead of sitting here in … call the police immediately. ”

As it was explained, the crew of Mediaset was attacked by an immigrant who first hurled split the operator’s camera, and then tried to beat up the journalist pursuing her while escaping. Fortunately, a taxi driver who was passing by, the scene view, it came to the aid of the reporters making them climb into his cab and putting them to safety, while the police were called.

On site are so arrived Polfer officers from the State Police, the Judicial Police and the Italian Army personnel have identified and blocked the attacker: a 37 year-old with no roof of Ivory Coast without no documents or residence permit, with different background and even already hit by a deportation order issued by the Prefect of Rome in September 2016.

The cultural enrichment of Europe continues.