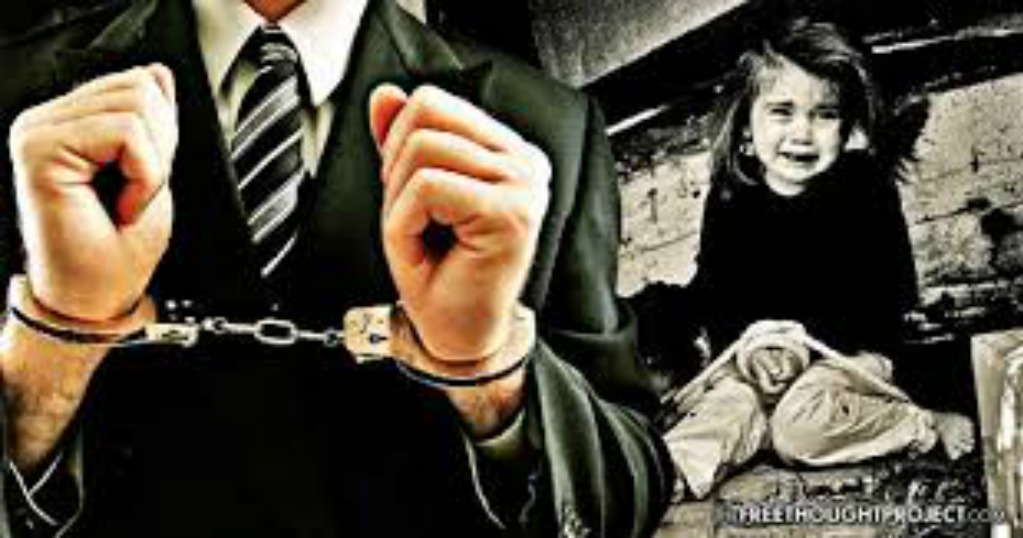 Washington, D.C. – After a nearly two-year investigation, 870 suspected pedophiles have been arrested across the world, and least 259 sexually abused children have been identified in the wake of major underground online global pedophilia network being taken down, according to the FBI and European authorities.

The Federal Bureau of Investigation (FBI) and Europol announced the arrests on Friday, only days after a court sentenced Florida-based Steven Chase, founder of the so-called Playpen pedophilia network, to 30 years in prison.

The arrest of Chase in December 2014 was the impetus for a global probe into the users of the members-only forum, which culminated in the nearly 900 arrests.

Unsurprisingly, this massive pedophile bust has failed to crack the pervasive US media censorship regime, as not a single mainstream corporate media source in the United States has reported on this story. Perhaps, within those 900 sickos, there are some folks who have enough power not to let their names out.

According to a report by German media conglomerate, Deutsche Welle:

Playpen was accessible in what is known as the “darknet,” where internet users can engage in illegal activities using encryption and anonymity software in an effort to hide their identities. The secret network allowed anonymous users to engage in a forum where they could share photos and videos showing the sexual abuse of children.

As part of its investigation, called “Operation Pacifier,” the FBI managed to use to malware to seize the Playpen website and server, which allowed authorities to track and identify Playpen users.

Law enforcement authorities then took over the network and operated the pedophile site for several weeks – technically making them facilitators of child pornography themselves — hacking and tracking users of the site by installing malware onto their computers.

And while virtually everyone applauds the arrest of pedophiles, civil libertarians have pushed back as to the legality and manner in which the FBI operated, rightly claiming that a single search warrant should not allow law enforcement to hack into and search over 1,000 computers, according to comments made by the Electronic Frontier Foundation (EFF) regarding “Operation Pacifier.”

“The warrant here did not identify any particular person to search or seize. Nor did it identify any specific user of the targeted website,” the EFF said. “It did not even attempt to describe any series or group of particular users.”

In a statement Friday, Steven Wilson, head of Europol’s European Cybercrime Center, said the case demonstrated how law enforcement needs to use such methods to fight criminals who can hide behind online anonymization and encryption programs.

“We need to balance the rights of victims versus the right to privacy,” he said. “If we operate by 19th century legal principles then we are unable to effectively tackle crime at the highest level.”

Essentially, Wilson is trying to claim there is virtue in giving up liberty for safety – a complete and utter fallacy of the highest order – but which underpins the rise of the ever-growing global police state that is built upon a framework of an unflinching military-intelligence-industrial complex with imperial ambitions.

Make no mistake that this is just the latest case to emerge in what is now being dubbed #PedoGate. #PedoGate refers to the increasingly common recognition of international pedophile rings, which has previously been steadfastly covered up by the western fourth estate.

Speaking to the scope of the problem, after President Trump held a press conference in February, in which he detailed his plans to go after the victims of the “human trafficking epidemic,” former U.S. Congresswoman Cynthia McKinney weighed in on the subject, noting that going after child predators will lead to the downfall of both Republicans and Democrats in the United States — as this problem goes all the way to the top.

As the Free Thought Project has consistently pointed out, pedophilia among the global power-elite is rampant.

In February, the Free Thought Project reported that the police chief recently came forward and confirmed that the former Prime Minister of England, Sir Edward Heath, had raped dozens of children. The department also noted how those within the government helped cover up these crimes.

We previously reported on the high-profile elite pedophilia scandal that gripped the U.K. – with its thousands of victims – being unceremoniously swept under the rug, which is indicative of the scope and breadth of the actual problem. In fact, the problem is so rampant in England that officials issued an order last month to stop naming streets and landmarks after local heroes and politicians because they could later be exposed as pedophiles.

In the case of the U.K. Inquiry, historical abuse of thousands of children by politically connected elites, celebrities, and politicians was brought to light — with an official inquiry being started — only to have the inquiry “crumble” after heavy pressure was exerted by highly placed power brokers within the U.K. establishment.

This was almost the exact same scenario as what took place in the United States in what became known as the Franklin child sex ring coverup — which involved high-level Republicans during the George H.W. Bush administration. Once the FBI took over the investigation from state authorities, it turned into a witch hunt to persecute the child victims – going so far as to charge them with perjury in a successful attempt to scare the other 70+ victims to recant their testimony regarding the child sex ring.

While the story received a small measure of newspaper coverage, there was a complete blackout of the scandal by the mass media, thus most Americans have never heard about this scandal that reached all the way to the White House.

Domestically, there are relatively few high-level arrests, as anytime ‘the elite’ are mentioned alongside the term ‘pedophile,’ the Praetorian guard, aka the corporate media, shout down all those who dare pose any questions about those in power abusing the most vulnerable among us.

For example, former U.S. Speaker of the House of Representatives, Dennis Hastert, a known serial child rapist, was never charged for his numerous crimes against children, which the FBI knew about, and had evidence of, for over a decade.

According to FBI whistleblower and Newsbud Editor-in-Chief, Sibel Edmonds:

Since 1996 the FBI has had tons of information on Hastert which was gathered in Chicago by the FBI’s Chicago Field Office. The incriminating criminal evidence in those files range from bribery, extortion, fraud, money laundering and embezzlement, to sexual crimes against minors and participation in foreign-operated drug operations.

Since 1997 the FBI has had much hard evidence on Hastert gathered by the FBI’s Washington Field Office. The documented deeds range from espionage to foreign bribery.

But that’s not all. The FBI also has had hard data on Hastert’s sexual violations outside the United States. The involved countries include Vietnam, Thailand, Turkey and Morocco, among others. This also included sexual favors as means of foreign bribery. Interestingly, the CIA had been documenting those sexual activities for many years, and not only on Hastert but on many others; elected and appointed.

Edmonds has noted that the intelligence apparatus utilizes the damning information they maintain on these public officials’ pedophilic activities as a means of controlling public policy decisions from the shadows. The fact that Hastert rose to Speaker of the House, when his activities were well documented by the FBI and CIA highlights precisely to how intelligence services utilize total information awareness to influence and control elected officials.

Additionally, NSA whistleblower Russell Tice, who was a key source in the 2005 New York Times report, which blew the lid off the Bush administration’s use of warrantless wiretapping, has publicly confirmed the targeting – and blackmailing – of top government officials and military officers, including Supreme Court Justices, highly-ranked generals, Colin Powell and other State Department personnel.

In an appearance on Edmond’s Boiling Frogs Post blog, Tice stated that he held NSA wiretap orders targeting numerous members of the U.S. government, including one for a young senator from Illinois named Barack Obama.

“In the summer of 2004, one of the papers that I held in my hand was to wiretap a bunch of numbers associated with a forty-some-year-old senator from Illinois. You wouldn’t happen to know where that guy lives now would you? It’s a big White House in Washington D.C. That’s who the NSA went after. That’s the President of the United States now.”

How much information on pedophilia and child pornography does the deep state have on all these politicians like they had on Hastert? Is it not possible, indeed, likely, that the shadow state maintains this information on individuals for the sole purpose of controlling them?