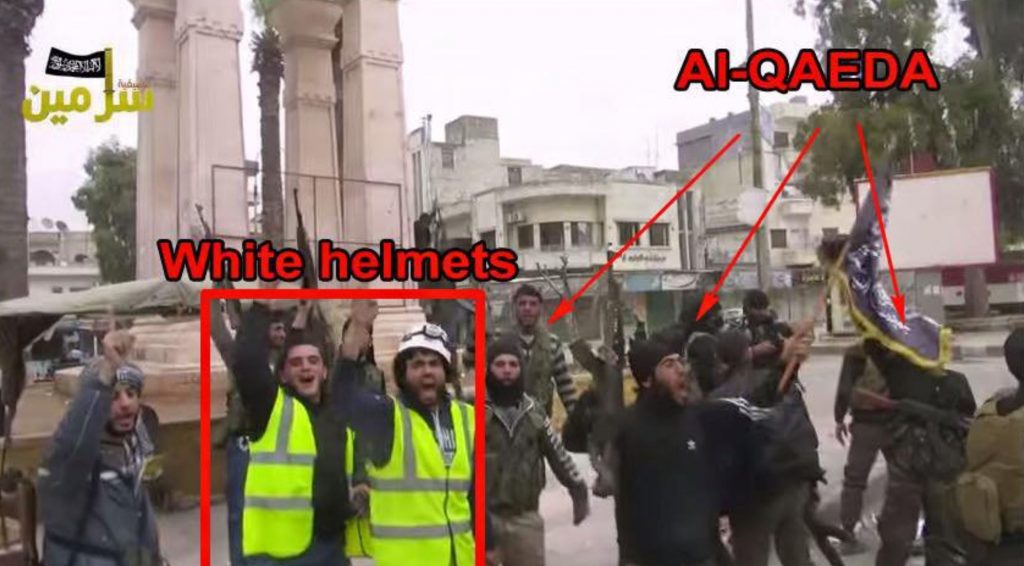 As hard as the Western corporate media works to employ propaganda techniques and tragic narratives with which to convince their respective populations that the terrorists funded by Western governments fight against the Syrian government are actually democracy-loving freedom fighters and selfless activists, more and more revelations come to light showing the true nature of heavily hyped groups like the White Helmets.

Indeed, it seems that, every week, another piece of evidence emerges revealing the White Helmets to be nothing more than a wing of al-Qaeda/al-Nusra designed to produce clever propaganda videos to tear at the usually hardened heartstrings of unsuspecting Americans. After having been exposed for housing themselves in the same building as Nusra/Qaeda, carrying weapons (also see Vanessa Beeley’s article here), using dangerous and erratic rescue and emergency techniques, proudly proclaiming support for terrorists and the desire to see Syrian military personnel killed, the White Helmets went on to sign documents and proclamations in support of Nusra in its effort to prevent civilians from access to drinking water.

Now, a little-known video made by the leader of Tahrir al-Sham (al-Qaeda in Syria), Abu Jaber, on March 16, 2017, is making the rounds of social media, showing Jaber praising the White Helmets as the “hidden soldiers of the revolution” and thanking them for what they do.

“Second, a message of thanks and gratitude to the hidden soldiers of our revolution,” Jaber said. “On top of the list are the parents of the martyrs and the men of the White Helmets.”

On March 16 the leader of HTS (Al-Qaeda in #Syria) Abu Jaber thanked the #WhiteHelmets & called them the "hidden soldiers of the revolution" pic.twitter.com/1ac8M8xb5d

The question then becomes, “If the White Helmets are so unbiased, why does Tahrir al-Sham consider them to be heroes of the ‘revolution?’” Certainly, al-Qaeda would not consider any organization who assists civilians instead of solely the bearded soldiers of God as heroes of their movement. The answer, of course, is simple. The White Helmets are nothing more than a propaganda wing of al-Qaeda itself, funded by Western governments and NGOs for the purpose of creating false narratives and shock videos designed to manipulate the Western public.