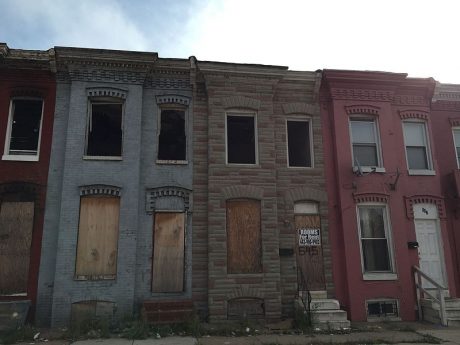 It is hard to believe that Baltimore was once one of the greatest cities in the entire world.  Unlike nearby Washington D.C., Baltimore is a blue collar city that is home to some of the hardest working people in America.  When I was in high school, my brother and I were huge fans of the Baltimore Orioles, and once in a while our parents would drive us from our home in Virginia all the way up to Baltimore to see them play.  As an adult, I spent a number of years living near D.C., and I would take frequent trips up to Baltimore.  To say that the city is in a state of decline would be a major understatement.  Everywhere you look there are abandoned buildings and homes, and as you drive through some of the worst areas you can actually see drug addicts just lying in the streets.  Just like so many other communities all over this country, decades of liberal policies have taken a brutal toll, and now the city is just a rotting, decaying shell of the glorious metropolis that it once was.

There are some sections of Baltimore that you simply do not go into once the sun goes down.  And actually it isn’t a very good idea to go into those areas during the day either.  The crime in the city has gotten so bad that authorities have actually formally requested help from the federal government…

According to The Baltimore Sun Newspaper, the city has logged in 118 homicides today with the projection of >400 murders for year’s end. It’s so bad here that Baltimore’s Mayor has asked the Federal Government for help in attempt to regain control. Even the police union sounds the alarm of an officer shortage leading to decrease in patrols. All of this is occurring as the Baltimore population declines, nearing a 100-year low, U.S. Census says.

Through the end of April, Baltimore was on pace for the highest murder rate in the history of the city.

The opioid epidemic is the quiet killer that has been leaving a trail of bodies on the streets of Baltimore.

“The individuals that are putting these drugs on our street, they’re killing people on our street,” said deputy commissioner Dean Palmere of the Baltimore Police Department.

Drug overdoses is expected to have killed 2,000 people statewide in 2016 and more than 800 in Baltimore alone.

“There are more people dying from overdose here in Baltimore City, than there are dying of homicide,” said Baltimore City health commissioner Dr. Leana Wen in February.

That last paragraph amazed me when I first read it.

Even though Baltimore is on pace for the highest murder rate in the city’s history, more people are actually dying from drug overdoses.

And now police in the city are warning of a new opioid that is reportedly “100 times more potent than heroin”.  It is called Carfentanyl, and it can kill people almost instantly.

I would like to share with you a short YouTube film put out by Alastair Williamson just a few days ago entitled “The Baltimore Experience”.  No matter how much I write, I could never communicate the devastation in the city quite like this little video does…

Did you see the part near the end where Williamson stops to offer a bottle of water to a man that is just lying in the street?

Hopefully that particular man is not on anything, but it is quite common to see people lying around like zombies in cities where an opioid epidemic is raging.  These are very cruel drugs, and they will utterly consume you if you allow them to.

The more drugs that come in, the worse the violence gets, and within the past 24 hours we have seen four more senseless murders in Baltimore…

Two men were shot and killed Tuesday morning in west Baltimore, police said. Officers responded at 5:52 a.m. to the shooting on the 2800 block of Lanvale Street.

Police said officers found the victims in and around a vehicle. Both had been shot in the head and were declared dead at the scene, police said.

The victim, identified as Charles Gatuthu, 35, was shot in the head and body at about 7:45 p.m. in the 6100 block of Boston Street. He was taken to Johns Hopkins Bayview Hospital, where he died.

A 25-year-old was shot and killed Monday afternoon in west Baltimore, police said.

Of course Baltimore is far from alone.  On Monday, I wrote about how Chicago is becoming a gang-infested wasteland, and on Tuesday we got news of Chicago’s 200th homicide so far in 2017.

Chicago police issued a bulletin Monday warning its officers about gangs armed with high-powered weapons, after three people were shot to death over the weekend – including two attending a memorial for the earlier victim.

Department spokesman Anthony Guglielmi said the three people who were killed in the shootings Sunday were all members of the same street gang.

Sometimes it is hard to believe that this is still America.

The precious people that are getting hooked on these drugs and that are committing these murders were once innocent little boys and girls.  Somewhere along the way they were led down the wrong path, and this is happening on a massive scale all over the nation.

What we need are some real solutions.  We need to restore the principles and the values that this nation was founded upon, and we need people that are willing to step forward and take this nation in a different direction.

In times of great darkness, light is needed the most, and at this moment in our history we are in desperate need of some lights.