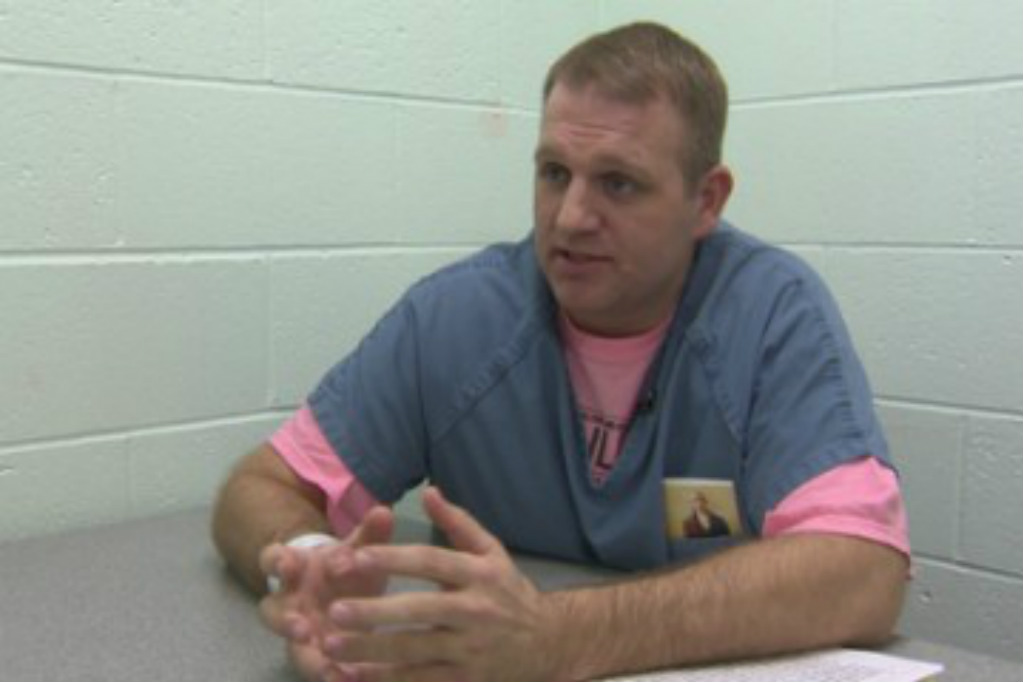 I have always questioned the need for prisons. They are an unjust means of justice. Even more so, those that are for profit utilize the system to make money and push for quotas to be fulfilled by the states. Here is just one recent example of such abuses of prisoners. Ammon Bundy, who became a national household name during the Bundy Ranch siege in 2014 and the protests at the Malheur Wildlife Refuge in Oregon in 2016, was tortured and abused by a guard at CCA in Pahrump Nevada last week. Subsequently, when word got out, the guard was sent home.

First, take a listen to a phone call from Ammon that was recorded as he was in solitary confinement (video courtesy of Kelli Stewart).

According to Bundy, he was handcuffed in a 3×3 foot shower for 13 hours, stripped naked and then thrown in the hole. This was all because he refused to allow a guard to take his shirt that was hanging off his bed, which the rules stipulate that nothing is to be hanging over the side. This was his only shirt to wear, and had it been taken, he would have not been allowed to come to breakfast.

Here are some photos provided by John Lamb of what these men, who have not been convicted of a crime have to endure.

Prisoners are constantly handcuffed and Shackled, even while being moved about throughout the prison itself. Strip searches just to be able to have video visits and many other inhumane treatments of unconvicted detainees while waiting trial. Ammon Bundy and 18 other political prisoners in Nevada have been held for over a year and a half in these inhumane conditions while awaiting trail.

Prisoners that are kept in solitary confinement for weeks at a time are restricted with phone calls to family or even lawyer. This picture portrays a prisoner having to be on his knees while talking to his lawyer, while a guard dial the phone for him and hands it through a slot in the door, this is also were his food is passed through.

These are small cages that are a form of punishment and solitary confinement in a prison in Colorado. Being in solitary confinement doesn’t even mean you’ve been convicted of a crime, you could just be waiting on trial and violated a rule or get on a guards bad side and be put in one of these cages for up to 72 hours without sleep and the lights on constantly.

This photo gives you a small view of what a solitary confinement cell looks like in some prisons in America. But this does not do real justice to the inhumane treatment that Ammon Bundy just received in Prompt Nevada where he was kept handcuffed and naked for 13 hours with his hands behind his back in a cell that was 3 feet by 3 feet, and no food or water.

Stop and think about that for one moment. This is a man who has been acquitted on similar charges in Oregon that he is facing in Nevada. He has not been found guilty of any crime and yet, his rights are being abused day and night. Now, he’s being tortured and beaten. Frankly, I’m not surprised that men are treated like animals in a society that has embraced the evolutionary nonsense that men are merely no better than brute beasts rather than those who are made in the image of God. However, I am sickened to see it for myself, even for those who have been convicted. This is not justice. It is an inhumane cruelty.

On top of that, all of this that these men are enduring seem to be a clear violation of both the Fifth and Sixth Amendments of the US Constitution, which read:

In all criminal prosecutions, the accused shall enjoy the right to a speedy and public trial, by an impartial jury of the State and district wherein the crime shall have been committed, which district shall have been previously ascertained by law, and to be informed of the nature and cause of the accusation; to be confronted with the witnesses against him; to have compulsory process for obtaining witnesses in his favor, and to have the Assistance of Counsel for his defence.

They have been deprived of liberty and their life to some extent by sitting in this prison for profit for more than a year waiting on a “speedy and public trial.”

Both of Bundy’s shoulders were dislocated and he was forced to put them back in place on his own, according to his own testimony. He was then put in isolation with shackles on his bloody ankles.

Deb Jordan was able to visit with Ammon following the ordeal.

“He is painfully thin,” she wrote. “He told me that they beat him up pretty good, was sore, but was starting to gain back a little strength — He was able to raise his arms and move them about so he was gaining back a little mobility. His voice trembled sometimes and he spoke very softly .. I could tell he had a little trouble concentrating at times but otherwise he was alert and aware of his surroundings .. He was a bit pale but had color in his cheeks ..”

“While we were speaking they brought him his dinner and he was eatin,” she added. “I observed he had a small cut [not deep] on his wrist from the handcuffs and there was no bruising on his face or arms above his wrist that I could see. He is very weak and it is apparent he went through some major trauma not only physically but mentally.”

She asked for prayers for her husband and the family.

Supporters gathered outside the facility, which I was at to meet with Pete Santilli in January, and made calls to the sheriff in protest.

On Monday, Guerilla Media Network’s Deb Jordan informed followers on Facebook that the guard who targeted Ammon was sent home the next day and has not returned.

While that is good, the pressure should be maintained on the facility and the administration of that facility to ensure this guard never returns and that these men are kept safe.

In that vein, a petition for redress of grievance regarding the abuses at the Nevada Southern Detention Center has been set up and I encourage you to support the petition. As of the writing of this article, there are just under 500 signatures. I’ve put my name on it, will you do the same? Click here to sign the petition.