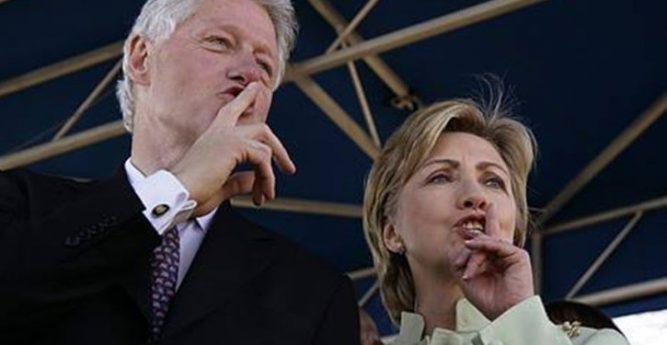 On Tuesday, Donald Trump sent waves through the political community when he made the decision to fire FBI director James Comey. While the media went on to compare Trump to Richard Nixon over the incident, and #Nixonian was trending Tuesday night, Nixon never fired his FBI director. In fact, only one president in the history of the US has done this before and that was Bill Clinton.

In 1993, President Clinton ousted William Sessions as FBI director after Sessions refused to voluntarily step down amid ethical concerns. Sessions, who was appointed by Ronald Reagan, had been under investigation over an alleged tax scheme.

When asked to resign by Clinton, Sessions refused and so Clinton fired him.

In 1993, the LA Times wrote: “The Justice Department report found, among other things, that Sessions had engaged in a sham transaction to avoid paying taxes on his use of an FBI limousine to take him to and from work, that he had billed the government for a security fence around his home that provided no security and that he had arranged business trips to places where he could meet with relatives.”

Sessions was never found guilty of a crime.

What makes Clinton’s firing of Sessions particularly interesting is the fact that Vince Foster was found dead the very next day. While it was most likely a coincidence, its significance proved to be quite the advantage for the Clintons.

Foster committed suicide on July 20, 1993, in Ft. Marcy Park along the Potomac River by placing a .38 caliber revolver in his mouth and pulling the trigger.

Although the suspicious deaths surrounding the Clintons over the years have been largely dismissed as conspiracy theory, many of them, at the very least, deserve scrutiny rather than eye rolls. Vince Foster is one those cases.

Ronald Kessler, formerly an investigative reporter with the Wall Street Journal and the Washington Post, and the author of “The First Family Detail: Secret Service Agents Reveal the Hidden Lives of the Presidents and The Secrets of the FBI,” came out last year with a damning claim.

According to Kessler, “FBI agents investigating the death of Bill Clinton’s Deputy White House Counsel found that Hillary Clinton ‘triggered’ his suicide when she attacked and humiliated her mentor from their former Rose Law Firm in front of other White House aides a week before he took his own life.”

What’s more, according to Kessler, when he went back last year to retrieve the documents describing Hillary Clinton’s role in the death of Foster — they vanished.

According to Kessler’s account, which albeit remains unverified, a box of documents provided upon his second visit to the Archives contained all relevant information from the FBI and other investigators — but was absent “reports on Hillary Clinton’s role” in the suicide of Vince Foster.

A Freedom of Information Act request filed by Kessler produced no results, despite a more thorough search performed by a senior archivist — including files not released through previous FOIA requests. National Archives public liaison, Martha Murphy, explained in an email to the journalist,

“We did not limit ourselves to interviews made by the two individuals [FBI agents] you mention.”

As Claire Bernish pointed out last year, because no documentation was made available by Kessler or the Daily Mail, verifying the accuracy of his FOIA request pursuant to obtaining the documents in question is impossible. However, no plausible reason to doubt his account exists, either — and Kessler has been investigating the Foster suicide for some time, writing several articles about pertinent open questions relating to the Clintons’ role before and after the death.

After then-FBI director Sessions had been fired, Kenneth Star was named as head of the investigation of Foster’s death.

Starr conducted an exhaustive probe into the circumstances surrounding Foster’s suicide — but, as Kessler notes, inexplicably chose to omit from his 38,000-word report the information about Hillary’s public berating and humiliation of the longtime Clinton associate.

Amazingly enough, after being the cause for Clinton’s impeachment after finding that that Clinton had committed perjury in sworn testimony denying having had “sexual relations” with Ms. Lewinsky, Starr now praises the family.

Last year, while speaking at the National Constitution Center in Philadelphia, Starr went on a rant essentially exonerating the man who decades prior he tried to bury.

He called Mr. Clinton “the most gifted politician of the baby boomer generation.”

“His genuine empathy for human beings is absolutely clear,” Mr. Starr said. “It is powerful, it is palpable, and the folks of Arkansas really understood that about him — that he genuinely cared. The ‘I feel your pain’ is absolutely genuine.”