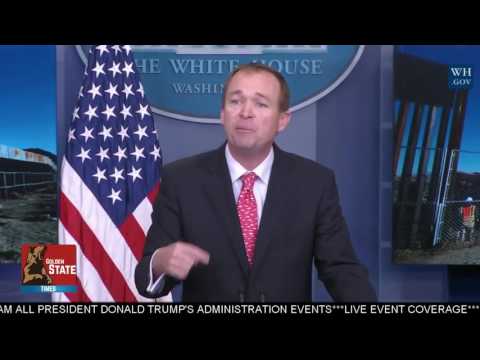 Don’t believe what the MSM tells you.

In the video below, Mick Mulvaney deftly and lucidly explains the budget deal that was recently approved by Congress. As the director of the Office of Management and Budget (OMB), Mulvaney certainly would know the budget deal better than any so-called journalist.

Beginning at the 8:37 mark, Mulvaney says:

“We are building this [the US-Mexico border wall] now. There is money in this deal to build several hundreds of millions of dollars of this [solid metal fence] to replace this [wire fence]. That’s what we got in this deal and that’s what the Democrats don’t want you to know. This stuff is going up now. Why? Because the president wants to make the country more safe. This [pointing to a wire fence] doesn’t stop drugs and doesn’t stop criminals from crossing the border.”

Mick Mulvaney was elected to the U.S. House of Representatives in 2011 — the first Republican since 1883 to represent South Carolina’s 5th congressional district where he served until President Trump nominated him, and the Senate confirmed him, to be Director of the Office of Management and Budget (OMB).