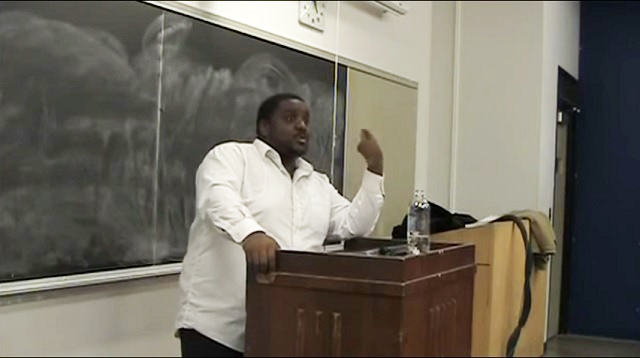 In a recently uncovered interview from 2012, titled “Dr. Tommy Curry on killing whites,” Curry said many black people like Nat Turner and Robert F. Williams “thought about killing white people as self-defense” and this “tradition” is still very “relevant.”

“When we have this conversation about violence, or killing white people, it has to be looked at in the context of historical turn,” he says. “And the fact that we’ve had no one address, like how relevant and how solidified this kind of tradition is, for black people saying look, in order to be equal, in order to be liberated, some white people may have to die.”

Curry made other similar disturbing comments which were highlighted by The American Conservative.

Texas A&M President Young did not directly name Curry in his statement, but said he found comments “by one of our professors” to be “disturbing” and “in stark contrast to Aggie core values.”

What he did not do was say Curry would be fired. Instead, he said: “As we know, the First Amendment of the U.S. Constitution protects the rights of others to offer their personal views, no matter how reprehensible those views may be.”

The following statement was released Wednesday evening from President Young:

I am writing you tonight with a message that may seem ill-timed given our wonderful graduation ceremonies taking place this week. At the same time, this is a message about Aggies and that for which we stand. As such, I cannot think of a more appropriate time in many ways to write to you in this regard.

As you may know, a podcast interview by one of our professors that took place approximately four and a half years ago resurfaced this week on social media, seen for the first time by many of us. The interview features disturbing comments about race and violence that stand in stark contrast to Aggie core values most notably those of respect, excellence, leadership and integrity values that we hold true toward all of humanity.

As we know, the First Amendment of the U.S. Constitution protects the rights of others to offer their personal views, no matter how reprehensible those views may be. It also protects our right to freedom of speech which I am exercising now.

We stand for equality.

We stand against the advocacy of violence, hate, and killing.

We firmly commit to the success, not the destruction, of each other.

We wish no violence or harm even to those who espouse hateful views under the First Amendment, a sentiment that by its very nature is one that they would deny others.

Tonight, therefore, I write to you, our beloved Aggies. Our core values are very much intact, including those for which we stand, and in contrast to that for which we most assuredly do not. This is something that needs to be said here and now and lived in all of our days.

I can’t imagine if a white professor was found searching for justifications to kill black people in “self-defense” the school would be sitting around reminding people of the existence of the First Amendment, which is not the issue here.

If your “core values” are standing “against the advocacy of violence, hate, and killing,” then you need to fire Professor Curry immediately, apologize for having hired him in the first place, and perform an audit to see which other professors on your staff hold similar views.