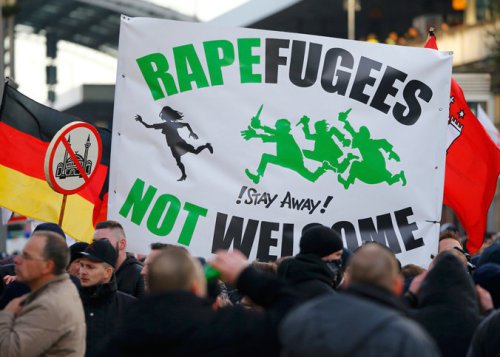 Germany is reaping the harvest of multiculturalism: moral relativism.

A female judge in Brandenburg, one of the 16 federated states of Germany, acquitted a Muslim man of raping a non-consenting woman for four hours, on the grounds that according to the defendant’s Turkish culture, it was not rape, but merely “wild sex”.

According to a Google Translation of Jürgen Lauterbach’s report, “Sex mit Gewalt, aber keine Vergewaltigung (Sex with violence, but no rape),” for the April 20, 2017 edition of the German-language Brandenburg daily newspaper Märkische Allgemeine, on the night of August 18, 2016, the victim — a young woman from the town of Plaue in central Germany — went to the 23-year-old defendant’s apartment in downtown Potsdam, the capital of Brandenburg, to buy drugs.

After the man and woman took the drug methamphetamine or speed, the defendant indicated he wanted to have sex with the woman. The woman testified in court that she refused, saying that he was “not her type”.

The defendant then dragged the woman by her arm, “threw her on the bed” and pushed her head between the metal bars of the headboard. The woman cried “stop!” and resisted the man by scratching him on his back. But she told the court that “at some point,” she “gave up”.

The man “entered her” several times. The whole ordeal ended after four hours when the man received a phone call and “suddenly had to leave”. The woman was so disabled by the “violent sex” that she “could not run properly for the next two weeks”.

Saying that “I believe [defendant] Mrs. G’s every word” — that the woman did not give her consent to the defendant who had “taken her by force” — the judge nevertheless acquitted the defendant of rape because she believed the accused when he said the wild sex was amicable, and that he “probably did not know what he was doing to her”.

In court, the decisive question that determined the judge’s ruling was asked of the victim: “Could it be that the defendant thought you agreed to the sex?”

The victim replied that it could be because, given “the mentality” of the defendant’s “Turkish culture,” she could not tell whether he viewed the rape that she was experiencing to be rape, or whether he saw it as just “wild sex”.

The defendant had denied from the beginning that he raped the woman, insisting that he would not do such a thing since he himself has a mother and a sister.

And so the judge ruled that no conviction is possible because the prosecution had not demonstrated an intention to rape.

Reporter Jürgen Lauterbach points out that a study in 2014 by the Criminological Research Institute of Lower Saxony found that German courts have convicted only 8.4% of rape cases.