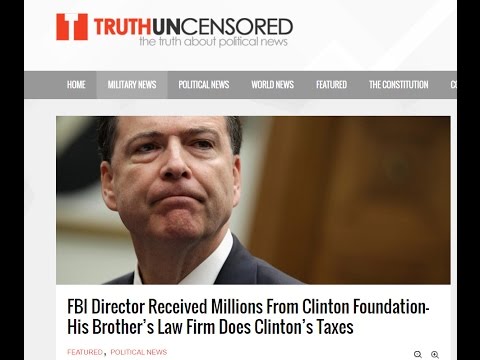 In September 2016, I reported on the fact that former FBI Director James Comey pocketed $6 million from Lockheed Martin, which is a Clinton Foundation donor, and became a donor in the same year Comey received those funds. Comey became a board member, a director, and a Financial System Vulnerabilities Committee member of the London bank HSBC Holdings in 2013. HSBC has also partnered with The Clinton Foundation, where records indicate that the bank projected $1 billion in financing through the Clinton Foundation for “retrofitting” 1,500 to 2,000 housing units to conserve energy. In that same report, I mentioned that his brother, Peter Comey, served as “Senior Director of Real Estate Operations for the Americas” for DLA Piper. DLA Piper was not only one of Hillary Clinton’s largest campaign donors, but also audited the taxes for the Clinton Foundation.

The Washington Examiner reports on the tax filings of the Clinton Foundation:

An examination of the charity’s tax forms by reporters earlier this year prompted Clinton Foundation officials to undertake an “exhaustive review” of past returns, which uncovered “several additional errors,” according to foundation president Donna Shalala.

The amended tax form from 2010 included $8.8 million in government grants that was not previously listed.

Overall, the refiled tax returns revealed $20.1 million in government grants that were kept off the original versions of the forms.

The Clinton Foundation audit was performed by DLA Piper, a major donor to the same charity whose tax forms it examined.

Other aspects of the tax returns were quietly updated to reflect additional, undisclosed contributions.

For example, the new 2011 return revealed $10 million in additional revenue that the Clinton Foundation did not originally report.

Contributions to the Clinton Foundation spiked last year as Hillary Clinton prepared to launch her campaign for president. The charity raked in $20 million more in donations last year than in 2013.

Comey is knee deep in the corruption of the Clintons. From profiting millions from foundation ties to his brother’s ties to the auditing of the foundation, there is not doubt that the reason Comey never encouraged bringing charges against Hillary Clinton was because of these things and more.

Property records show that James Comey owns the mortgage on his brother Peter Comey’s house in Virginia. Therefore, James Comey had a direct financial relationship with a DLA Piper executive at the time he was investigating Clinton.

These relationships, though egregious, are symptomatic of the brazen culture of crony capitalism that exists in our nation’s capital. The public usually is prevented from learning these kinds of things, with the mainstream media blocking information from coming out. Sunlight is the only remedy.

When President Donald Trump finally fired James Comey as FBI director, Tucker Carlson said that everyone in Washington knows it was well past due.

While Democrats are screaming about the firing of James Comey, the reality is that he is simply a corrupt man and incapable of doing the job in DC. In fact, I actually agree with former Texas congressman Ron Paul, who recently questioned the need for the FBI.

“What is the purpose of the FBI? And are they fulfilling a purpose?” Dr. Paul rhetorically asked. The Washington Standard reports:

Dr. Paul explains the spin machine keeps Comey’s firing in the headlines, with politicians contributing significantly in plastering the incident — rather than aggressive and belligerent actions by the U.S. military — nonstop across headlines. Indeed, the same politicians now feigning disgust with Trump’s dismissal of the FBI chief, just one month ago would have seen Comey’s head on a figurative platter.

That hypocrisy and the resultant untenable anger on display merits a closer look at whether the controversial spy organization has outlived any benefit to the public, if in fact, there ever was one.

Discussing the State’s propaganda machine, Dr. Paul emphasizes that what’s typically termed ‘spin’ in actuality, “it’s mostly flat-out lying — when they lie us into war,” as has been the case in Syria and a lengthy list of other zones of conflict with U.S. military involvement.

“It isn’t just modification in tone,” he continues, “it literally is deceiving the people. And this doesn’t mean that what’s happening at the FBI isn’t serious, but I also think this whole process brings up the subject, ‘How important is the FBI?’

“I mean, it is powerful. And we know this is just one-hundred-and-some years old, and was started during Teddy Roosevelt’s term in office — which is no surprise — and they don’t have a very good record.”

It was the era of J. Edgar Hoover — a man who held the position for nearly five years, Comey has been forced to leave — when the collection of data became an obsession of the FBI. Hoover’s bureau possessed “data on everybody,” and frequently used that as a form of political “blackmail,” Paul notes, adding, “in many ways, Hoover was a disgrace, but that sentiment has continued, and still exists in the FBI.”

So, as more corruption is exposed in James Comey and his firing was definitely warranted, I agree with Dr. Paul that we shouldn’t stop with Comey, but eliminate the entire FBI.

“You know, the founders warned against a standing army,” Dr. Paul affirms, “and I think … we have the standing army. We have the nationalization of the police force. And the FBI has thirty-five thousand in their ‘army.

“But that is even small when you look up everything else under the Department of Homeland Security. I mean, we are an armed State against the People. There are probably more people patrolling our streets from the Federal Government than the horrible mess we’re doing overseas.”

Dr. Paul asks, “And what do they do? We end up losing. We’re supposed to be fighting and getting involved to protect our Constitution and our liberties.”