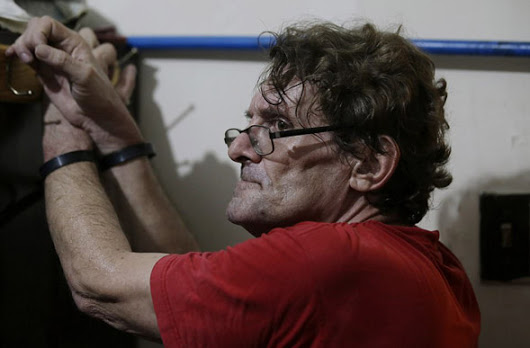 David Timothy Deakin, originally from Peoria, Illinois, was arrested in April after police raided his home in the Philippines, where he has been living for the past 17 years.

The Philippines National Bureau of Investigation discovered children’s underwear, cameras, bondage cuffs, and fetish ropes in his two-bedroom townhouse. Additionally, they discovered 30 hard drives and several computers, which are being reviewed to find suspected buyers and victims.

“Why is everyone asking about children coming into my house?” said Deakin with his wrists bound with a zip tie.

Authorities are reviewing about 30 hard drives, as well as numerous computers, to find suspected buyers and victims.

In his computer files, videos and images of children engaged in sex acts were allegedly found.

Deakin has been charged with cybercrime, child pornography, child abuse and child trafficking.

Dekin is suspected of abusing Filipino children and providing pedophilia networks around the world with vile content.

Apparently, the Philippines is not only becoming known for transgenderism, but is also growing in webcam child abuse.

Deakin’s arrest April 20 reveals one of the darkest corners of the internet, where pedophiles in the U.S., Canada, Europe and Australia pay facilitators on the other side of the world to sexually abuse children, even babies, directing their moves through online livestreaming services.

The relatively new crime of webcam sex tourism is spreading rapidly, with new digital technologies sparking what the United Nations calls an “alarming growth of new forms of child sexual exploitation online.” The FBI says it’s epidemic, and that at any given moment, 750,000 child predators are online.

Almost every case stems from the Philippines, where good English speakers, increased internet connections and widespread international cash transfer systems combine with widespread poverty and easy access to vulnerable kids. There have been as many as three busts a week there this spring. The youngest victim ever, rescued a few weeks ago, was an infant, two months old. Most are under 12.

Deakin has been charged with cybercrime, child pornography, child abuse and child trafficking.