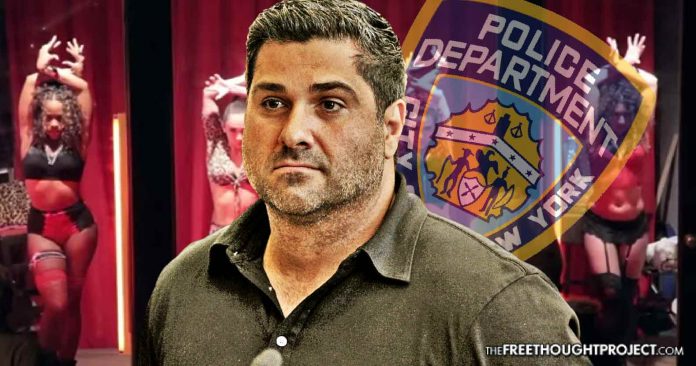 New York, NY — There are only eight counties in the United States where prostitution is legal, all in Nevada. But that didn’t stop one retired police officer, who was drawing disability and receiving a pension, from starting up his own escort service, raking in millions of dollars in the process.

Unfortunately for Michael Rizzi (45), his fellow law enforcement officers found out about it and put a stop to it. Rizzi was arrested last year when it was discovered he operated 58 escort service websites.

The Department of Homeland Security investigated Rizzi and arrested him at his Brooklyn home in May of 2016. He was tried, convicted, and sentenced to 14 months in prison for money laundering.

After he serves his time, the dirty ex-cop will spend four months in home confinement and two years probation. He forfeited over $120,000 in cash as well as his Florida vacation home.

Reportedly, Rizzi raked in millions upon millions of dollars and laundered the money through a vast system of shell corporations connected to organized crime. DHS can hardly be pleased with only recovering a little over one hundred thousand dollars. All of which begs the question, “Where’s the rest of the money?”

Also concerning to some was the fact the former police officer wasn’t charged with running an illegal prostitution ring. His lawyer reportedly defended his client’s actions saying the only business with which he was engaged was an escort service and the women knew there were not obligated to perform sexual favors for clients.

Rizzi’s business was called BJM Manhatten Stakes and Entertainment and directed interested Johns to call booking agents to set up the dates with high paid escorts earning as little as $600 per hour with one reportedly bringing in $25,000 in one 24 hour period.

Judge Carol Amon presided over the criminal case and ordered his assets seized, which included the websites as well. U.S. Attorney Bridget Rhode reflected on the life of the former law enforcement officer.

“Michael Rizzi left behind a life of law enforcement for a new career in which he flagrantly disregarded the law and exploited others for his own enrichment…This office is committed to dismantling money laundering organizations, including those which promote and capitalize on illegal prostitution.”

If it’s true Mr. Rizzi took in millions; then the Feds walked away with very little to show for their investigative efforts. Web sites can be replaced, as well as the home and the chump change confiscated.

But those who are caught up in human trafficking, who may have unwillingly worked for Rizzi at one time or another, may be the real victims in the former law enforcement officer’s shady schemes.

For those who want to go down the rabbit hole into conspiracy theories, one could ask the question why the Feds chose not to investigate the prostitution ring, and its connections to wealthy clients, such as politicians, billionaires, etc.

After all, in the very beginning, the Feds made it clear they were only concerned with the money laundering, a crime for which the federal government receives no revenue. Homeland Security Investigations Assistant in Charge Steven Schrank said, “At the end of the day, we’re focused on the money laundering and organized crime connections to this investigation.”

Absent from his concerns were any mention of the human assets who, one could say, were trafficked from John to John, whether or not they did so willingly or not.

Maybe the answer to the question of why the Feds chose to go after the money instead of The Who’s Who of clients comes from Rizzi’s own admission. He reportedly bragged, “I’m number one for a reason…I get the most business, my girls make the most money, my clients are the wealthiest people in the world.”

In the Land of the Free, it is against the law to get paid to have sex, unless that sex is filmed, distributed on DVD, and taxed. One of the least talked about systems of oppression in the US is that of persecuting prostitutes.

When referencing prostitution, we are talking about the mutually beneficial exchange of sexual favors for money by two or more consenting partners; not forced human trafficking.

It’s called the “oldest profession in the world” for a reason. Sex is a basic human need. One need only observe the explosive population growth of humans in the last 10,000 years to see that desire to mate is inherent in each and everyone one of us.

When one takes this into consideration, the notion of outlawing consensual sex is seen for what it is, sheer insanity.

Because the demand for sex is pushed into dark alleys and late night street corners, a woman working in the sex trade becomes far more vulnerable than if they were legally allowed to operate out of brick and mortar setups. This danger of working on the street drives the need for protection from pimps who are often more abusive than any customer would be.

Despite the tens of thousands of arrests each year, the market has found a way to provide the service of sex using safer solutions. In spite of the laws, sellers of sex have found ways to safely conduct business by setting up “massage” parlors, using phone books, and, of course, the internet — like Rizzi.

Besides being an immoral gang of thieves, the state is also relentless. They have deep pockets of extorted tax dollars of which to dig in to enforce their distorted will on the people.

Despite prostitution arrests dropping from 2001 to 2010, the cost of arresting people for sex remains staggeringly high. Individual cities continue to spend up to $23 million a year stopping people from having voluntary sex.

Meanwhile, involuntary sex goes uninvestigated at an alarming rate. Hundreds of thousands of rape kits are sitting in police departments across the country — collecting dust, as cops petition the government to allow them to have sex with prostitutes so they can then bust them.

In police state USA, truth is stranger than fiction.