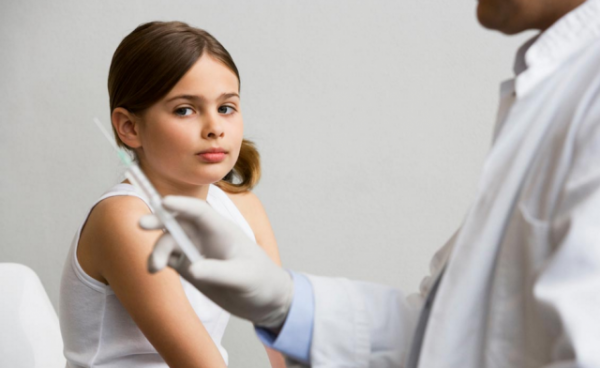 In recent years, the glaring spotlight of skepticism has been turned to the topic of vaccines, bitterly dividing parents and giving doctors of modern medicine conniption fits — but no matter where you stand on vaccinations, the fact two groundbreaking, scientific, peer-reviewed studies painting inoculations in not-so favorable light have vanished from the Internet is cause for concern.

Originally, the study, titled, “Pilot comparative study on the health of vaccinated and unvaccinated 6- to 12- year old U.S. children,” was published in Open Access Text.

Until, that is, Open Access Text removed it and a second, similar study by the same authors from their archives without explanation. In fact, The Free Thought Project attempted to contact Open Access Text on multiple occasions for an explanation on the abrupt decision to pull the studies — but, as of publishing, had yet to receive a response.

Lead author Anthony R. Mawson, Professor of Epidemiology and Biostatistics at Jackson State University’s School of Public Health, establishes that his team takes no issue with vaccinations, in their own right, stating in the study’s introduction,

“Vaccines are among the greatest achievements of biomedical science and one of the most effective public health interventions of the 20th century. Among U.S. children born between 1995 and 2013, vaccination is estimated to have prevented 322 million illnesses, 21 million hospitalizations and 732,000 premature deaths, with overall cost savings of $1.38 trillion. About 95% of U.S. children of kindergarten age receive all of the recommended vaccines as a requirement for school and daycare attendance, aimed at preventing the occurrence and spread of targeted infectious diseases. Advances in biotechnology are contributing to the development of new vaccines for widespread use.”

Mawson responded by email to The Free Thought Project’s request for a comment concerning the studies’ abrupt disappearance, stating only,

“I am forwarding your inquiry to our funding agency for comment. I am not at liberty to provide details at this moment.”

Although that sheds no light on the motivation for OAT to pull the study, it provides added evidence studies running counter to the long-held assumption vaccinations should not be questioned are far more frequently so explosive, the ensuing controversy and rush by modern medicine — often backed by the pharmaceutical industry — to denigrate such results is powerful and swift.

“Under the currently recommended pediatric vaccination schedule, U.S. children receive up to 48 doses of vaccines for 14 diseases from birth to age six years, a figure that has steadily increased since the 1950s, most notably since the Vaccines for Children program was created in 1994. The Vaccines for Children program began with vaccines targeting nine diseases: diphtheria, tetanus, pertussis, polio, Haemophilus influenzae type b disease, hepatitis B, measles, mumps, and rubella. Between 1995 and 2013, new vaccines against five other diseases were added for children age 6 and under: varicella, hepatitis A, pneumococcal disease, influenza, and rotavirus vaccine.”

Mawson and his team of researchers included nine charts and a full 71 references in their comparison of the long-term health prospects between vaccinated children attending public schools and their unvaccinated, homeschooled peers, to determine what results from the current scheduling of vaccines that could, perhaps, be overlooked under the general assumption of vaccine safety.

“Assessment of the long-term effects of the vaccination schedule on morbidity and mortality has been limited,” the study stated, with paragraphs artificially inserted for clarity. “In this pilot study of vaccinated and unvaccinated homeschool children, reduced odds of chickenpox and whooping cough were found among the vaccinated, as expected, but unexpectedly increased odds were found for many other physician-diagnosed conditions.

“Although the cross-sectional design of the study limits causal interpretation, the strength and consistency of the findings, the apparent ‘dose-response’ relationship between vaccination status and several forms of chronic illness, and the significant association between vaccination and NDDs [Neurodevelopmental disorders] all support the possibility that some aspect of the current vaccination program could be contributing to risks of childhood morbidity.

“In addition, preterm birth coupled with vaccination was associated with an apparent synergistic increase in the odds of NDD above that of vaccination alone. Nevertheless, the study findings should be interpreted with caution.

“First, additional research is needed to replicate the findings in studies with larger samples and stronger research designs. Second, subject to replication, potentially detrimental factors associated with the vaccination schedule should be identified and addressed and underlying mechanisms better understood. Such studies are essential in order to optimize the impact of vaccination of children’s health.”

“Although short-term immunologic and safety testing is performed on vaccines prior to their approval by the U.S. Food and Drug Administration, the long-term effects of individual vaccines and of the vaccination program itself remain unknown. Vaccines are acknowledged to carry risks of severe acute and chronic adverse effects, such as neurological complications and even death, but such risks are considered so rare that the vaccination program is believed to be safe and effective for virtually all children.”

Children receiving only part of the full vaccination schedule had a mixed resultant development of these afflictions.

“Vaccination was strongly associated with both otitis media and pneumonia, which are among the most common complications of measles infection. The odds of otitis media were almost fourfold higher among the vaccinated (OR 3.8, 95% CI: 2.1, 6.6) and the odds of myringotomy with tube placement were eight-fold higher than those of unvaccinated children (OR 8.0, 95% CI: 1.0, 66.1). Acute otitis media (AOM) is a very frequent childhood infection, accounting for up to 30 million physician visits each year in the U.S., and the most common reason for prescribing antibiotics for children. The incidence of AOM peaks at ages 3 to 18 months and 80% of children have experienced at least one episode by 3 years of age. Rates of AOM have increased in recent decades. Worldwide, the incidence of AOM is 10.9%, with 709 million cases each year, 51% occurring in children under 5 years of age. Pediatric AOM is a significant concern in terms of healthcare utilization in the U.S., accounting for $2.88 billion in annual health care costs […]

Obviously, these results were unexpected — and call to task the increased number of vaccines highly recommended, and in some instances required, by the medical community.

Cancer, depression, and a host of other ailments and afflictions were not found to have a significant difference in vaccinated versus unvaccinated populations. Mawson continues:

“A possible contributory role for vaccines in the rise in NDD diagnoses remains unknown because data on the health outcomes of vaccinated and unvaccinated children are lacking. The need for such studies is suggested by the fact that the Vaccine Injury Compensation Program has paid $3.2 billion in compensation for vaccine injury since its creation in 1986.

“A study of claims compensated by the Vaccine Injury Compensation Program for vaccine-induced encephalopathy and seizure disorder found 83 claims that were acknowledged as being due to brain damage. In all cases it was noted by the Court of Federal Claims, or indicated in settlement agreements, that the children had autism or ASD. On the other hand, numerous epidemiological studies have found no association between receipt of selected vaccines (in particular the combined measles, mumps, and rubella vaccine) and autism, and there is no accepted mechanism by which vaccines could induce autism.”

While the Mawson study immediately found detractors — many of whom questioned the results and method of inquiry — the preceding paragraph shows the researchers not glibly intent to prove vaccinations responsible for the astronomical rise in diagnoses of autism. This was not intent to prove the movie Vaxxed correct.

In fact, while the most common concern and complaint among those who question whether or not their children should receive so many vaccines surrounds possible connections to autism spectrum disorder, the author clearly states any correlation or link has not been substantiated.

Incidentally, this isn’t the first time this study has been pulled from the Internet: the same thing happened last year, under similar circumstances — i.e., furious backlash on methodology and sampling — but, notably, not for the results. While detractors could indeed dissect some flaws in the Mawson team’s analysis, the astonishing differences between the inoculated and unvaccinated populations should at minimum prove resoundingly the imperative for further study.

Vaccinations, as Mawon clearly states, have performed miracles by eliminating some of the most pernicious diseases and afflictions humans have faced — but the categorical increase in the number of vaccines physicians recommend, coupled with the dearth in studies of potential reactions among them, make the oblivious rush to inoculate children and adolescents against as many as possible seems foolhardy, at best.

Vaccinating children remains the guardianship decision of parents, but truly informed consent only comes with comprehensive research, evaluation, and study of every conceivable outcome — both positive and negative.

These substances cannot be removed from a human body once injected. Deciding whether to fully or partially vaccinate — or to abstain, altogether — should not be blindly undertaken because the majority of the medical community deems it so.

Science has brought innovation, advancement, and betterment of health unimaginable a century or two ago — but science isn’t perfect. It was science, after all, which once deemed the Earth a flat disc, around which the Universe spun.

Yes, we should indeed turn to those with greater knowledge and education on a subject than ourselves to make an informed decision on any medical procedure — but it would behoove us all to understand new information can dramatically change the field of medicine.

With that in mind — and with the deletion of yet another controversial study questioning the dominant vaccine paradigm — the choice to vaccinate your children is yours.

Following are charts from the Mawson study, captured prior to its deletion from Open Access Text: 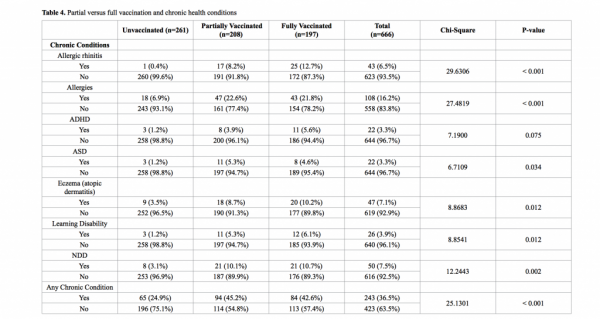 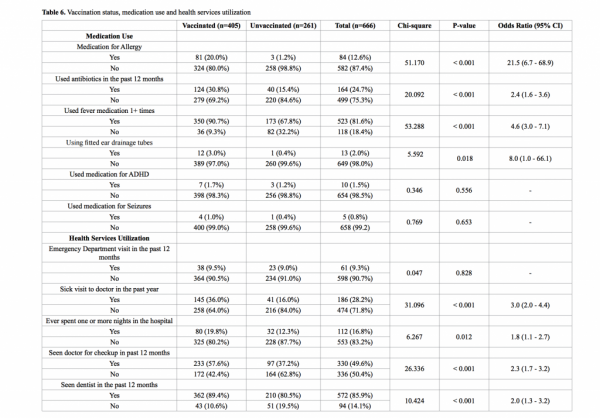 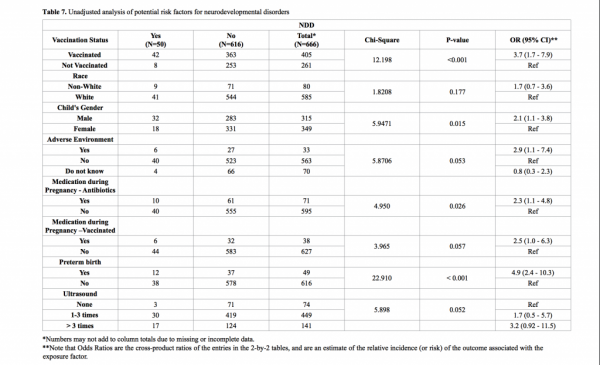 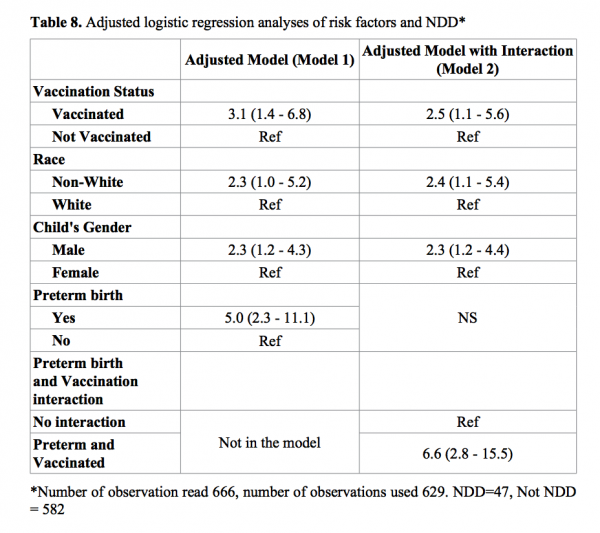