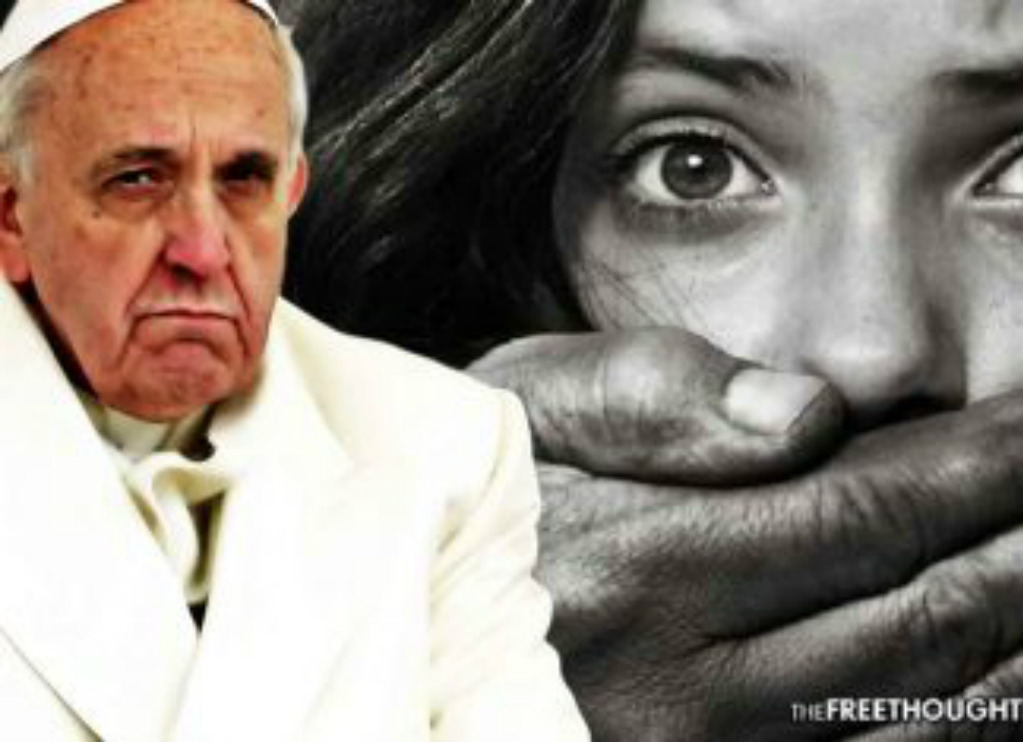 Have you ever asked yourself why it has been decades now since the Catholic church has had any high-profile sex scandals involving pedophile priests? Apparently, it’s because they’re doing their best to keep it quiet, at least until now.

According to FoxNews, “Pope Francis acknowledged Saturday that the Vatican has a 2,000-case backlog in processing clerical sex abuse cases and says criticism of the slow pace was justified. But he says more staff are being added and insists the Vatican is ‘on the right path.’”

For victims of the alleged abuse, “on the right path” probably translates into, “we’re doing nothing about it.” For the Catholic Church, arguably the largest religious organization on the planet, to know about 2,000 cases of alleged pedophilia in its ranks, and to be doing nothing about it, may be as egregious as the heinous acts themselves.

The renewed pressure on the Catholic Church, and specifically the Vatican, stems from the resignation of Marie Collins, an Irish pedophile-priest-sex-abuse-survivor who resigned in March from Pope Francis’ sex abuse advisory commission.

Collins said she quit because her commission, formulated to root out pedophile priests was being met with, in her words, “unacceptable” levels of resistance from the Vatican. In other words, they were ignoring the recommendations set forth by the investigative and reform group.

Speaking with reporters on his plane, Francis said of Collins, she’s “a great woman” and was “a bit right” about her criticisms. “Marie Collins was right on that point. But we are on the right path, as there were 2,000 cases backlogged,” he said.

Did you catch that? There are at least 2,000 more cases, assumed to be previously absent from the high-profile now decades-old scandals of the 80’s and 90’s.

Francis didn’t respond to the other issues raised by Collins, including the refusal of the Congregation for the Doctrine of the Faith — which handles abuse cases — to create a tribunal to judge bishops who covered up for pedophile priests. Instead, he focused on explaining why cases can take so long to process… He won praise for having created the advisory commission and for promising “zero tolerance” for abuse. But his advisory board has lost credibility following Collins’ departure and its failure to implement key recommendations that even Francis had approved.

It’s safe to say, with the departure of one of the leading figures comprising the advisory board, that the Catholic church is stalling. Instead of taking down the pedophiles, and turning them over to authorities for prosecution, they’re simply content on maintaining a 2,000 case backlog.

The church’s inaction on pedophilia may signal to some critics as well as survivors of pedophile priest abuses, that the emotional development of its children is of little concern to the church, who some have said are protecting pedophiles instead of rooting them out from among their ranks.

It’s unclear if the latest revelations that the church is still doing nothing will further drive Catholic Church members into Evangelical abuse and Protestant churches, but in our opinion, doing nothing about the backlog is just as bad as pedophilia itself.

As the Free Thought Project previously reported, this scandal has long affected the Catholic church. In 2014, Pope Francis admitted that “about two percent” or 1 in 50 Roman Catholic priests are pedophiles. He then promised solutions to the history of the church essentially condoning the horrid practice. However, it appears that his solution is to sweep it under the rug.

According to a report out of the AP, Pope Francis has quietly reduced sanctions against a handful of pedophile priests, applying his vision of a merciful church even to its worst offenders in ways that survivors of abuse and the pope’s own advisers question.

One of the child molesting priests given clemency by the Pope was later arrested and sentenced to more than four years in jail for abusing multiple boys aged 12-16. The Rev. Mauro Inzoli is now facing a second church trial after new evidence emerged against him, according to the AP.

Another committee member, psychologist Maria Rita Parsi, added: “If these events continue to be hidden and covered up, to what extent will children be affected?”

One such event that was covered up by the Vatican and the Western media at large was the reverend Gino Flaim, who claimed to “understand pedophilia” and said it’s caused by the child’s attempt to find affection.

After condoning pedophilia and blaming it on the child, this holy man went on to bash homosexuality, calling it a “disease.”

Many canon lawyers and church authorities argue that defrocking pedophiles can put society at greater risk because the church no longer exerts any control over them. They argue that keeping the men in restricted ministry, away from children, at least enables superiors to exert some degree of supervision.

However, as the case of Rev. Mauro Inzoli illustrates, these people need to be locked up.

In November, an Italian criminal judge showed little mercy in convicting Inzoli of abusing five children, aged 12-16, and sentencing him to four years, nine months in prison. The judge said Inzoli had a number of other victims but their cases fell outside the statute of limitations, according to the AP.

With pedophilia scandals rocking the elite right now, is it that surprising to learn that the Pope is attempting to downplay the church’s role in the horrific practice?

As the AP reports, Francis scrapped the commission’s proposed tribunal for bishops who botch abuse cases following legal objections from the congregation. The commission’s other major initiative — a guideline template to help dioceses develop policies to fight abuse and safeguard children — is gathering dust. The Vatican never sent the template to bishops’ conferences, as the commission had sought, or even linked it to its main abuse-resource website.