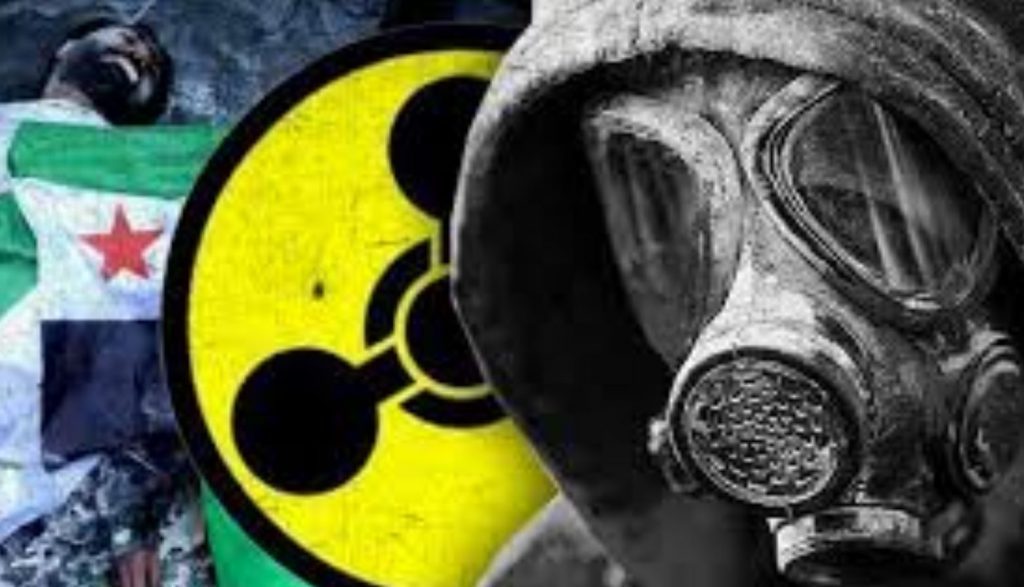 Before the dust settled on Khan Skeykhoun, the United States had used the alleged chemical attack that took place there as the justification for a launch of 59 Tomahawk cruise missiles at the al-Sha’aryat airbase in Syria. Even as the missiles were heading toward their target, it was clear that something was not right with the official U.S. government story regarding the incident. In fact, when considering all the evidence, it was clear that the Syrian military had nothing to do with the actual attack. Even more so, there were even questions regarding whether or not the attack actually took place.

After the bombings, as more and more evidence came to light, it became so obvious that the Syrian government had nothing to do with the attacks that any further reference to Khan Sheykhoun should now conjure up memories of an American empire looking for any reason to launch attacks against Syria, so much so that it is ready to slaughter children under the guise of seeking revenge for the killing of children.

According to a report by Syrian Arab News Agency (SANA),

Terrorist, Walid Hendi confessed to taking part in fabricating videos and photos for a Turkish TV channel while working with the so-called “White Helmets” that depict neighborhoods and areas in Aleppo being attacked with chemical weapons in order to blame the Syrian Arab Army.

The terrorist also confessed to taking part in fabricating videos and photos depicting alleged attacks several times. In confessions broadcast by the Syrian TV on Saturday evening, al-Hendi said that he joined the “White Helmets” three years ago in return for receiving funds from the so-called “local council” and financers from Arab Gulf countries. Hendi said that they were told that there will be chemical attacks, and they were given protective clothing and they staged a fake chemical attack that was filmed by a Turkish channel, adding that they were filmed by two people called Ibrhaim al-Haj and Mohammad al-Sayyed as they sounded sirens and brought stretchers to transport supposedly injured people, with the intent of posting these videos online and accusing the Syrian Arab Army of carrying out a chemical attack.

SANA then reports on the confession of a second terrorist, Imad Abdeljawad. The report reads,

In turn, terrorist, Imad Abdeljawad said in similar confessions that terrorists in Aleppo possessed toxic chemicals and that he took part in transporting them.

Abdeljawad said that he was asked to transport what were claimed to be cleaning agents from al-Sukkari neighborhood to al-Ameriya neighborhood to cover up the fact that they were actually transporting dangerous chemicals, adding that after unloading materials from two cars and starting with the third, they wanted to know what materials they were transporting because their smells were agitating, particularly since he suffered asthma.

He went on to say that he saw people in silvery clothing, protective masks, and long boots transporting the materials to a basement, and they looked through windows and saw them opening barrels and pouring a liquid from them into cylinders, and when the man in charge of the terrorists noticed that Abdeljawad and his cohorts were watching he expelled them and prevented them from bearing arms.

Back in January, army engineering units uncovered, while combing the Old City neighborhoods in Aleppo, an amount of chemical materials of Saudi origin left behind by terrorists, which included sulfur, chlorine, and other materials.

This revelation is particularly important give the possibility for another false flag attack to be repeated in Syria and blamed on the Syrian government by a similar method. In early May, it was reported that the White Helmets were recently moved into Ariha, a town located in Idlib province, accompanied by a number of civilians including children.

In addition, independent Lebanese geopolitical media analyst, Sarah Abdallah, reported that the bodies of 23 children had been stolen from a hospital in Idlib, an act that she believes might also portend a White Helmets false flag attack in the near future. Abdallah’s information has proven accurate time and time again so her revelations are particularly concerning.

The White Helmets have long been exposed for being nothing more than al-Qaeda’s propaganda outfit, most recently having signed a document as a statement of solidarity with al-Qaeda fighters in Barada, Damascus, threatening to withhold drinking water from Syrian civilians unless the Syrian military ends all military operations there.