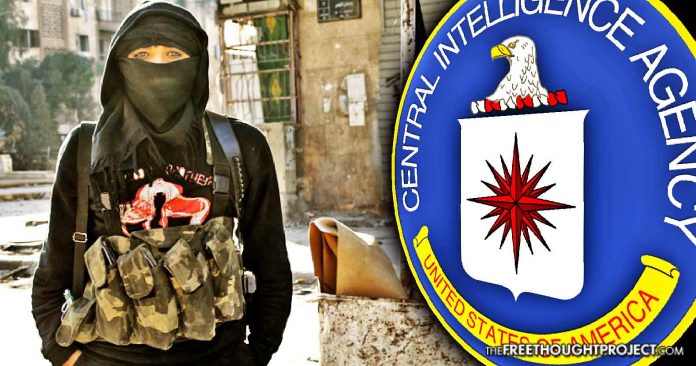 Al-Qaeda — the original Enemy Number One and primary target of the War on Terror — has again received a green light to continue terrorizing civilians, after a transformation in name, alone, allowed its removal from the West’s official list of terrorist groups.

In lockstep with the United States, Canada has now failed to list Hay’at Tahrir al-Sham — the latest manifestation of the constantly morphing terrorist organization — on its list of designated terrorist groups.

Simply put, al-Qaeda militants are no longer deemed ‘terrorists’ by either the U.S. or Canada — despite the group’s unabashed use of the same terrorist tactics which originally garnered the terrorist designation — seemingly only because it changed its name.

Militants now calling themselves Hay’at Tahrir al-Sham, or HTS, are not less terroristic in tactics nor less power-thirsty in agenda than the first manifestations of al-Qaeda the U.S. deemed dangerous enough for Western governments to pin to the top of terror watch lists.

In fact, despite acrimonious contention between them, Tahrir al-Sham and the self-designated Islamic State, or Daesh, share myriad traits, and even leaders, in common — yet only the latter remains atop the terror list in Canada and the U.S.

Granted, the morass in Syria and the Middle East is now so complex even the most astute observers find difficulty tracking what’s actually taking place; but to wipe clean their bloody slate seems perilously imprudent, at best — downright treacherous for the U.S.-led coalition and Syrian civilians, at worst.

Multiple transformations of al-Qaeda have muddied the waters of affiliation — leaving those most affected by the group’s actions previously uncertain how closely its latest manifestation relates to the parent organization.

CBC News reports, in “January of this year, the group shifted again, nominally dissolving itself and joining with four other jihadi groups. It altered its name, changing the word ‘Jabhat’ (Front) to ‘Hay’at’ (Organization), and ‘Fateh’ (Conquest) to ‘Tahrir’ (Liberation).

“The military commander of the group continues to be al-Jawlani, whom the U.S. has branded a Specially Designated Global Terrorist. On Wednesday, the U.S. government posted a $10-million reward for him. The reward notice states that al-Nusra is ‘at the core of HTS,’ which is led by a triumvirate that also includes Egyptian Abu Khayr al-Masri, the number two of the global al-Qaeda organization.”

Canada follows the U.S. in tacitly accepting Tahrir al-Sham has distanced itself from its al-Qaeda roots — a grand departure which could have deadly, lasting repercussions in the region — if only on a putative temporary basis.

“We’re still looking at the extent of the merger and how Hay’at Tahrir al-Sham really functions, but we believe these actions are an al-Qaeda play to bring as much of the Syrian opposition under its operational control as possible, thereby making groups that merge with HTS part of al-Qaeda’s Syria network,” Nicole Thompson of the U.S. State Department told CBC on Monday.

“In that sense, it is not unlike the formation of the Mujahideen Shura Council in Iraq in 2006, which eventually brought the better part of the Iraqi Sunni resistance under al-Qaeda’s control and morphed into the Islamic State of Iraq that same year.”

Yet, again, HTS has yet to be listed by either the United States or Canada as an officially-designated terrorist organization.

“Hay’at Tahrir al-Sham (the Organization for Conquest in the Levant) began life as an expeditionary force called Jabhat al-Nusra (the Support Front), despatched into Syria in 2011 by the leader of al-Qaeda in Iraq, Abu Bakr al-Baghdadi, now ‘caliph’ of the Islamic State (ISIS). Jabhat al-Nusra was led by Syrian jihadist Abu Mohammad al-Jawlani.

“The United States put the group on its terrorist list in 2012, as the Syrian branch of al-Qaeda, and Canada followed suit.

“Al-Baghdadi soon crossed into Syria himself, renouncing his allegiance to al-Qaeda and founding ISIS in April 2013.

“Al-Jawlani’s group remained loyal to the mother organization founded by bin Laden, and Jabhat al-Nusra and ISIS have been at each other’s throats ever since. Meanwhile, the U.S.-led coalition focused its bombing on Islamic State, not al-Nusra.”

That nearly exclusive focus allowed al-Nusra to thrive unhindered — or, at least, to thrive in only the terroristic sense of the term.

Suicide bombings, the brutalization of women and outsiders, and the decimation of ancient monuments aren’t actions undertaken only by the Islamic State — al-Nusra employs all the same tactics — without the stigma and resultant military campaigns so familiar to the former.

Tahrir al-Sham are every bit the equivalent jihadist fighters as the Islamic State — but, with an agenda either loosely matching, or occasionally directly contradicting, the West’s goal of ousting Syrian President Bashar al-Assad.

Whether receiving Western arms or military training, under the auspices of fighting Daesh, factions of al-Nusra and al-Qaeda — along with various other groups and offshoots — are most often described by corporate media and war-hungry politicians as ‘moderate rebels.’

Moderate, however, they are not.

“We accept no one from the Assad regime or of the Free Syrian Army, which is described as moderate,” Jabhat al-Nusra unit commander Abu Al Ezz told German outlet Kölner Stadt-Anzeiger in September from Aleppo. “Our goal is to overthrow the regime, and establish an Islamic state in accordance with the Islamic Sharia.”

Al Ezz added, “Yes, the US supports the opposition [in Syria], but not directly. They support the countries that support us. But we are not yet satisfied with this support.”

Of course, the intricate web of groups fighting in Syria has experienced a number of facelifts in the ensuing time period — but an exercise in extreme caution has lately not been the modus operandi of the West in that regard.

“We are still studying the issue carefully,” Thompson, of the State Department, asserted to CBC, if to the chagrin of nervous readers attempting to understand the Syrian theater’s complexities, “but at this point we would caution any group from joining HTS, as they risk becoming part of an organization we are determined to destroy because of the threat al-Qaeda poses to the United States, to the region, and to other Muslims.

“Nothing we have seen so far changes our concern about the group’s growing capacity for external operations.”

But, as pointed out by CBC, the U.S.’ sharply politicized views of rebel groups have meant an abstention from Canada in characterizing each splinter as on par in terrorist tactics as its parent — confusing the issue tremendously and earning condemnation from Russia and Syria, who aim to destroy the terrorists as a whole, while maintaining Assad’s role.

As Moon of Alabama points out, providing material support or resources to designated Foreign Terrorist Organizations is prohibited under 18 U.S. Code § 2339B. Non-designated groups can be supplied and otherwise supported.

As long as HTS is not designated as terrorist group the CIA, and anyone else, can supply it with weapons and money without using any “Free Syrian Army” cut-outs in-between. The cut-out scheme was used and had well worked when many groups like the Zenki Brigade, then hailed as liberating heroes, delivered the CIA supplies as tribute to Jabhat al-Nusra and ISIS or fought battles on their side. But the number of FSA groups has dwindled. Many closed shop, fled to Europe, or have joined either al-Nusra (in form of HTS) or the competing Ahrar al-Sham terrorist organization. A direct supply line to al-Qaeda is more convenient and will incur less losses along the way.

As long as HTS is not officially designated it will likely continue to have access to CIA delivered TOW anti-tank missiles and other heavy supplies like artillery munition. It will continue to prepare for new attacks on Syrian government forces and Syrian civilians. The Syrian government and its allies must stay alert on the issue and work on additional ways to interrupt any deliveries.

Because al-Qaeda and its affiliates, associates, and offshoots perpetually rebrand themselves to thwart the West, the definitive, publicly-proclaimed agenda of fighting terrorism and terrorists should be considered disingenuous to true goals of regime change in Syria long sought by the U.S.

Instead, University of Ottawa law professor Carissima Mathen — like many other analysts and observers — opined,

“It wouldn’t surprise me at all that because of the shifting nature of these alliances and relationships that western countries’ hands are not entirely clean in terms of their own dealings with these groups at some point in the past.”