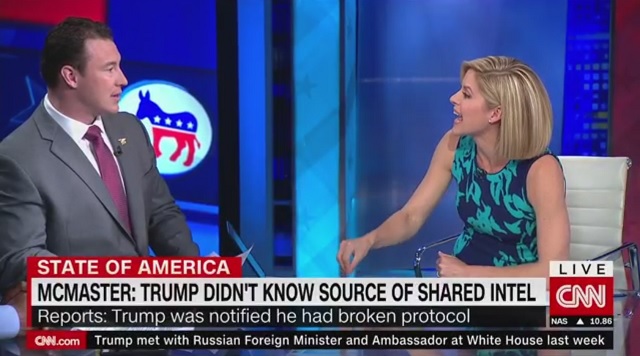 CNN anchor Kate Bolduan had a meltdown on live TV on Tuesday after one of her guests questioned the validity of CNN’s anonymous sources.

Navy SEAL Carl Higbie, a supporter of Donald Trump, said CNN’s “anonymous sources” reporting on last week’s Trump-Russia meeting should come forward and name themselves if they want their anonymous accusations to be taken seriously.

“Do not even start with me that you’re just going to attack ‘sources’!” she said. “That is ridiculous!”

“You can not attack the stellar reporters of CNN, who have their sources, and would protect their sources—,” Bolduan said.

“The ‘stellar reporters’ of CNN,” Higbie said, “that I am going to attack right now and say, guess what, I don’t believe them because they’re staying anonymous.”

“If they stand behind the story, come out and face the camera,” he said.

“All I’ve been doing is face the camera, Carl,” a confused Bolduan responded.

“The people who are in that room,” Higbie said, drawing out a large pause on Bolduan’s part.

“We have anonymous sources, we protect them for real reasons, so the information that is important to the public can get out,” Bolduan said.

CNN contributor Keith Boykin, who was sitting right next to Higbie, stopped the interview to tell Higbie: “You’re embarrassing yourself.”

“You should not be doing this, you’re a better person than this, I am ashamed for you,” Boykin said.

Kate Bolduan is married to Michael David Gershenson, who is a Managing Director at The Carlyle Group, a private equity firm which many say embodies the “revolving door” corruption that defines Washington DC.