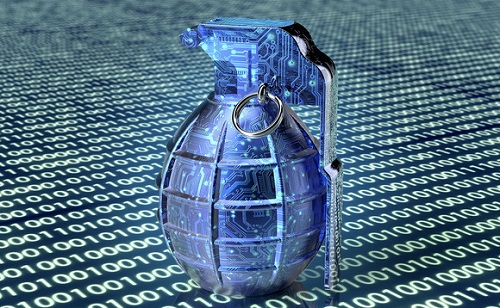 The world has been stunned over the past few days by the advent of “Ransomware;” the use of sophisticated cyber attacks on vital systems in order to (supposedly) extort capital from target businesses and institutions. I am always highly suspicious whenever a large scale cyber incident occurs, primarily because the manner in which these events are explained to the public does not begin to cover certain important realities. For example, the mainstream media rarely if ever discusses the fact that many digital systems are deliberately designed to be vulnerable.

Software and internet corporate monoliths have long been cooperating with the NSA through programs like PRISM to provide government agencies backdoor access to computer systems worldwide. Edward Snowden vindicated numerous “conspiracy theorists” in 2013 with his comprehensive data dumps, exposing collusion between corporations and the NSA including Microsoft, Skype, Apple, Google, Facebook and Yahoo. And make no mistake, nothing has changed since then.

The level of collusion between major software developers and the establishment might be shocking to some, but it was rather well known to alternative analysts and researchers. The use of legislation like the Foreign Intelligence Surveillance Act (FISA) to skirt Constitutional protections within the 4th Amendment has been open policy for quite some time. It only made sense that government agencies and their corporate partners would use it as a rationale to develop vast protocols for invading people’s privacy, including American citizens.

The issue is, in the process of engineering software and networks with Swiss cheese-like defenses in the name of “national security,” such exploits make vast spreads of infrastructure vulnerable to attack. I think it likely this was the intention all along. That is to say, the NSA and other agencies have created a rather perfect breeding ground for false flag attacks, real attacks and general crisis.

It should be noted that the Ransomware attacks which struck systems around the world used “Wannacrypt,” derived from an NSA exploit called “Eternalblue.” This program was designed to specifically target Microsoft Windows machines, no doubt using vulnerabilities which MicrosoftENGINEERED into their own software. Now, interestingly, a batch of NSA exploits was published online by a hacker group called “the shadow brokers” only last month. From the information I have gathered so far, it seems that “Eternalblue” was part of that data dump and that the Ransomware incident is directly connected.

Something else that is very interesting about Eternalblue — as CNN notes, similar exploits were used not long ago by the NSA to get backdoor access to financial data within the SWIFT banking system. This was rather odd because through international agreements the NSA already had front door access to such data. However, front door access can be tracked and traced and any illicit activity can be exposed. Therefore, the NSA must have had something more nefarious in mind than simply looking for terrorist activity, such as testing the effectiveness of their own exploits for future use in attacks.

I mention the incident with SWIFT because it brings up a potential danger that I don’t think many people have considered. First, let’s assume for a moment that groups like the “shadow brokers” actually exist and aren’t some kind of NSA created front. These groups are using the considerable weaknesses that corporations like Microsoft put in place for the NSA in order to reap profits through criminal enterprise or to commit terrorist acts. The NSA and its Silicon Valley partners literally created this monster; a monster which has the capacity to attack otherwise secure banking networks like SWIFT.

This begs the question — how much of the global banking system and global stock exchanges are open to attack with these same NSA exploits. I would suggest that ALL of them are.

Second, let’s consider for a moment the possibility that groups like the “shadow brokers” are mostly fraudulent fronts for establishment agencies and elitists. Consider that maybe, just maybe, the NSA is releasing some of these exploits on purpose to the public. Why? Well, one might consider that issue complicated, but to summarize, it may be very advantageous for international banks and governments to deliberately place financial systems at risk.

In my article The Economic End Game Explained, I outline in detail with evidence why the establishment is seeking a major economic crisis within the near term. Organizations like the IMF have been talking excitedly for the past few years about something they call “the great global economic reset.” The details behind this “reset” are rather vague, but the general notion is that the economic systems of today are going to evolve in a painful way and that certain elements of our fiscal structure could be wiped clean altogether. In order for such a “reset” to take place, some kind of crisis event would be needed or would happen inevitably as a consequence.

In order for a new economic system to be entrenched, the old system has to be dismantled; but how can banking moguls and globalist interests succeed in doing this without taking the blame for the ultimate social and geopolitical suffering and carnage that would result? Well, they would need scapegoats.

Some of these scapegoats will be political in origin. For example, the mainstream media has been pumping out non-stop rhetoric suggesting that the next global crisis will be a direct result of the “rise of populism and nationalism” within Western societies. Meaning conservatives, classical liberals and sovereignty champions are the new patsies for economic instabilities that the globalists built into the system long ago.

Some of these scapegoats, though, will be far more illusory and intangible.

It is my belief that agencies like the NSA are unleashing some of their own exploits to the public on purpose. But what does this accomplish?  For one, it makes the use of false flag attacks more viable. If attacks like Ransomware continue to escalate, the public may in a sense become normalized to them. What if one of these attacks targets major financial elements? Say the large networks of algorithmic computers that dominate stock transactions today come under threat; what would be the result? Most likely complete market disaster. And, almost everyone in the world will believe the culprit was some kind of terrorist hacking group, rather than the establishment itself, which has the most to gain from this brand of catastrophe.

Also, the establishment may simply be hoping that if they release enough of these exploits which they have been devising for years, someone will use them to attack the financial system autonomously. That is to say, the establishment does not necessarily need to use false flag attacks to bring down stock markets or banking networks. All they need to do is put the weapons out in the open and wait for someone to fall to temptation and do their dirty work for them.

I would compare this to the act of forcefully injecting millions of Muslim immigrants into western nations without a rational vetting process. If the elites want more terrorism in Europe, for instance, they don’t have to do all the work of forming domestic cells and training the members as they have done in the Middle East with ISIS. All they have to do is leave the front door wide open in the name of “humanitarianism” and allow the enemy to waltz right in.

This strategy gives the establishment plausible deniability while also giving them the crisis environment they secretly desire.

Our economy and the economies of most nations today stand upon a razor’s edge. Historically negative data is now reported weekly. Hard and “soft” data indicates a massive downturn is lurking under the surface. In fact, the ONLY elements of the economy which remain “positive” are stocks and some currencies. This is what we call a bubble scenario. The globalists have managed to stretch equities markets for years on the back of untold stimulus measures, but this illusion is quickly coming to an end.

Central banks are backing away from quantitative easing and steadily increasing interest rates, removing cheap debt as a tool to prop up stocks. The era of easy money is almost over. It seems to me that this is a perfect time for a trigger event that is completely unrelated to the financial elites, an event that will distract the public away from their culpability. This is not to say that a cyber attack on our market networks will be the only trigger event or distraction, but I am starting to think it will be a primary measure, no doubt while the world is mesmerized by James Comey “memos” and other such nonsense.

The NSA and other organizations have handcrafted global networks to fail, and not just fail, but fail spectacularly leaving maximum destruction in their wake. I do not think this was done without foresight. Events like Ransomware might only be the beginning. Watch this trend carefully, and be extra vigilant if cyber attacks begin to target financial institutions and systems. If this does happen, the “great economic reset” may not be far away.

After 8 long years of ultra-loose monetary policy from the Federal Reserve, it’s no secret that inflation is primed to soar. If your IRA or 401(k) is exposed to this threat, it’s critical to act now! That’s why thousands of Americans are moving their retirement into a Gold IRA. Learn how you can too with a free info kit on gold from Birch Gold Group. It reveals the little-known IRS Tax Law to move your IRA or 401(k) into gold. Click here to get your free Info Kit on Gold.