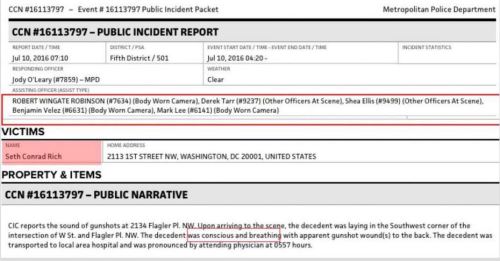 On May 15, 2017, Rod Wheeler, a private investigator affiliated with the family of slain Democratic National Committee (DNC) staffer Seth Rich who was murdered last July in Washington, DC, told Fox 5 DC that there is tangible evidence on Rich’s laptop that confirms he was communicating with WikiLeaks prior to his death.

According to WikiLeaks founder Julian Assange and the hacker Guccifer 2.0, Seth Rich had supplied thousands of damaging DNC emails to WikiLeaks.

In an exchange of emails, Hillary Clinton’s presidential campaign officials John Podesta and Joel Benenson vowed to “make examples of” suspected leakers, for whom there would be “stiff consequences”.

Wheeler, a former D.C. police homicide detective, believes there is a cover-up of Rich’s murder, that the D.C. Metropolitan Police Department (MPD) has been told to back down from the investigation, and that neither MPD nor the FBI have been forthcoming.

On Tuesday, a day later, Fox 5 DC tweeted that “DC Police say Wheeler’s assertion that detectives instructed to stand down regarding Rich case is false.”

Now, two new developments have come to light in the assassination of Seth Rich.

(1) Seth Rich was still alive when the police found him

Below is a screenshot of the MPD Public Incident Report:

Robert Wingate Robinson was one of the MPD officers on the scene of Seth Rich’s murder. On the Metropolitan Police Department’s website, he is listed as Robert Wingate-Robinson.

There’s a Nandi Robinson, 23, who lives with a Robert Robinson in Bel Air, Maryland, 57 miles from Washington, DC (Spokeo).

Seth Rich’s parents, Joel and Mary Ann, are asking people to disregard “conspiracy theories” about their son’s death, and insist that they firmly believe Seth was the victim of a random robbery as MPD claims, although the killer(s) did not take Rich’s wallet, watch, and cell phone.

Many top right-leaning outlets have dismissed intelligence and law-enforcement findings that Russia hacked and leaked private DNC emails in which top staffers were hostile to Vermont Sen. Bernie Sanders during the 2016 Democratic primary.

The insinuation that Rich leaked the emails has reignited the claim online that Rich’s dissatisfaction with the DNC, not Russian interference, influenced the election. On Monday, WikiLeaks founder Julian Assange retweeted the Fox 5 story.

Rich’s family said Wheeler’s assertions were “unsubstantiated claims” and that they saw “no facts, we have seen no evidence, we have been approached with no emails and only learned about this when contacted by the press.”

“Even if tomorrow an email was found, it is not a high enough bar of evidence to prove any interactions as emails can be altered, and we’ve seen that those interested in pushing conspiracies will stop at nothing to do so,” the family said in a statement.